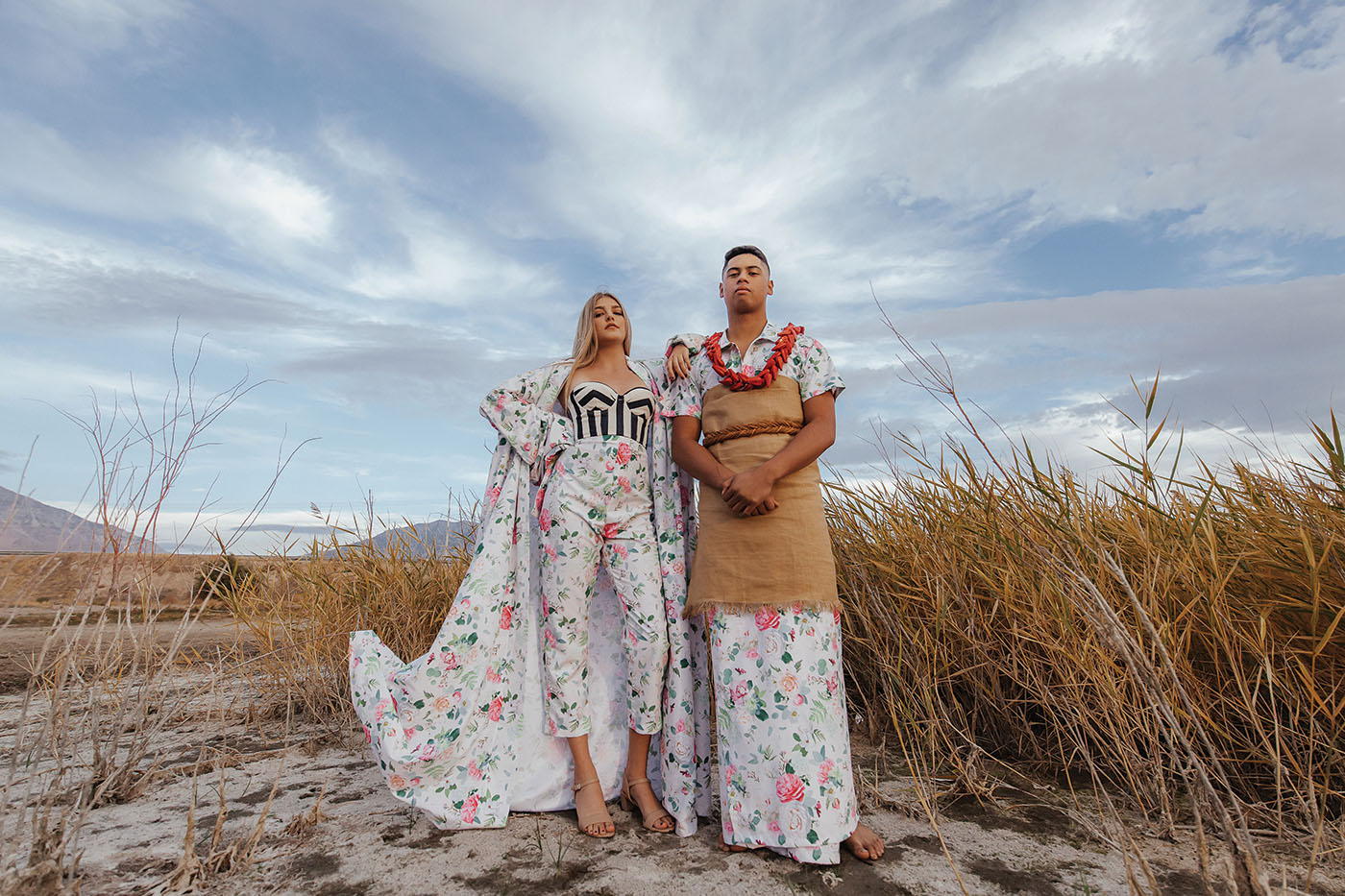 From LA and London Fashion Week to Season 17 of Project Runway, Utah-based designer Afa Ah Loo has experienced the upper echelons of the global fashion world. After appearing on Project Runway, he exhibited one of his most well-known pieces at The Commonwealth Fashion Exchange: an elegant evening gown with a bright floral print, small white shells donning the neck piece and large flowers on the back—a piece that is representative of his fresh, bold and positive design approach. Today, as a self-taught artist and someone who never thought he’d achieve success, let alone meet the Queen of England for that very show, he has a positive message about working to achieve your dreams while ignoring the categorizations society pushes on you.

“The one thing I want to say to young Polynesian and other creatives is that these big fashion brands are pulling from Polynesian culture and from Latin culture,” Ah Loo says. “It is our time to benefit from our culture and stop giving other people that power. That is one of the most beautiful things about being Samoan and Polynesian—our culture is so rich and full. We have so much to give.”

The roots of Ah Loo’s art go back to a tiny island and a traditional upbringing in Samoa. When he was a kid, he sold fruits and vegetables to support his aging grandparents who raised him. When he had time alone at home, he started using his mom’s sewing machine to piece fabric together in secret because of the heavy cultural stigma against males doing anything perceived as feminine. Raised in a family with three brothers and two sisters, later he made Sunday dresses as some of his first major sewing projects.

“What makes the world beautiful is that people create differently.”

When Ah Loo was younger, Project Runway was a few years behind in Samoa. Ah Loo watched as he learned to sew and create clothes for his sisters, keeping his hobby quiet for fear that “he’d be asking for it,” beat as he was by local boys for being too creative or sensitive. Despite the negativity, he set a goal to be the first Samoan fashion designer. He taught himself how to sew, draw and draft, and continued to create on the side as he went to BYU Hawaii, later moving to Utah after serving an LDS mission here. “I’m proud that I set goals and accomplished them. We really had very little growing up,” he says.

Fast forward to when he was accepted to design on Project Runway, and Ah Loo says the hardest thing was leaving his family—his daughter was five weeks old and his wife had to take care of her on her own. Being on the show, he says “You have to have thick skin to have someone else critique your work. The biggest lesson I learned is that some people are just not going to like your work. What makes the world beautiful is that people create differently.”

“Art is there to move people to be better.”

This celebration of difference, the hues between black and white, is at the heart of what Afa Ah Loo brings to his designing. “What I create is an extension of me and how I create, and there’s really no excuse for being a jerk. You can just say it’s not for me, but you don’t have to put down others. Fashion is exhausting in the way that it’s negative and critical,” he says. “You need to emotionally move people, because if you don’t, then fashion is just objects on people’s bodies. And people stick to nonsensical rules. Why can’t people wear what they want? Human beings are beautiful the way they are. I don’t tolerate that kind of energy.”

This positive and relaxed energy is also apparent in the ready-to-wear urban collection he created just after Project Runway. In his Facebook cover photo, an Asian-American model stands in a snowy RV park, with Winnebagos visible in the background. Another message that Ah Loo wants to carry is that fashion doesn’t just exist in the big cities like Paris and New York, “Fashion is in tiny rural villages in Samoa or in an RV park. Fashion is wherever people are,” he says.

“You need to emotionally move people, because if you don’t, then fashion is just objects on people’s bodies.”

With this kind of positivity, I ask what he makes of the people who spent so much energy trying to hold him back. He says, “I don’t remember any of the beatings that I got, but I remember the name-calling and the things people said to me when they were teasing me … but I let my work speak for itself. Art is there to move people to be better.”

You can see Afa Ah Loo’s work on his Instagram (@afa.ahloo), Facebook page (facebook.com/afa.ahloo), and through his humanitarian foundation, Alofa Humanitarian, an organization that supports humanitarian efforts in Samoa.