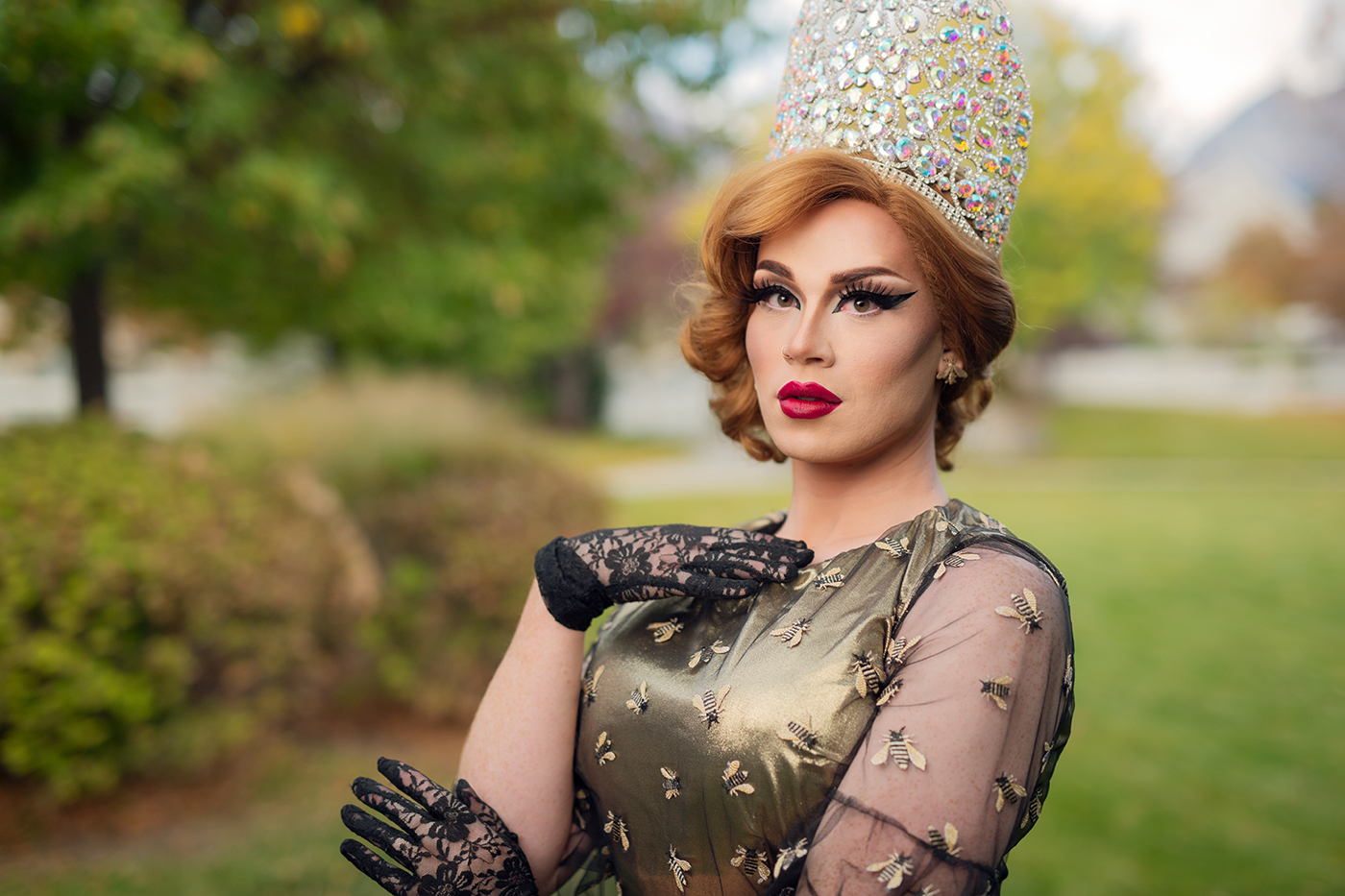 She calls herself just “a little ginger baby” torn from Cherry Valley, California, and hauled to Utah, all because her mom fell for a Mormon boy. But Rose Nylon is much more than that. Her beauty and grace has added greatly to the local drag community in both Utah Valley and Salt Lake City and has won her the title of Righteous Miss Provo in 2016, and she holds the current title of Miss Great Beehive State. Like the great Tom Jones once said, “She’s got style, she’s got grace, she’s a winner,” and with a shining personality and mug like hers, Rose Nylon is pure (rose) gold.

Rose grew up just outside of L.A. then moved to Utah, and has gone through many phases of gender expression throughout her life. “Currently, ‘gender-fluid’ feels the most correct,” Rose says about their identity, “and I really feel most comfortable with either she/her or he/him. Just don’t call me ‘it.’” Duly noted! When they were just a wee teenager, Rose became exposed to the wonderful world of drag through iconic American media, such as the film To Wong Foo, Thanks for Everything! Judy Newmar and Emmy award–winning television show RuPaul’s Drag Race. For the initial birth and conception of the drag queen known as Rose Nylon, she says that “feminine influence has just in general been very apparent and appreciated as I have grown up, and of course, I’m happy when I can emulate a piece of that.”

“I really like giving a lasting impression on the audience, whether I made you laugh or cry.”

A born entertainer, Rose Nylon has been performing for family and friends since they could walk. An avid theater kid and Drag Race fan, Rose has always loved incorporating camp alongside glamour in their performances, which has carried over to their drag profession.  From what I can tell, Rose portrays a confident, gender-fluid performer. She draws inspiration from fiery women like Lucille Ball, Disney princesses, pinup girls, iconic horror-movie femmes and pretty much any other redhead bombshell.

Rose is an extremely talented makeup artist who says she gets her stunningly soft features because she “just got lucky looking more like my mom than my dad” (that is some good-ass luck). She has been practicing makeup looks since middle school and with all that practice, her current look is reminiscent of a redheaded Lana Del Rey. The visual similarities aren’t the only thing these two beauties have in common, as Rose is also a talented singer and uses her own voice in many live performances.

“Not always, but very often, I like to sing with my actual voice for a drag performance,” Rose says. “Especially when performing a song that isn’t as upbeat or happy, I think using your actual voice really helps the audience connect more to the performance and the performer. I really like giving a lasting impression on the audience, whether I made you laugh or cry. Making fun of myself generally is received well.”

“I’ve always believed that you either laugh or cry … [and] I look cuter when I laugh.”

Since the start of the pandemic and the closure of most nightclubs and venues, Rose has been working with her sister and roommate, Ben Morgan (also known as Ivory LaRue), creating content for their digital drag events called 8-B!TCH. Rose consistently hosts, and the programs usually feature at least one prerecorded video performance. A recent video produced by Ivory starring Rose is an homage to Broadway composers Winnie Holzman’s Wicked and Jeff Richmond’s Mean Girls set in a Brady Bunch TV setup.

“Being creative and putting time and effort into making something visually enjoyable/intriguing/etc. really helps you keep your mind off of the world burning around you,” Rose says. “I’ve always believed that you either laugh or cry … [and] I look cuter when I laugh.” Rose hopes to continue working in the digital realm of performance art because of the freedoms she can’t always bring to life on a stage. The 8-B!TCH performances Rose puts together are beautiful, strange and include cosplay and what she calls a “Tim Burton/Johnny Depp relationship” between herself and Ivory.

Rose Nylon is a stunningly beautiful queen, a well-spoken and confident individual, a talented artist and a true, gilded goddess of Salt Lake City. Be sure to support her work and stream her upcoming 8-B!TCH shows @rose.nylon on Instagram. Also, always tip your local drag queens, and you can tip Rose on Venmo @CodyScottRose. And please don’t be a dummy and get out and VOTE!