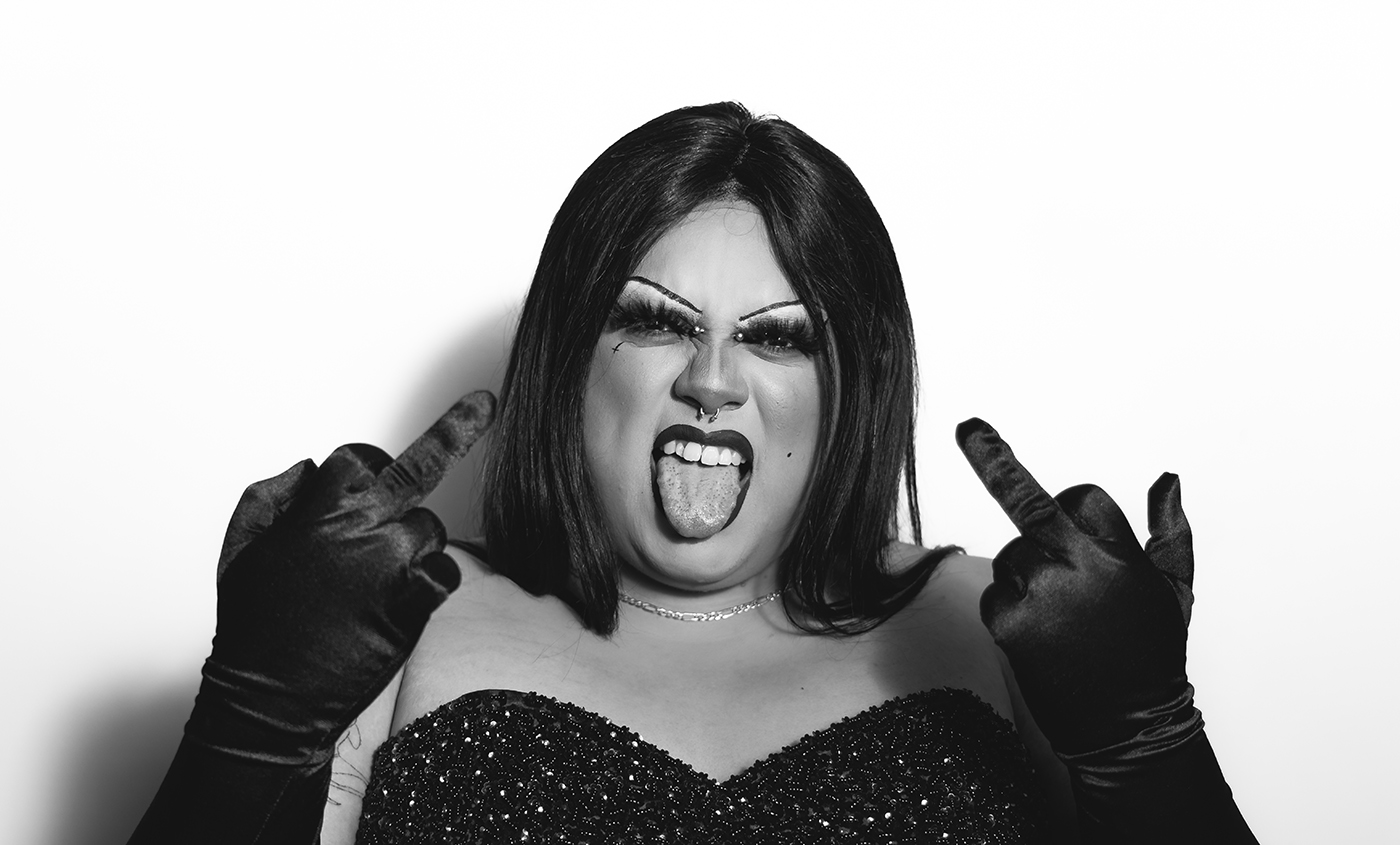 There’s something alluring about a performer who can offer a horrifying performance while still turning out polished looks. I’m not sure whether it’s my affinity for all things spooky or my fascination with individuals who just have a way of painting with makeup, but I’m all for the combination of horror and drag. A true scream queen, Agony Ray embodies a blend of the two artforms without being boxed into just one genre.

Before Agony became the scarily stunning queen she is today, she was used as a means to process the oftentimes exhausting human experience. Agony goes offstage by the name of Ahli, and he says creating his drag persona was inspired by a low point in life. “When I created Agony Ray back in 2015, I really felt hatred for myself,” says Ahli. “I just wanted to be someone new, so I decided that through the power of drag I can create them.”

Drawing inspiration from symbols of queer culture like Hairspray, Rocky Horror Picture Show and Divine, Ahli came up with Agony Ray. Settling on the niche combining drag and horror felt right to Ahli, and also helped him heal from trauma. “Being able to turn into a monster or a different person helped me process pain, and it also made me feel more confident in myself outside of drag,” he says.

“I just wanted to be someone new, so I decided that through the power of drag I can create them.”

Agony Ray first hit Salt Lake’s drag scene at a show hosted by 8-B!TCH in 2017 at Club Area 51. There, on a dimly lit stage and room full of people dressed in their best “weirdo”-themed attire, Ray made her debut by performing Bebe Rexha’s iconic “I’m Gonna Show You Crazy.” Although she recalls being beyond nervous for her first performance, Ray’s creative aesthetic and give-no-fucks attitude quickly helped them find their place in the drag community.

The persona of Agony Ray has undergone a few changes over the years, going from all out FX horror to venturing into a more refined horror glam. In her early performances, Agony would don the stage with a mouth full of razor-sharp teeth and tug around a pig-headed stranger on a leash. In another show at Club Try-Angles, Agony dressed in their best It attire and gleefully attacked a teddy bear wearing a yellow raincoat while lip-syncing to a metal soundtrack. Although Agony says her roots will always be in horror, she felt herself being boxed into the genre. “I started to feel like all I was doing was horror/FX and I wanted to show versatility, that I can be glamorous, too,” she says.

Now, Agony described her aesthetic as “very punk rock meets hood bitch and personality that says fuuuuuuccckkk iiiiiittt.” While her performances still offer something spooky, she’s traded out the horror prosthetics for a bold, smoky eye and full, red lips. “Agony Ray as a performer is very wild and free,” Ahli says. “I can bring you all the high-energy dance you want, or I can bring you all the horror you could ever love and hate.”

“Ray’s creative aesthetic and give-no-fucks attitude quickly helped them find their place in the drag community.”

In addition to story-driven performances and energetic stage presence, Agony often sings live at her shows. Fans of drag got to witness this talent most recently in her performances with 8-B!TCH’s digital drag show. “I loved performing with 8-B!TCH so much; it honestly showed just how creative everyone in the whole city is, and I always felt excited to see what’s next,” she says. Agony plans to continue performances with the drag collective and hit the stage in an upcoming show at The Complex on Oct. 15.

Whether she’s singing live in a digital show or raising fear in a clever stage performance, Agony Ray is a queen you remember. See for yourself in her Oct. 15 performance and send her a tip on Venmo @Agonyray. You can also follow her on Instagram @Agonyray.