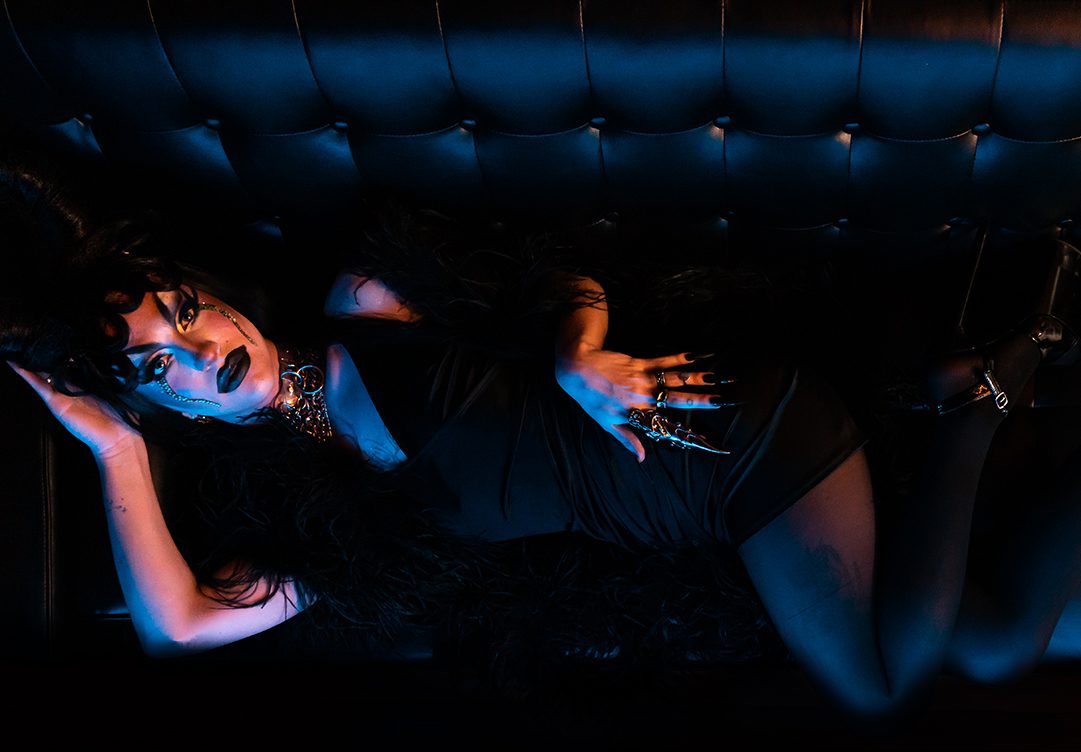 Stepping straight out of a high-fashion fantasy world, Lady Façade is a glamorous, young drag queen whose enchanting presence leaves you drooling for more. Every time she turns out a new look, her aesthetic is redefined, refusing to be boxed into one distinct persona. A gothic villain one day and a space cowgirl the next, Façade exudes “main character” energy wherever she goes.

Façade, aka Seth Winebrenner, knew she was a force to be reckoned with at the ripe age of 12. For years, performance and art was her main mode of expression, but when a role in the theatre finally gave her the spotlight, there was no turning back. “I secured the role as ‘The Minotaur’ in Theseus and the Minotaur, [and] I realized I was born to be a star,” says Façade.

Spending years on the stage gave her a taste of transformation, and her love for makeup and fashion soon blossomed into an infatuation with drag. Façade describes her first experience with drag as a mischievous attempt to disguise herself as her older brother’s stolen ID. Adorned in outrageous makeup and a fistfull of glitter, Façade got a glimpse of a dazzling world she was destined to join. “I looked like a ripped-out page from a kindergartener’s coloring book: lips stretching from cheek to cheek and eyes glued shut from lash glue,” she says. “But that night, I attended my first-ever drag show, and my life was truly changed for the better.”

“I finally felt accepted into a community that stood for glamor and rhinestones, and couldn’t be happier”

For some time, Façade cloistered her appearances within the comfort of her home, perfecting flawless makeup techniques and drawing inspiration from global fashion icons. After a month of practice and loads of  “bedroom queening,” Lady Façade traveled to L.A. to attend the infamous RuPaul’s DragCon in 2017. Making her first appearance as a fully realized queen, Façade recalls the affectionate response by the community. “I finally felt accepted into a community that stood for glamor and rhinestones, and couldn’t be happier,” she says.

Façade has refined her art over the years, although her aesthetic can hardly be contained to one style. “Part of the fun I find in drag is dressing up and being whoever I want to be,” she says. While each expression varies, bold eye makeup, big lips and a skillfully contoured nose are Façade’s specialty—each one accentuating her striking features. Every character embodied by Façade is a labor of love, beginning as a rough sketch and then brought to life in the final design. The eccentric personalities found in fantasy animes and games are a huge source of inspiration for her drag, as well as iconic fashion designers like Alexander McQueen and Thierry Mugler. The entanglement of fantasy with fashion is manifest in Façade through elegant, androgynous monsters and high-femme glamour queens, to name a few.

Façade’s knack for transformation is an ode to drag as a powerful artform, and allows her to explore different aspect of herself. “It’s crazy to think that a little (or a lot of) makeup and a few extra accessories can make someone gain a whole new level of confidence and hopefully help them realize something about themselves they didn’t know before,” she says. By curating diverse makeup looks and creating eccentric characters, Façade is able to play with the boundaries of gender and identity. “As a nonbinary person, my drag follows me around in my everyday life. The amount of drag that I have on plays a part in certain characteristics of myself,” she says.

Before the pandemic placed a hold on in-person drag shows, Lady Façade would grace the stage with showstopping looks and neck-breaking hair flips. Energetic voguing and a few floor stunts would often find their way into her shows, though her preferred performance style is interacting with the crowd. “When I perform, I want to be dancing with a crowd, not necessarily for a crowd,” she says. One of Façade’s favorite performance memories is when she and Nikki Steel opened for Farrah Moan in February of last year. Façade fondly recalls, “The fact that my drag brought so many people from different aspects of my life into one room still blows my mind.”

These days Façade has thrown herself into makeup artistry, serving looks that make their way onto Instagram or her newly created TikTok account. Façade has gained quite the following on the creative platform and is thankful for the opportunity to present more of her talent to the world.  “I’m so grateful for social media to keep us connected and give us a space to share our art and ideas,” she says.

“When I perform, I want to be dancing with a crowd, not necessarily for a crowd”

This gorgeous chameleon queen is just getting started, and with each new character she creates, Salt Lake gets a bit more bold and beautiful. Support the drag community through Venmo tips and social media shares, and follow her accounts on Instagram and TikTok @ladyfacade. With skillful makeup ability and an intriguing vision, this queen has a radiant future. I have a feeling that it won’t be long until the world knows the name Lady Façade.