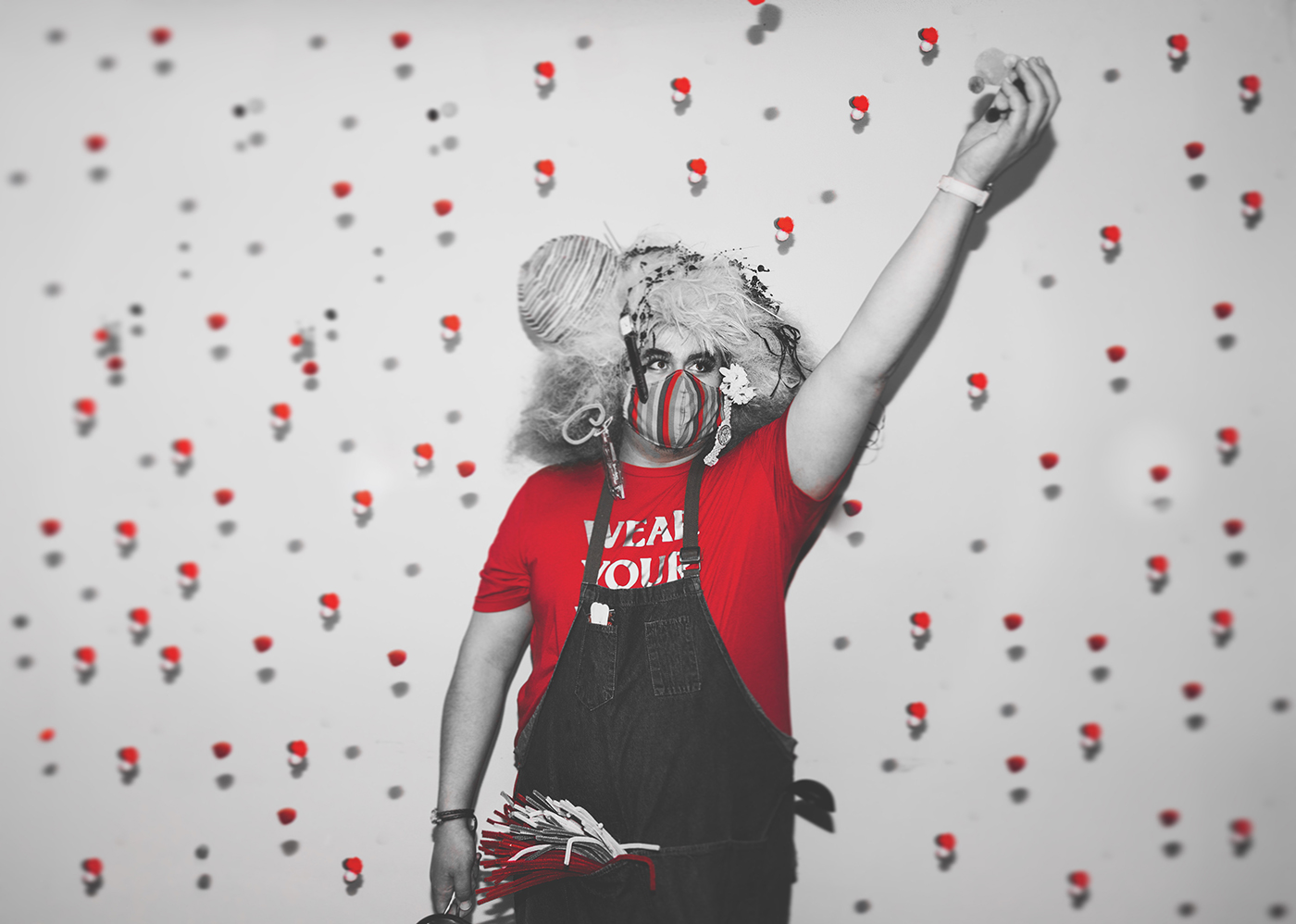 Luna Slipstream is a show-stopping drag queen with a sharp tongue and an affinity for “clowning.” Known offstage as Dan Varas, Luna animates Salt Lake’s drag scene with live singing, biting political satire and bearded brilliance. Having endured several hardships throughout this chaotic year, Varas has turned to drag as a creative safe haven where he’s been able to turn dust into diamonds.

A Salt Lake native, Varas has been a performer all his life. After witnessing the power of stage presence as a young child, his interest in theater became a career pursuit. Varas studied theater at Southern Utah University and then went on to serve on the Board of Directors for a community theater in Pocatello, Idaho, for several years. After gaining valuable experience producing, directing and acting, Varas moved back to Salt Lake where he discovered the The Bad Kids Collective and the 4 Starr Review at Club Try-Angles. Varas says that this is when his career in drag began, “Back in what the kids are now calling ‘the drag Middle Ages.’”

While Varas had always harbored a love for drag, it wasn’t until his then-roommate Sissy Riot entered into The Bad Kids drag pageant that he tried it out for himself. When Riot won a pageant title, Varas decided to show up in drag, and in his searched for his alter-ego, he discovered a familiar face. “Luna fell out of the sky and landed right on top of me, and I never looked back,” he says.

Luna Slipstream made her first appearance in Varas’ life long before she took the stage. “She is actually a character I created based on a science-fiction short story I wrote when I was 14 called ‘The Fat Riots,’” he says. Luna’s story as a time-traveling space/pirate/cyborg from the year 5047 is filled with alien revolutions, intergalactic crime schemes and a love transcending time. The “Lunaverse” is a series of winding stories that Varas has been writing for the past five years, and he eventually wants to compound them together in a digital graphic novel.

“Luna fell out of the sky and landed right on top of me, and I never looked back.”

As complex and daring that Luna Slipstream is on paper, she is equally fascinating when Varas brings her to life onstage. Each performance gives Varas an opportunity to explore Luna’s persona, and when she and Sammee St. James opened for Sasha Velour, they pulled out all the stops. From there, Luna’s aesthetic transformed from conventional makeup and rock n’ roll–inspired costumes to “stupid fashion and full-blown clowning.” Big hair, body paint, masks and sometimes a bright clown nose are Luna’s chosen accessories. Another trademark of Luna is a bold and beautiful beard, an attribute Varas says is emblematic of his resentment of hegemonic masculine/feminine standards.

“I have always resented being told that I’m ‘not being a boy correctly,’” Varas says. “Then when I started doing drag, there were, of course, voices saying I wasn’t being a drag queen correctly.” His response to these critiques was to emphasize all the things the mainstream deems illegitimate to the art of drag: “Oh, I’m not supposed to use my own eyebrows? Guess I’ll drag a mascara brush through them against the grain so they stick out. Heels? More like combat boots. Corset?! Actually, yeah, gimme that waistline. Or here is my belly as Santa or Fat Thor, depending on the number.”

“And when push comes to shove, I will send a fully armed battalion to remind you of my love.”

Luna’s distinct appearance is matched by her exciting performances, all of which include live singing, hard drinking and thought-inducing narratives. Sharp social and political commentary often makes its way into Luna’s shows, something that Varas says is inherent to drag as an artform. “Drag is in your face and 100% political and constantly changing,” he says.

In a recent virtual performance, Luna donned a bright-orange face and white Victorian wig—serving us King George III with a twist of Trump. After angrily tweeting attacks on American colonists, Luna showcases her theater-trained voice as she sings lines like, “And when push comes to shove, I will send a fully armed battalion to remind you of my love.” Luna’s quick-witted words come to life when matched with her bright, campy aesthetic, a skill that makes you ponder her performances long after she’s left the stage.

Luna’s satirical performance style was most recently featured in a short film created by Varas and Sammee St. James called The Salties Clown Cries the Most. The pair created the project as a submission to the Salt Lake Film Fringe Festival, and it soon became a source of optimism when Varas was diagnosed with Type 1 diabetes.

“Drag is in your face and 100% political and constantly changing.”

“Normal amounts of 2020 depression combined with an entirely new lifestyle as a diabetic, I wasn’t feeling particularly inspired or motivated,” Varas says. “Then there was the announcement for submissions to the Fringe Festival, and now that it was digital, we had so many options.” Varas and Sammee put their improvisational talents to a test, making up each sketch on the spot and filming the whole anthology on Varas’ phone. The result is a colorful combination of offbeat news broadcasts, clown-led cooking courses and campy movie trailers, to name a few.

Apart from delivering one-of-a-kind performances, Varas is always finding ways to uplift and interact with Salt Lake’s queer community. The day of Luna’s photoshoot for this “Bold & Beautiful” feature was also International Transgender Day of Remembrance, and Varas was joined by their boyfriend Kenzie, Sammee St. James and SLUG photographer Kelly Williams in honoring each life lost this year. The group took part in a memorial organized by Dallas Rivers of Project Rainbow, an organization working to increase LGBTQ+ visibility in Utah by leasing pride flags across the state. By placing candles at the base of trans flags representing each person whose life was lost or taken, the four were able to take part in a moving and important ceremony—one whose commemoration of tragedies within trans communities deserves more attention in society, particularly through media response. Learn more about Project Rainbow and see how you can get involved at projectrainbowutah.org.

Watching this extraordinary space clown, I’m excited to see how Luna Slipstream continues to push the boundaries of drag and make Salt Lake’s scene more daring as she does so. You can watch Luna’s performances featured in upcoming 8-B!TCH shows hosted by Rose Nylon and Ben Morgan; find live streams of the show at facebook.com/utahdigitaldrag. As always, don’t forget to support your local drag queens so they can keep doing what they love—you can tip Luna on Venmo @lunaslipstream. Keep up with Luna by following her Instagram @lunaslipstream, and watch out for future projects by Salty Clown Productions!