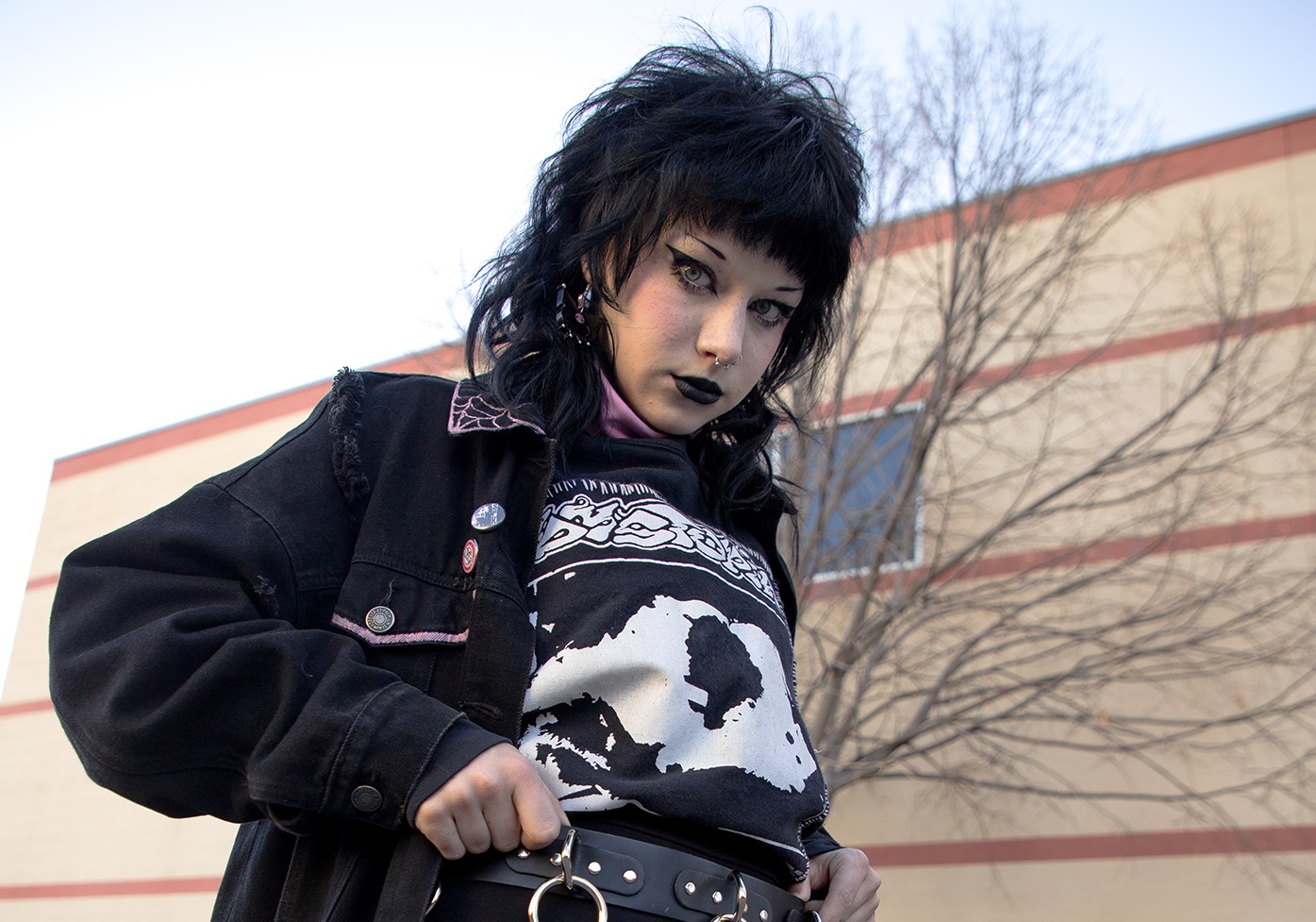 Emmaly Anderson is a local musician who does vocals for powerviolence band NARC and works for buy-sell-trade clothing shop Pib’s X-Change. Anderson loves the ’80s and amalgamates her punk background with the agency of choosing from a hodgepodge of clothing options while working at Pib’s. You can see her eclectic style on display here.

Every month, SLUG Style features a distinct and unique member of the community and asks them why they do what they do. Exploring more than just clothing, SLUG Style is an attempt to feature the people who give Salt Lake City flavor through personality and panache.

SLUG: What are your stylistic influences? This could be a band, decade, fictional character—anything.

Anderson: I’ve always loved the ’80s—punk and goth babes like Siouxsie Sioux and Joan Jett have inspired me since I was a little kid. My childhood love of anime and alternative Japanese street fashion guides my taste, too. The character Misa Amane from Death Note and other cartoon goth girls have inspired me for a long time. My style changes a lot based on how I’m feeling. Sometimes I like feeling cute and feminine, but I also like to wear casual clothes that make me feel androgynous.

SLUG: Tell us about your band NARC—your role in the band, about the powerviolence you play, lyrical/ideological themes, and how your sense of style intersects with the band and music/punk overall.

Anderson: I do vocals and write lyrics, my boyfriend Spencer plays guitar, and our buddy Tyler does drums. I mostly write angry political songs about killing cops and hating capitalism and stuff like that, but sometimes I just complain about my petty personal problems. We play powerviolence because it’s fun—it’s high-energy, angry, chaotic, therapeutic. I guess our music ties in with my style because they’re both constantly evolving creative outlets where I do whatever I want without limitations.

SLUG: When buying clothes at Pib’s, which items never make it to the floor because you’ve instantly pulled them aside to buy for yourself?

Anderson: Hooters shirts! I have a small collection of them from Pib’s, just because I think they’re funny. If I find a shirt for a band I love, it’s coming home with me that day. There are plenty of things that come in that I immediately feel a need for.

SLUG: What about working for Pib’s has influenced, shaped or helped you reenvision your style?

Anderson: My style was much more static before I started working at Pib’s—I kept myself in boxes and had a limited idea of my own style. I’m exposed to a lot of different styles and clothes that I didn’t think I would wear but end up loving. I’m much more open-minded and have fallen in love with plenty of items and styles that I didn’t think were “me” before.

SLUG: What are your other interests or hobbies? What is the hobby or interest that you have that no one would realize to ask you about?

Anderson: I play video games quite a bit, mostly Animal Crossing. I was a figure skater for a long time, but I gave up on it recently—maybe I’ll get back into it with enough money, motivation and free time. That’s the only hobby of mine that’s unique or interesting at all. I’ve been trying to spend more of my free time creating art, mostly collaging and customizing clothes.

SLUG: There seem to be some eclectic influences in your style that you unify and make your own. What all goes into how you conceptualize and put together your style?

Anderson: I take inspiration from celebrities and artists I’m fond of, but I get most of my inspiration from people I see everyday at work and online—that’s where I see the most creativity. I get a lot of ideas just from cool people I see out and about or when I’m scrolling through Instagram. There are some parts of my style that aren’t necessarily inspired by anyone in particular—sometimes I’m just drawn to clothes and there’s no thought behind it.

Anderson: I cut my hair into a mullet so that my hair would reflect my style without needing any extra effort. I do similar makeup every day because I just really like big eyeliner and I think I look best with it.

SLUG: Are you always “on,” or would someone see you at the grocery store, for example, with less elements of your style?

Anderson: I’m usually “off,” to be honest. I’m trying to be content with myself without putting in the daily effort of getting dressed up and putting on makeup. I always get ready for work because I see so many people, but if I’m having a chill day, I don’t really bother—I go in public hungover in sweatpants all the time.

SLUG: What are your favorite pieces and/or outfits and why?

Anderson: This Wilson leather jacket with these sweet shoulder pads that I actually just bought at Pib’s. I feel way cooler whenever I wear it. These motorcycle boots (another Pib’s find) are my favorite shoes because they look badass, and they’re actually the comfiest ever. I have a decent collection of goth lolita dresses from the Japanese brand Moi-Meme-Moitie that I adore, but I don’t really wear them because they’re too nice and I don’t want to ruin them.

SLUG: How has your personal style evolved over time?

Anderson: I’ve gone through a lot of phases ever since I was a 10-year-old emo kid. My personal style now is just a goofy combination of the different styles I’ve been into, and it keeps changing all the time.

SLUG: How may people support NARC?

Anderson: NARC is on Instagram @narcpv. We just released our demo on narcpv.bandcamp.com, if you want to check us out.