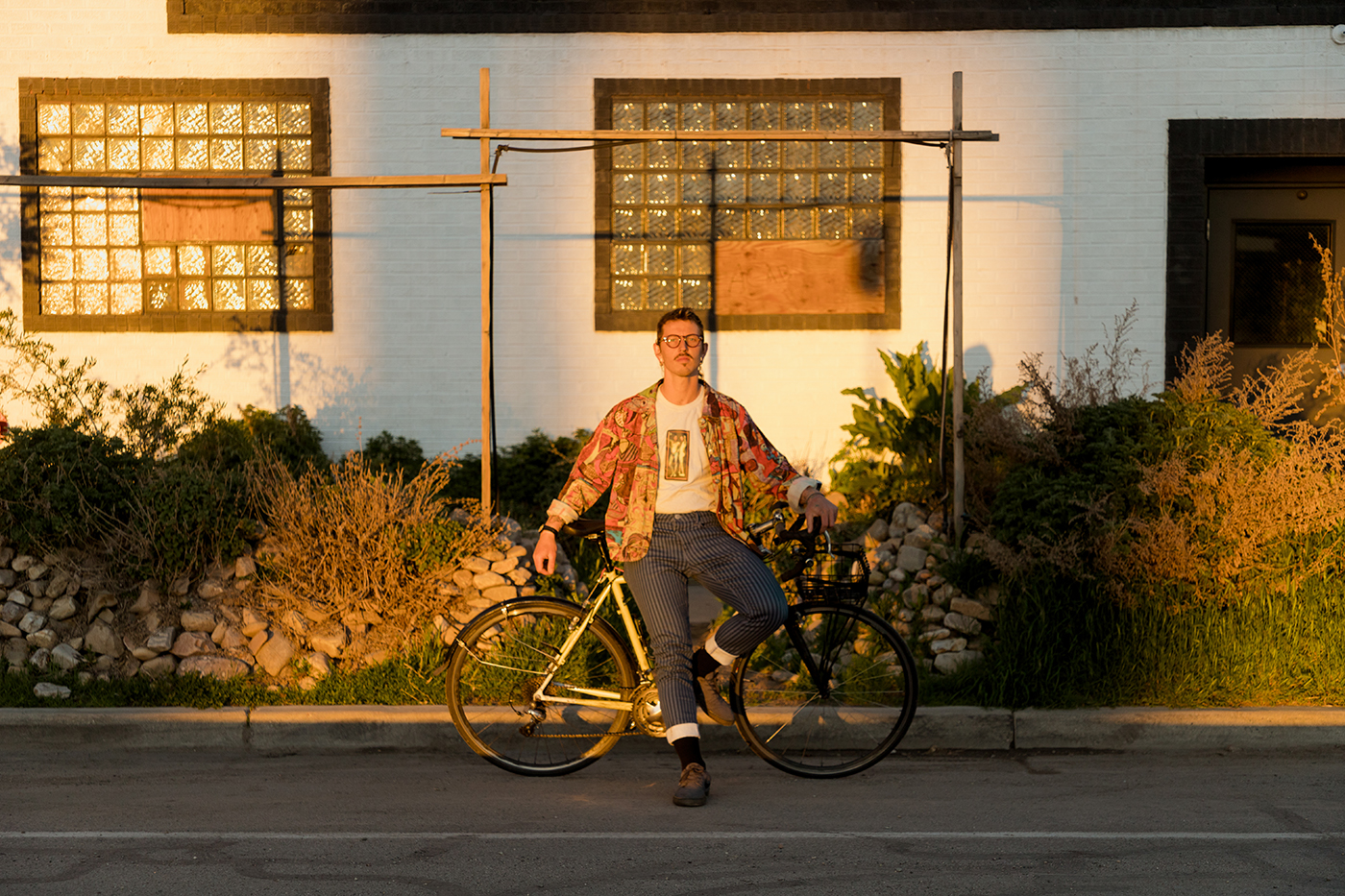 Goldin Kidd is one of those people whose bike seems almost a part of them. Add to that his penchant for using photography as a liberating medium and experience, and it becomes clear that Goldin’s style of dress is just as much a form of free-flowing expression as cycling and taking photos. In this installment of “SLUG Style,” we get a snapshot of Goldin’s blissfully mutable nexus of style.

Every month, “SLUG Style” features a distinct and unique member of the community and asks them why they do what they do. Exploring more than just clothing, SLUG Style is an attempt to feature the people who give Salt Lake City flavor through personality and panache.

What are your stylistic influences? This could be a band, decade, fictional character—anything.

The way a field of grasses moves when the wind blows across it, that iridescence that all street signs tend to have at the right angle. That chunk of sunlight that can only make it to this spot at this exact time of day. The release that follows a night of dancing. Punk and queer and DIY culture/ethics/aesthetics. Anarchist values at the interpersonal level. States of wonder and giddy and deep introspection. The dismantling of shame, integration toward greater wholeness. The righteousness of the underdog. The bravery of resistance to the status quo. The Great Salt Lake. Photographers like Ren Hang, Nan Goldin (my namesake), Josef Koudelka, Robert Mapplethorpe, Ryan McGinley, Benoit Paille, Sally Mann. Lately, Alejandro Jodorowski’s films. Crayola Crayons, Garbage Pail Kids, The Goonies. Women rappers who sound like they are in charge.

What are your interests or hobbies? What is the hobby or interest that you have that no one would realize to ask you about?

I don’t know how many people outside the people in my immediate life would know this, but I’m an intermediate/advanced astrology student. I love it, and find it to be an endlessly fascinating and useful tool to be building my skillful proficiency with. If you ask me about it, though, I might accidentally talk your ear off. I find it to be an endlessly curious lens to engage the world through. I also generally love playing sports. If you have a pickup soccer league, I probably want to play.

People may often see you around town on a bike. What’s your story with cycling?

I grew up riding a bike—it was the gateway to adventure and exploring beyond my immediate neighborhood, all up till I moved overseas at 12. Biking, for me, has always opened up potential for fun trouble to get into. My very first time riding a bicycle without training wheels was at like 3 or 4, and i just immediately crashed into the neighbors mailbox and got all cut up. Later on, I was building jumps to go off, casually shooting bottle rockets from my frame as I rode, zooming around the forest trails outside my neighborhood. And then I moved to Salt Lake when I was 20 and quickly found SLC’s more DIY bike culture and got into biking in yet a new way. Alleycats, big group rides, tons of fun and interesting people, freakbikes, bike porn, full-moon rides—all of it was new to me and exciting. All that to say that I grew up playing on bikes, but SLC bike culture brought cycling into center focus for me and a decade later. Cycling is still a thruline for me.

What kind of cyclist do you see yourself as?

I’m a jack-of-all-trades, commuting and pleasure cyclist, primarily. Alleycats were the most athletic cycling I’ve ever done, and I haven’t done any of those for a minute. I recently bought a truck, but before this winter, I didn’t own a car for like eight years, so biking was the main way I got to anywhere. And I still bike as my way around town often. I think cycling is inherently pleasurable to some degree, but pleasure-riding for me is riding around with friends, taking the scenic route, riding way up to behind the capitol to catch a sunset, zooming the whole way back down into Downtown. City Creek Canyon is a favorite haunt of mine. I love critical mass rides or other large group bike rides as well for the generally lighthearted chaos element they always have. I also really do love a little higher-intensity cycling, like riding in busy traffic. It awakens the Lucas Brunelle’s “Line of Sight,” fixie-boy-mashing-fantasy within me, ya know?

How does your bike work into your personal style?

I think a lot about what different items would feel like to wear while biking, so there becomes a kind of utility-minded style I take on sometimes. Like, I love my highwater overalls, and they are 10 times more likely to get caught under my chain cuz they’re the perfect length for it. Like if I wanna wear something cumbersome or flowing, there’s just gotta be outfit changes, ya know? Oh, and pretty much all my pants have chain-grease stains. I think being a consistent cyclist comes with a certain level of hardiness as well, which I think is a throughline for my general style.

What’s your favorite part about riding your bike?

I love the pace of being a cyclist. It’s always slow enough to take in more scenery than driving by ever affords. Biking is a pace that encourages my being cognizant of the world around me. And I find it consistently pleasurable. Even when I’m doing it in a way that is hard work, I most often am doing that hard work in pursuit of something pleasurable, like a bomb sunset view or a cool dip—something I wish Salt Lake had more of! Bikeable, natural swimming holes are top tier for me. It’s a kind of fun that I can do solo or with other people, and I really, truly love biking as a social activity. Something I also really love is that biking has this feeling of freedom (and sometimes danger) that comes with being so unshielded from the environment. Like, to bomb down a hill on a bike is a very visceral and stimulating experience. And when I’m bombing down a hill, I often have some awareness of the delicate bag of bones I am, hurtling through space unshielded from surprises and potholes.

You’re also a photographer. What kinds of photos do you like to create?

Oof, all sorts! If art-making is the intention, I’m always trying to take impossible ones. Disorienting ones. Ones that your brain hesitates to make sense of. Art-making is probably the kind of images I actively think about the most, but I’ve had a camera in hand since I was 13. So at this point in my relationship to it, photography has become an integral part of how I observe, witness and take in the world. And with that, I think I have many modes as a photographer. Sometimes photography is an expression of an affectionate gaze; sometimes it is a tool of exploration or understanding; sometimes it is a record-keeper; sometimes it is an emotive release. I like making honest images, though. Even when they’re disorienting or seem impossible, most of my photos are honest. I’m also interested in photography as a tool to challenge and dismantle shame, using it as a means of looking closely at things I or we have learned to be ashamed of. I think photography offers many opportunities to reclaim personal power where we’ve felt disempowered, and I’m always interested in creating those images. I’m interested in photography that complicates perceptions or demands to be thought twice about for conveying a delicate or nuanced reality.

To what extend would you say photography interacts with your style of dress or style in general?

I think being a photographer has given me both a greater awareness of and investment in my style, because some part of my brain is constantly scanning for images to capture or fantasizing about creating images. Doing so really triggers the awareness that I am also being seen and also could be a part of my own or somebody else’s image-making. I don’t always have super ambitious style or fashion, but I am almost always in consideration of what I look like. So when I do dress loudly, I do so with the awareness that I, too, could become an image. We all have cameras in our pockets most of the time, so I think our collective awareness of being perceived is much greater than it used to be. I think I also use both photography and style of dress as different media for communicating ideas or expressing what I am thinking about. And I think my values are really woven into both forms of expression. Many of my DIY fashion things are done with the awareness that images are being captured all the time. Either with cameras or just as associations lodged in people’s perceptive awareness.

Both my bike and my camera are consistent companions for me, and they end up overlapping a lot. I used to be very active in taking photos at bike events, and I always have a camera with me on the bike adventures I get into with friends. Both come together for me as mixed-utility, mixed-business-and-pleasure tools and also means of navigating the world. And I’m often doing them in tandem, whether the bike ends up making it into a shot or not. I’ve also fantasized about making bike-centric erotica, thanks to the touring amateur-porn festival, Bike Smut. Maybe that will be a future intersection.

Are you always “on” or would someone see you at the grocery store, for example, with less elements of your style?

I like feeling like I look good, but I think I primarily have a low-effort orientation. I’m someone who often wears subtle variations of the same outfit for a week. That said, I am also someone who is willing to go ham and lean fully into donning a look when there’s an event or activity that calls for it. So, I’m almost inclined to say I’m “off” way more than I’m “on,” though I do think my “off” still has a lot of personal flavor.

If you had to describe yourself in three words, what would those be?

How has your personal style evolved over time?

My style is constantly expanding as I see/experience new things, because my style is often a reflection of what is happening in my interior experience. And I love trying and seeing things done in new ways, so over time, I’ve grown in my willingness to try different things or lean into different aesthetics on a whim.