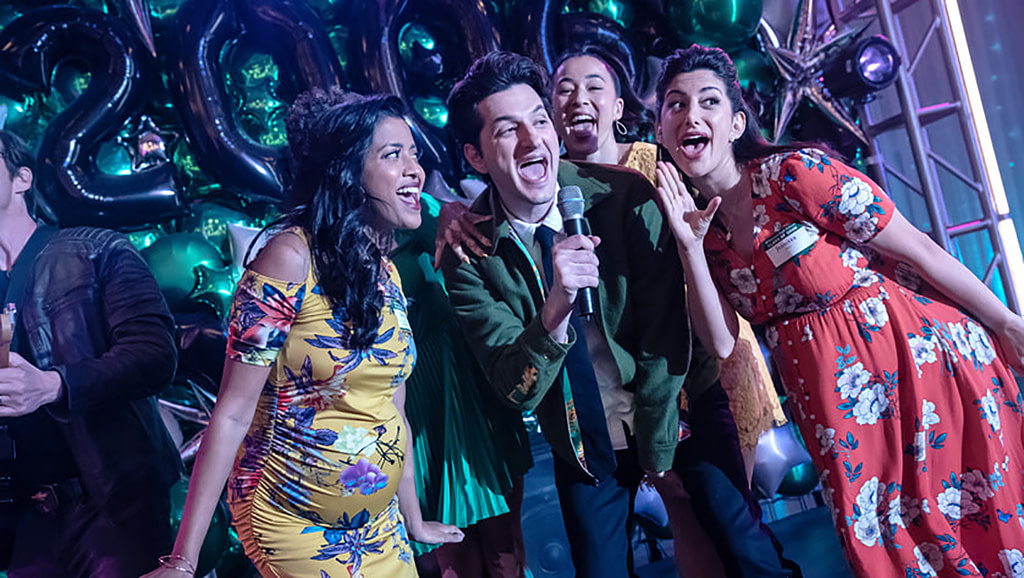 How can I survive going to my high school reunion? We’ve probably all thought that at least once, but in The Afterparty, the new comedy series from Academy Award winners Chris Miller and Phil Lord (The Lego Movie, 21 Jump Street), that question becomes much more literal with an all-star cast that includes Sam Richardson (Veep, The Tomorrow War and Werewolves Within), Ben Schwartz (Parks and Recreation, Space Force), Ilana Glazer (Broad City, Green Eggs and Ham) and Jamie Demetriou (Fleabag, Cruella).

In The Afterparty, a group of friends see each other again for the first time at the big 15-year reunion, followed by an afterparty at the house of Xavier (Dave Franco), a member of the graduating class turned millionaire-pop star. But when Xavier is found murdered, everyone is a suspect, especially Aniq (Richardson), who was witnessed by everyone to have a motive. But Aniq’s old friend Yasper (Schwartz) does his best to have his buddy’s back. Richardson and Schwartz make a perfect comic duo, and audiences are finding the pairing to be pure perfection.

“To actually get her backstory and find out why she is the way she is was satisfying and enlightening. I like those kinds of characters where it … reminds you to go gently with people more often.”

“We didn’t really know each other before this,” Richardson says, The two had seen each other at table reads and their careers have crossed paths before, mostly in voicing various cartoons, but The Afterparty was their first time screen together. “We’re so similar to each other and we have similar comedic backgrounds … We had a shorthand right off the bat. I felt immediately like I’ve known Ben for like 15 years.”

Schwartz echoes the sentiments of his co-star, finding that being believable as best friends since high school was almost effortless. “It was trusting Sam immediately,” Schwartz says, “knowing how funny he was, knowing that anything I said he could handle it and vice versa … we were spending so much time together, and it was during a pandemic that we became very close. It was a blast.”

What wasn’t so effortless for Schwartz was the big showpiece of episode three. In The Afterparty, Police Detective Danner (Tiffany Haddish), interrogates each suspect separately.  “I wanna hear your mind movie,” she says. As Danner sits with popcorn literally in hand, each tells her their version of what happened, which plays out in a specific genre. While Aniq’s story is a simple, charming romcom, Yasper’s version is a flashy musical. “It was so fun and so tiring.” Schwartz says. “I had never done choreography before … I was very nervous, and then Sam and I have an incredible song together, and then there are these other two songs that I do. I learned that singing and dancing at the same time is so hard.“ Schwartz would find himself bent over and out of breath between takes.

“We’re so similar to each other and we have similar comedic backgrounds … We had a shorthand right off the bat. I felt immediately like I’ve known Ben for like 15 years.”

For Ilana Glazer, playing the role of Chelsea—a once-popular girl who has gone into a self-destructive spiral—was a rewarding experience precisely because the character isn’t immediately easy to love.

“At first, I was like, ‘this poor mess,’” Glazer says. “To actually get her backstory and find out why she is the way she is was satisfying and enlightening. I like those kinds of characters where it … reminds you to go gently with people more often.”

If Glazer’s Chlesa seems pathetic and vulnerable, that goes doubly for Walt, the hapless and seemingly invisible character played by Jamie Demetriou. Walt is desperate for just a little bit of attention and acceptance, but not one single character has any memory of him at all. It was a feeling that Demetriou found easy to tap into, one that felt a bit familiar. “I can take ownership of that experience,” Demetriou says. The challenge the actor faced when playing Walt was in making sure that the humor of the character’s forgettable personality didn’t come at the expense of the his relatable fragility. “I think that the feeling of turning up to a party and not really knowing what to say or how to say it, or that people might not want you to be there, is kind of ubiquitous,” he says. “I think that we all experience that feeling from time to time, and I think that the balance of the joke to the human thing is putting my own experience into it.”

The first three episodes of The Afterparty are available on AppleTV+ now, with new episodes hitting every Tuesday throughout February. In order to keep the mystery secure, even television critics haven’t been able to view the final episode and the secret deepens further still. “We haven’t seen it either,” Schwarts says. “But we’re psyched.”

The Afterparty is a hilarious and addictively involving whodunnit that even gives Hulu’s Only Murders in The Building a solid run for its money. It’s another must see from the producers of Spider-Man: Into The Spider-Verse and The Mitchells vs. The Machines. Grab the  popcorn and get ready for some great mind movies.