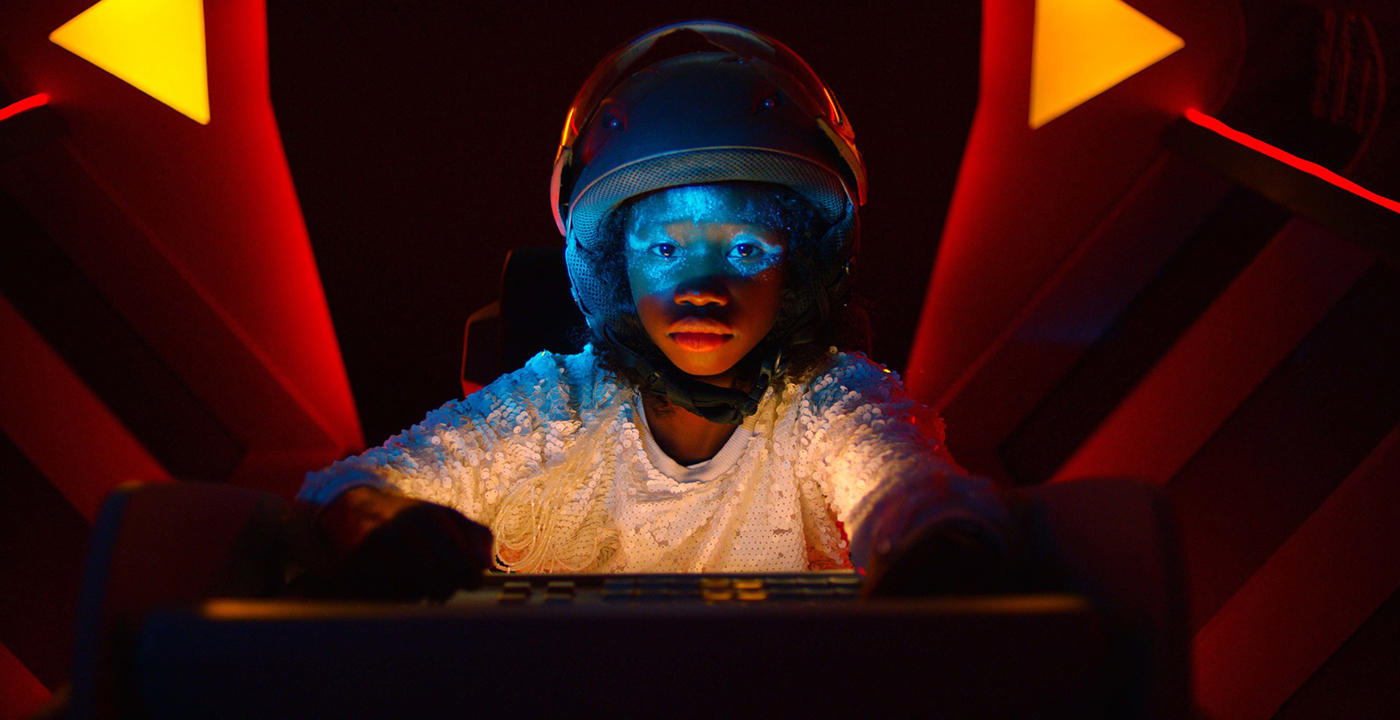 The film festival season began earlier this year with Sundance and has been going pretty steadily since then. Most festivals have at least featured an online component this year, and many have gone exclusively into the cyber realm. There’s something particularly meaningful about maximizing this cutting-edge format and bringing people together through technology for one of the newest film festivals to hit the scene this year, Afrofuturism: Blackness Revisualized. It’s a new film festival exploring the Afrofuturist genre through 10 films, including features as well as shorts, from the United States, Martinique, Trinidad and Tobago, Nigeria and more, streaming for free nationwide at allarts.org/afrofuturism.

For those who might be unfamiliar with the term, Afrofuturism is a cultural aesthetic, philosophy of science and of history that explores the developing intersection of African-diasporic culture with technology. Celia C. Peters, an accomplished filmmaker and curator of the festival, believes that Afrofuturism can take many different forms, and that what storytellers choose to do with it is wide open.

“Afrofuturism is really defined by a sort of a movement and an understanding of Black people, defining, shaping, determining their own futures,” Peters says, “exploring stories, narratives, characters—Black characters, Black stories, Black narratives—in the future, with a sense of liberation, because the future is undefined. So those futures can be whatever we choose for them to be, not constrained by the sort of limits and obstacles that are represented in the present day, by virtue of discrimination or prejudice or bigotry or any of those things … It’s very multi-faceted; it’s really a kaleidoscope of sensibilities and outlooks and perspectives on Black futures.”

“Afrofuturism is really defined by a sort of a movement and an understanding of Black people, defining, shaping, determining their own futures.”

According to Peters, Afrofuturism began in the United States through music—specifically through the jazz musician Sun Ra, a poet, bandleader and pioneer in experimental music, whose cosmic philosophy and theatrical performances garnered a strong following throughout his career.

“At a point when he was in college, he [Sun Ra] said that he was abducted by aliens,” Peters says. “And that kind of shifted his perspective as a musician and, I believe, as a person. So he became very much more the cosmic artist that he is known to be today.” Sun Ra, whose given name was Herman Blount, said that in 1937, he was transported to the planet Saturn, where he had a vision where he was told to leave school because there would be trouble on college campuses in the future, the world was about to enter into chaos, and that if he spoke to the world through music, people would listen.

In terms of Afrofuturism in film, examples range from Afronauts, a 2014 film from Ghanaian filmmaker Frances Bodomo about the Zambia Space Academy that works to beat the United States to the moon as the latter prepares its Apollo 11 launch, to Beyoncé’s 2020 musical, Black is King. But in terms of popular culture, the genre had its biggest mainstream breakthrough in 2018 with Ryan Coogler and Marvel Studios.

“Black Panther was such a watershed moment,” Peters says. “Because it’s so completely and thoroughly focused on these characters, their origins, their futures, their struggles … I think that the success of that film definitely has sort of shifted awareness, and I see news—pretty often, it seems—about new sorts of projects that are in development.”

“Black Panther was such a watershed moment.”

For further exploration of each film, the Afrofuturism: Blackness Revisualized film festival will feature a monthly series of companion essays on allarts.org by a range of editorial contributors, including artists, academics, authors and changemakers at the forefront of Afrofuturist thought. An “Afrofuturism 101” explainer video is available to view on the site as an introduction to the genre. The festival will also feature filmmaker conversations live-streamed as part of the ongoing ALL ARTS Talks series to promote dialogue and understanding around each of the film’s themes.

“We’re excited just to have a cool, fun conversation about these films, the stories and the themes and characters,” Peters says. “But also, the audience will have a chance to be in conversation with the guests as well.

The festival began on Friday, March 26 with a screening of Souls, a film by director Malakai. Souls is the story of Kai, a young girl forced to confront the realities of her grandmother’s declining health as a result of Alzheimer’s.