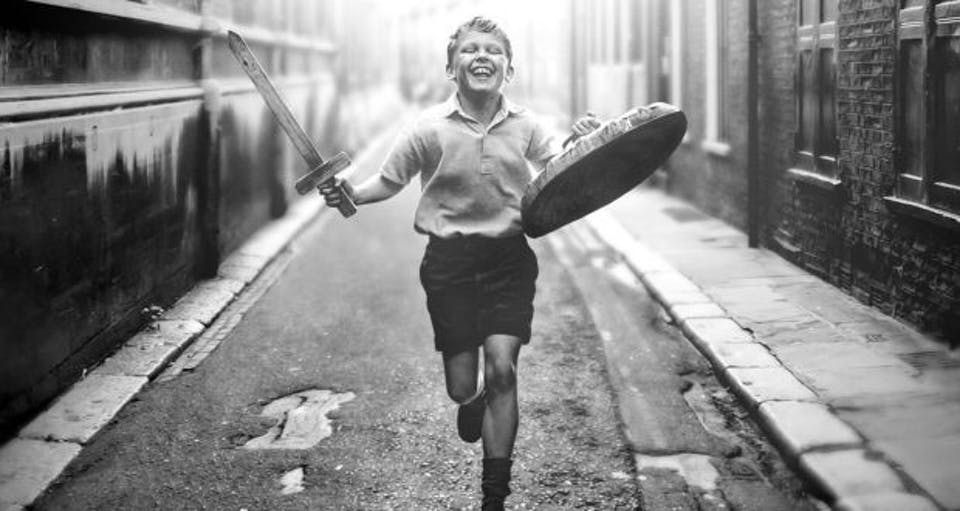 “The object of art is to give life a shape.”
–William Shakespeare

Anyone who has ever made a movie will tell you that a film is molded into its true form in the editing room, a place where Úna Ní Dhonghaíle shines brightest. The BAFTA award–winning editor of The Crown and Three Girls has had a remarkable career, but it was in cutting Belfast that she got a chance to help one of her idols shape his life into art.

“We just got on very, very well,” Dhonghaíle says of her experience working with Sir Kenneth Branagh, the world-renowned Shakespearean stage and screen actor and director who first made his mark on the world of cinema with the 1989 film version of Henry V. Since then, Branagh’s decade-spanning career has told stories from the Bard of Avon, Agatha Christie, Tom Clancy, Marvel Comics and finally with Belfast, his own life. “He’s a lovely, lovely person as well as being such a master storyteller and a poet,” Dhonghaíle says.

“Particularly when you’re making a personal film, it’s really important to work with people who will not be afraid to make suggestions that might make the film better.”

Dhonghaíle first met Branagh while editing the BBC series Wallander in the mid 2000s, though she’s been an admirer of his work for much longer. Branagh’s powerful presence and sensitivity as an actor, combined with his skillful staging, technical prowess and the depth of his storytelling made him a personal favorite, and Dhonghaíle loved to study his films methodically, even taking notes “I used to draw the composition, the mise en scène, so that when I was going to direct I’d have an idea how the composition worked and how shots came together.” Dhonghaíle jokingly suggests that it’s hard for her to talk about the influence Branagh’s work had on her and how big a deal it was to work with him without sounding like a stalker.

Through her work on Wallander, Dhonghaíle landed a job editing Death on the Nile, Branagh’s followup to Murder on the Orient Express. When the film was postponed, Branagh moved on to All is True, a story about the final years in the life of Shakespeare, which Dhonghaíle edited before returning to Death on the Nile. But when that film’s release was delayed due to Covid-19, Dhonghaíle thought she’d be out of work indefinitely—until she got a call from Branagh asking her to edit Belfast, which is based on Branagh’s childhood in the 1960’s growing up in Northern Ireland.  Dhonghaíle edited all three of these films for Branagh within a two year period.

“I think he surrounded himself with people who he knew would have his best interest at heart.”

“He gives so much creative space, because he is confident in who he is, and he is confident in his vision,” Dhonghaíle says of working with Branagh. “Particularly when you’re making a personal film, it’s really important to work with people who will not be afraid to make suggestions that might make the film better … I think he surrounded himself with people who he knew would have his best interest at heart.” Because of the timing of shooting during the Covid-19 pandemic, Dhonghaíle and Branagh were not in the editing room together, but instead did everything by remote. Dhonghaíle gave Branagh three versions of each sequence. “And then Ken was brilliant, he could watch version one, two and three, and then because he knew his vision, he could follow the ideas and ‘Yeah or really like that’ or ‘No, let’s try this instead.’, and if something rang true for him, then we could go with it.”

During the past two years, Dhonghaíle’s work has also included the Keira Knightley vehicle Misbehaviour, a true story of members of the women’s liberation movement who disrupted the 1970 Miss World Competition, as well as Together, a Covid-19 character drama starring James MacAvoy and Sharon Horgan as a couple trying to make it through lockdown together.

As Belfast approaches awards season as a major contender and Death on the Nile is set to finally arrive on screens in February 2022, Úna Ní Dhonghaíle looks forward to her next project—whether it be big or small, and whether it be with Branagh or another filmmaker—and the opportunity to help it take shape.