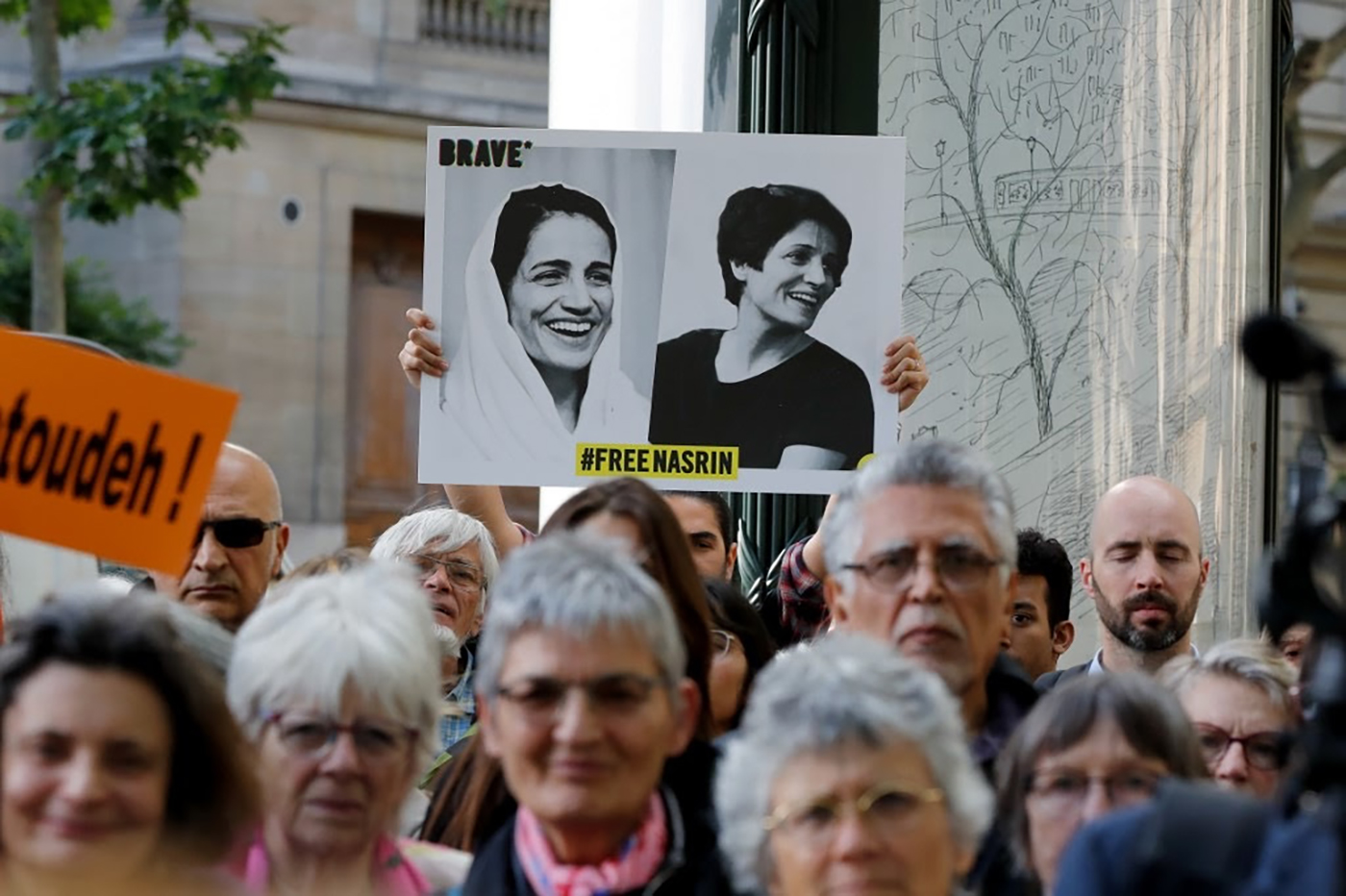 This summer’s most riveting superhero movie has a female protagonist, and I’m not talking about Black Widow. Nasrin, a powerful new documentary from the powerhouse husband-and-wife team of writer-director Jeff Kaufman and producer Marcia Ross (Every Act of Life, The State of Marriage), premiered on Hulu on June 15. It tells the gripping story of Nasrin Sotoudeh, one of the world’s most committed and courageous human rights lawyers and a key figure in Iran’s women’s rights movement.

“We first became aware of Nasrin in a couple of ways,” Ross says. “The first one was that Jeff was making a film in 2011, a short film called Education Under Fire, about the persecution of the Baháʼí faith in Iran.” Ross explains that those who practice the Bahái faith are treated as second-class citizens or worse by the government of Iran, and are not allowed to pursue an education. Sotoudeh, a Muslim woman and attorney who defends her Baháʼí friends and neighbors, really struck both her and Kaufman as the kind of admirable figure whose story they wanted to tell. In addition to Sotoudeh herself, Kaufman and Ross’ vision had an even broader scope.

“We always wanted the film to open up a portrait of Iran that you don’t normally see,” Kaufman says, adding that one of the messages of the film is that you shouldn’t judge a country by its leadership, but by its people. “We also saw this as sort of pushback against this long demonization of Iran in the United States, and demonization of Islam. We’re seeing this politicization of othering and stereotyping Islam … and here’s Nasrin and her husband, Reza [Khandan], who flip all those stereotypes on their head.”

Kaufman mentions that Ross often compares Khandan to Marty Ginsburg, the late husband of Supreme Court Justice Ruth Bader Ginsburg. “Reza is a man who is brilliant and strong, and has the same ambition as his wife,” Kaufman says, “but is very happy to serve his wife’s more public life and work, cooking for his kids and taking care of his family, as well as being a professional and an activist himself.” Kaufman notes that Sotoudeh has worked almost nonstop defending not just women, but journalists, artists and filmmakers who are being prosecuted under spurious and unjust charges, and—more often than not—she has done so for free. He says, “I think she sets a perfect example for the values we need in this country and universally.”

“We always wanted the film to open up a portrait of Iran that you don’t normally see.”

The focus of the film shifted during production, when Sotoudeh and her family’s lives were changed forever. June 13 marked the third anniversary of Nasrin’s incarceration in the notorious Evin Prison in Iran, where she was sent after being arrested in 2018 for representing women who protested Iran’s law requiring that all women wear the hijab head covering in public, thereby “inciting immorality and prostitution.” For these charges, she was sentenced to 38 years behind bars, plus 148 lashes.

An important part of how Kaufman and Ross were able to make and complete the film was through the help of videographers in Iran who put themselves at great risk by shooting it. They’ve remained anonymous for fear of retaliation. Kaufman said that these videographers were willing to do so because they believed in Sotoudeh, in democracy and in the cause of women’s rights.

One of the charges named against Sotoudeh is spreading “false news and propaganda,” an accusation that may sound chillingly familiar to many Americans, and the parallel was not lost on the filmmakers. “We were conscious of it for every second of making this film,” Kaufman says, as disturbing similarities between the regime in Iran and the attack on American democracy at home were very much on their minds. “We were making this film in an era when we were seeing a lot of rights radically pushed back. That whole thing about ‘fake news’ is absolutely terrifying.”

“An important part of how Kaufman and Ross were able to make and complete the film was through the help of videographers in Iran who put themselves at great risk by shooting it.”

Kaufman notes that as well as hoping to help keep the pressure going on the Iranian government to release Sotoudeh from prison, there are other goals behind the documentary. First and foremost was to make a good film that stuck with people and took them on an emotional journey. But as Kaufman and Ross correspond with her in prison, Sotoudeh has been talking recently about the influence of her heroes on her life, from Mahatma Gandhi and Nelson Mandela to Czech dissident Václav Havel, and why she has chosen this path.

“If someone like that gets into your gut, it can change your life and end up changing other people’s lives,” Kaufman says. “So we hope that the experience of getting to know Nasrin Sotoudeh will get into people’s hearts, make them care about others … make them realize that human rights is a central, vital governing principal for the world, and that they can get involved as well and make a difference.”

Nasrin is currently streaming on Hulu, and information on how to get involved in the campaign for Sotoudeh’s release can be found on amnesty.org and nasrinfilm.com.