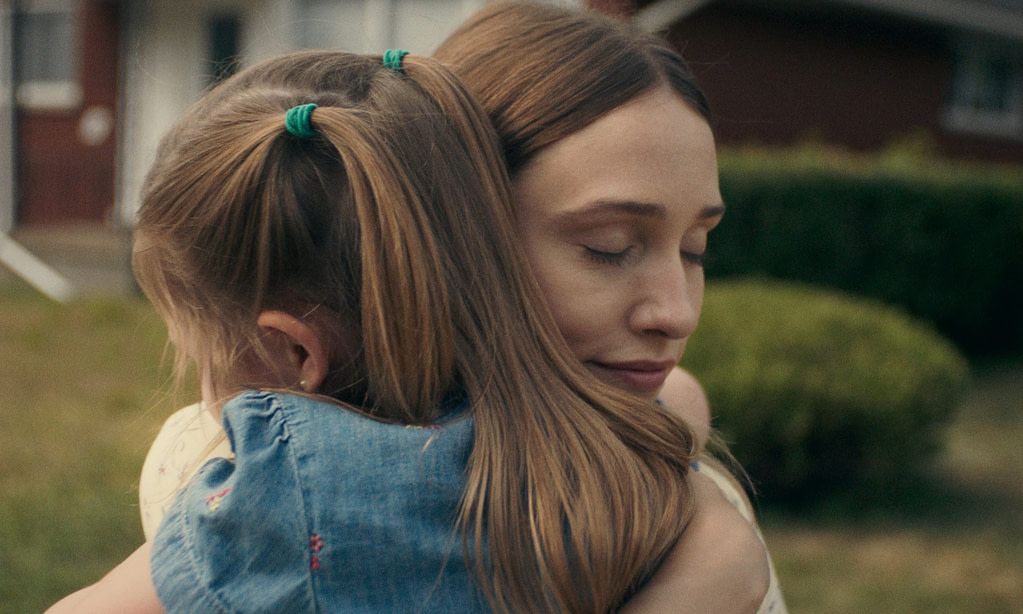 The subject of postpartum depression is a difficult one that isn’t often explored in the movies. They are the occasional films such as the 2016 documentary When the Bough Breaks, or Jason Reitman’s “Fight Club for grownups” dramedy, Tully, but these are the exception rather than the rule, and there is a lot left to be said on the subject and a wealth of perspectives and stories to tell. Writer-director Jesse Noah Klein (We’re Still Together) tackles this weighty topic in a truly unique way in his new film, Like a House on Fire, which stars Sarah Sutherland (Veep, The Kid Detective) as Dara, a woman who returns home to reconnect with her husband and her young daughter, both of whom she left abruptly left two years earlier following a breakdown, first just disappearing and then checking herself into a hospital. When she arrives home, she discovers that a woman who is seven months pregnant has taken her place and that her daughter no longer recognizes her. But the biggest obstacle she faces is her estranged husband, Dan, played by Jared Abrahamson, who is not at all certain that he wants Dara back in his life, or their daughter’s life.

“The character was the thing that I started with,” Klein says. “I really had a strong sense of Dara, and the story evolved from her, rather than vice versa.” Klein was first and foremost looking to tell an intimate, character-based story, and he felt passionately about this character, who’s trying to reconnect with the people in her life while her past lingers behind and puts up barriers that can be difficult, even painful to break through. But since this film is anchored so heavily in its protagonist, finding the right Dara was crucial.

“The character was the thing that I started with.”

“We were casting the film, and Sara seemed like a really great fit for it in a number of ways,” Klein says. “You know, she’d been on a really wonderful comedy for a number of years, and I kind of thought and maybe hoped that this would be something that she’d be interested in as a departure, as a new experience, coming off of an HBO comedy, and the more that we talked and the more that we collaborated, she was really wonderful to work with, and she gave everything that she had to it.”

Sutherland, the daughter of superstar Keifer Sutherland (The Lost Boys, 24, Designated Survivor) and granddaughter of the legendary Donald Sutherland (M*A*S*H, Ordinary People, The Hunger Games Trilogy) continues a Hollywood acting dynasty, though Klein is careful to point out that it’s not something that she carries with her on set. “We talked about it once,” Klein says. “I have great respect for those actors, but I think that’s something that Sarah is quite pointed about and determined about, and she has a great relationship with her family, but I think she really just wants to kind of carve her own path in the industry, and we really just focused on our work.”

“You know, she’d been on a really wonderful comedy for a number of years, and I kind of thought and maybe hoped that this would be something that she’d be interested in as a departure, as a new experience.”

When it comes to the subject matter, it was important to everyone to approach the subject with sensitivity and authenticity. “On the surface level, there was literal research that was done,” Klein says. “I met with medical professionals and doctors who’ve dealt with this and have spoken to a lot of different people who have direct experience, but I would say that what it ultimately comes down to was the character, was Dara, and what she was going through and the ways in which she kind of messes up but really always has the best of intentions.”

As a story about mental health, Like A House on Fire is both revolving and grounded, dealing with real issues that real people face when trying to return to normal life after treatment and hospitalization. As someone who was in a hospital for suicidal depression at this time five years ago, the film connected with me on a very personal level. Like a House on Fire doesn’t try to provide absolute answers to every question that it raises, but what sets it apart from other recent films that sensationalize mental-health issues is not just honesty, but empathy, understanding and hope. Dara is a fascinating protagonist because she’s trying to regain the trust of her loved ones while still battling the issues of whether she believes in herself. It’s a wonderful, nonjudgemental film that explores issues of responsibility to family and self on both sides of the relationship, and I found it impossible not to feel genuine love for Dara as well as her family.

Klein gives a lot of credit where credit is due when it comes to his star. “If we’re talking about authenticity, it kind of starts and ends with Sara,” Klein says. “And I was really kind of awed, at times, by her performance and just tried to help her as best I could.”

“If we’re talking about authenticity, it kind of starts and ends with Sara.”

Like a House on Fire was a collaborative process for Klein and his entire cast, one that he found to be rewarding, not just with Sutherland, but with other actors, from Abrahamson (American Animals, Fear the Walking Dead) to Hollywood veteran Sheila McCarthy (Die Hard 2, The Day After Tomorrow, The Umbrella Academy), who appears in a small but pivotal role.

“I think Jared was really perfect for the role, and I was thrilled with the work that he did,” Klein says. “I don’t know—there’s so many different roles [that] I don’t know if I had everyone cast in my mind as I was writing it, but as we got closer, Sheila was really the person I was very passionate about.”

Klein explains that the rehearsal process for the film took place mostly in the form of intense discussion with the actors meeting, talking through the script and building the characters together. Although, he states that for Margaux Vaillancourt, the young actress who plays Dara’s daughter, Isabel, he worked with her alongside an acting coach. The two exercised more traditional forms of rehearsing scenes in order to get the strongest performance possible.

Klein is looking toward the future now, developing his next project, which he says is “a little more atmospheric.” He admits, however, that with conditions as they are due to the pandemic, when exactly the new film will be shooting is still unclear. One thing that is clear, though, is that Klein would love the chance to work with Sutherland again. “I got a Dara better than I ever could have hoped,” he says. “I’m really happy for her performance, and I hope that it’s recognized because I think it’s a remarkable one.”

Like A House on Fire is available now on streaming platforms including Amazon, iTunes and Vudu.