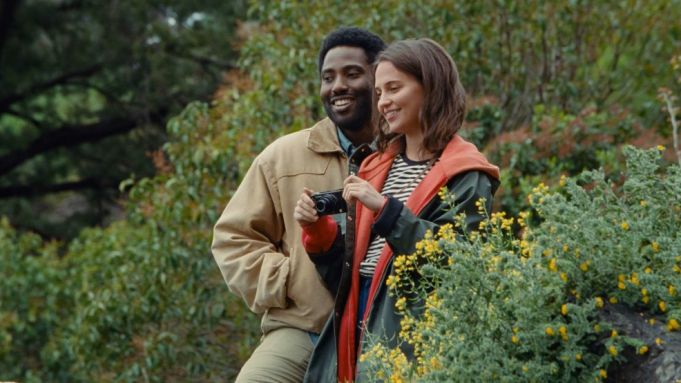 The title of the film is Beckett because that’s the main character’s name, and Beckett is the character’s name because it sounds like it could be a title. That’s the kind of creativity we’re dealing with here.

Beckett (John David Washington, Tenet, Malcolm & Marie) is an American tourist vacationing in Greece with his girlfriend, April (Alicia Vikander, The Green Knight, The Glorias, Tomb Raider). After a devastating accident leaves April substantially less alive than she was as the beginning of the film, Beckett—who is so dull a character as to not even warrant a last name—is forced to run for his life because of reasons. He’s desperate to get across the country to the American embassy to clear his name.

Meanwhile, tensions escalate as the authorities close in, including Boyd Holbrook (Logan, the upcoming Indiana Jones 5), who has been directed to do everything short of wearing an “I Am Quite The Bastard” T-shirt to let us know he is a villain. As political unrest mounts, Beckett falls even deeper into a dangerous web of whatever it is the movie is supposed to be about.

As you might have guessed, I didn’t love this movie. Director Ferdinando Cito Filomarino, who served as second unit director on Call Me By Your Name, where he learned the valuable lesson to point the camera at the actors and other things that are going on, stated in the press materials that he had seen a lot on manhunt movies, and “wanted to see what would would happen if the archetypal hero was just an ordinary guy.” In this case, this translates to “What if Richard Kimble from The Fugitive were younger and literally had the physique of an ex-NFL player, but was just as dumb as the characters in other movies?”

Washington, who got off to a great start with BlackKkKlansman, got a raw deal when his big-break movie was thrown away because its director, Christopher Nolan, is in many ways brilliant but does not reside on this specific planet. That film was then followed up by Malcom & Marie, a pretentious, stupid and almost unwatchable mess, which is another way of saying that Variety loved it. Washington does a capable job here, convincingly portraying that his character is happier when in bed with Vikander than being brutalized by a bearded police officer.

But he’s given so little to work with that I frankly only stuck with the movie all the way till the end to see if Washington would do so as well. Vikander is enchanting in what little of the movie she’s in, and Vicky Krieps (Phantom Thread) gets a lot of mileage out of the fact that, compared to her last movie, Old, this is Citizen Kane. Holbrook, meanwhile, is just killing time and picking up a paycheck.

In all honesty, Beckett is short and fairly watchable, but it’s just so puzzlingly unexceptional and not at all what you are expecting for a film produced by Luca Guagadino (Call Me By Your Name, Suspiria). There’s not a single frame in the movie that we haven’t seen done better in a dozen other films, many of which were still pretty mediocre in their own right. It doesn’t just pale in comparison to the Harrison Ford version of The Fugitive, but it actually left me feeling like my time would be better spent watching the Quibi version, which stars Holbrook (small world) and is currently playing for free on the Roku Channel. –Patrick Gibbs