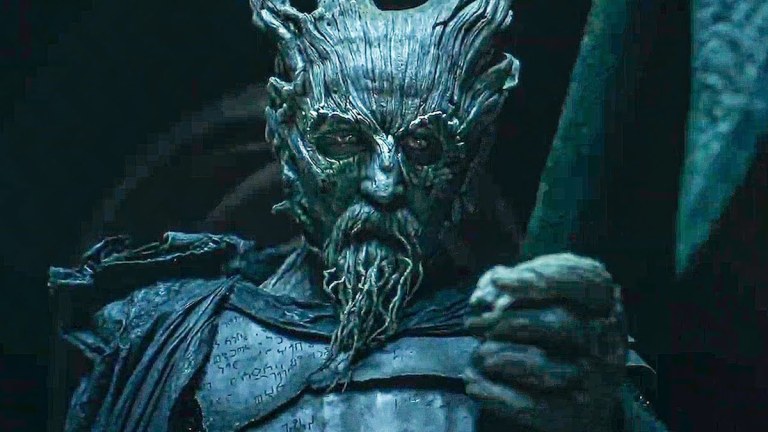 When all of the major releases for last year got delayed, most film fans had a couple of specific titles that felt like they were going to be particularly tough to wait for. A lot of people I know skewing heavily toward Black Widow, but David Lowery’s The Green Knight was always toward the top of my own list.

An epic fantasy adventure, The Green Knight tells the story of Gawain (Dev Patel, Slumdog Millionaire, Lion, The Personal History of David Copperfield), King Arthur’s headstrong nephew. King Arthur’s court is gathered to celebrate Christmas, and the King asks Gawain to share a story of his deeds, to which Gawain replies “I have none.” It is then that a gigantic green figure rides into the hall.

He wears no armor, instead choosing to cosplay as Groot from Guardians of the Galaxy, and he carries an axe. The Green Knight, as he is known, insists he has come for a friendly Christmas game: Someone must strike him once with his axe on the condition that the Green Knight may return the same blow, in exact spot, one year hence on Christmas, and his axe will belong to whoever accepts this challenge. When none of Arthur’s knights steps forward, Gawain volunteers and beheads the giant in swing of the axe.

The Green Knight then reaches out, picks up his severed head and remounts, reminding Gawain that the two must meet again in a year at the Green Chapel, singing “Last Christmas, I gave you my ax. You chopped off my head, but you’ll wind up dead.” (I might have made up that last part.) Gawain must contend with ghosts, giants, thieves and schemers in what becomes a deeper journey to define his character and prove his worth in the eyes of his family and the kingdom.

Lowery is one of Hollywood’s most interesting writer-directors, with a filmography ranging from Ain’t Them Bodies Saints to Pete’s Dragon, and he has crafted a bewitching take on the epic poem, drawing heavily on the source material while adding his own spin. The Green Knight is part fable, part fever dream, playing out in episodic segments that are full of rich subtext, but leaving interpretations up to the viewer, like a medieval Blade Runner. Lowery plays with the romance of the mythology while allowing us to ponder whether there is really anything to be romanticized.

But Lowery doesn’t spoon-feed anything through overwrought speeches, instead trusting himself and his audience. Patel gives a career-best performance, and Gawain is a wonderfully layered and flawed character, brash and immature, and when we meet him, he is a content slacker who gets pulled into desire—first for recognition, then for honor and meaning. Patel is an actor who can communicate volume with just his eyes, and Gawain feels so much more like a real person than we usually get in such films that I was riveted by it.

Oscar winner Alicia Vikander (The Danish Girl) appears in dual roles, first as Esel, the peasant who is Gawain’s casual lover, and then as the lady of a castle where Gawain finds himself staying on his journey. Vikander is equally gifted at playing vulnerable and mysterious, and she’s a captivating presence, as is Joel Edgerton (Warrior, Black Mass) as the lord of the castle. Edgerton himself played the role of Gawain in Antoine Fuqua’s wildly revisionist King Arthur, and while that will be lost on most viewers who have understandably forgotten that film, it adds a wonderful extra layer of irony to the character, and Ralph Ineson (Game of Thrones, Chernobyl) is unforgettable in the title role.

Cinematographer Andrew Droz-Palermo (A Teacher) gives The Green Knight a look that is naturalistic while cloaked in a subtle, ethereal haze. As usual for a Lowery film, Daniel Hart’s musical score is sublime. It all comes back to Lowery’s vision: a flashier, more Hollywood approach could have really ruined this one, and there were several moments where I couldn’t help but contrast Lowery’s soft, lyrical approach to other period films like 300 and feel grateful that this film was made by such thoughtful artist exercising judicious restraint.

The Green Knight is a triumphant film, and easily one of the most artistically and intellectually satisfying of the summer. If you’re looking for a more cerebral adventure tale, then this is definitely the movie for you. And starting this December, it will be joining Die Hard and Gremlins on my alternative yuletide movie list. –Patrick Gibbs