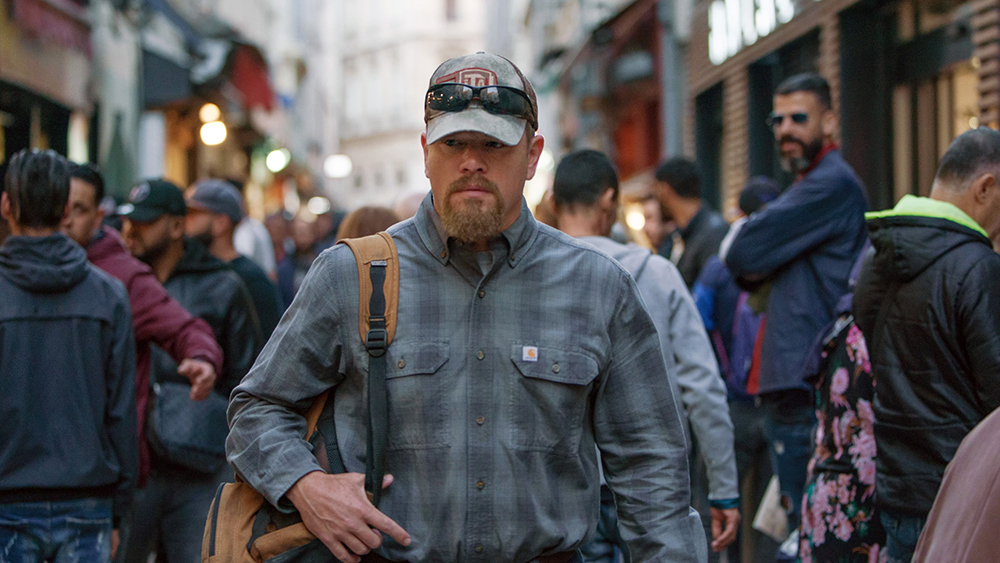 Moviegoing in the month of July has been heavily skewed toward I.P. and CGI, which is hardly abnormal. But it’s usually at this point in the summer that a craving for something a little more substantive and grown-up kicks in. Stillwater, the new film from director Tom McCarthy (The Station Agent, Spotlight) couldn’t be coming at a better time.

Stillwater stars Matt Damon as Bill Baker, an unemployed roughneck who travels from the town of Stillwater, Oklahoma, to Marseille, France, to visit his estranged daughter Allison (Abigail Breslin, Little Miss Sunshine, Zombieland). Imprisoned for a murder she claims she did not commit, Allison acts on a new tip that could exonerate her and presses Bill to engage her legal team. But Bill, eager to prove his worth and regain his daughter’s trust, takes matters into his own hands. He is quickly stymied by language barriers, cultural differences and a complicated legal system until he meets French actress Virginie (Camille Cottin, Allied, Killing Eve), mother to 8-year-old Maya (Lilou Siauvaud). Together, these unlikely allies embark on a journey of discovery, truth, love and liberation.

McCarthy has cowritten the screenplay, along with Marcus Hinchey (All Good Things) and Thomas Bidigain (The Sisters Brothers). It’s a slow-burn thriller that presents much of the exposition in a way that requires some patience and attention, but is refreshingly realistic and doesn’t talk down to the audience. The setting provides for a fresh atmosphere and a feel that is unlike any other major release this summer, with the fish-out-of-water, conservative-Oklahoma-oil-driller-in-Marseille element working nicely without being constantly overmilked for laughs.

Damon delivers another riveting performance, and the character of Bill is a nice departure for the superstar. Damon has gained a significant amount of weight for the role, giving Bill a beefy dad bod. When the character gets himself into a fight with a group of younger men on the streets of Marseille at night, it’s jarring when you realize that no, Jason Bourne isn’t coming out to play, and Bill is in serious trouble.

A lot is being made of Damon immersing himself in the culture of MAGA country to prepare for the role, and the actor’s natural empathy and desire to look at everyone as multidimensional makes it almost sound like Stillwater is a right-leaning film. But it’s really a fair and balanced view of how the rest of the world views America right now, through the perspective of a lead character who has been brought up to believe that the rest of the world doesn’t matter. It makes for an interesting study of viewpoints.

Breslin is impressive as Allie, the imprisoned daughter who wanted to get away from her upbringing in Oklahoma and live a drastically different life where she could embrace her lesbianism and create an identity of her own. But Stillwater may be at its most captivating when it is focusing on the relationship that blossoms between Bill and Maya, with Bill getting a second chance to be a father figure while the young Siauvaud could not be better playing opposite Damon.

All that said, I did leave feeling like I’d invested a lot of time in a lead character whom I didn’t ever truly learn to like much, apart from the fact that I like the actor who plays him. I had trouble believing the attraction that the idealistic and intellectual Virginie has to this guy. I also found it odd that Damon was so game to pudge up for the role, but his beard was given a rather obvious dye job to hide any gray. This is the father of an adult daughter—why try to make him look younger?

Stillwater runs a bit too long at 140 minutes, and does drag in places, but it’s an interesting story that didn’t go where I expected it to go by focusing on characters over intrigue. The cinematography by Masanobu Takayanagi (Hostiles, The Grey) is quite eye-catching, capturing the beauty of the setting without relying on tricks to romanticize it. The simple but delicate musical score by Mychael Danna (Life of Pi, Onward) was a real highlight for me. It’s pretty unlikely that Stillwater will make my list of the best films of 2021, but it is a smart and engaging effort that makes for worthy alternative summer viewing. –Patrick Gibbs