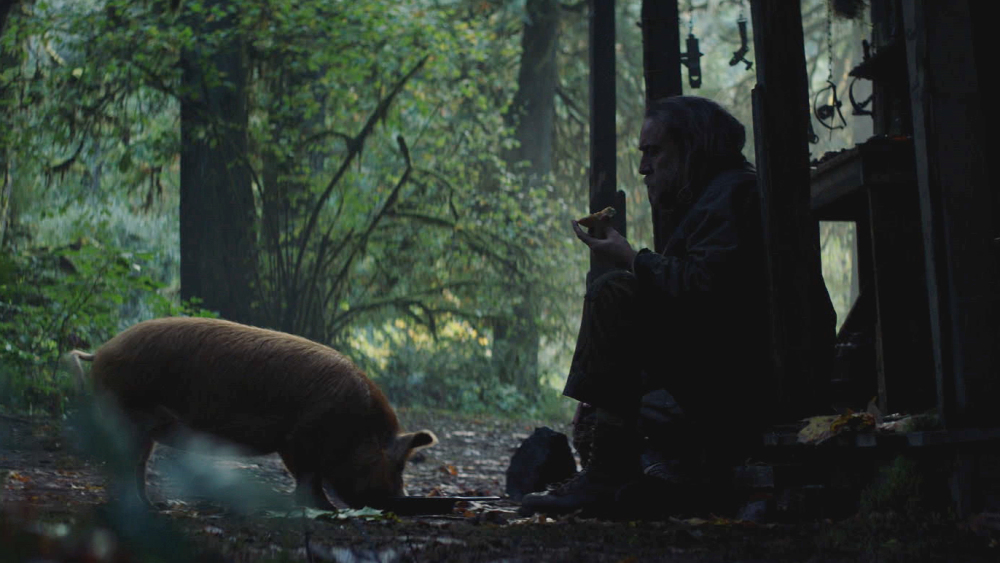 I have a shocking confession to make. Half the reason I’m not only a film critic but one with a high output is that it gives me an excuse to see every new Nicolas Cage, use the excuse that it’s my job, and I don’t have to waste any money on them. There’s a certain entertainment value in the schlock that Cage specializes in these days, and Pig, his latest film—which, shockingly enough, is getting a theatrical release, promised to be one of craziest, scenery-chewing movies yet.

The set up for Pig is that Cage plays a reclusive truffle hunter named Rob, who lives alone in the Oregon wilderness, his sole companion a truffle pig who is always at his side. The only actual person he comes in contact with is Amir (Alex Wolff, Jumanji: Welcome to the Jungle, My Friend Dahmer), the buyer who sells Rob’s truffles to sell to fancy restaurants. But when Rob is attacked and his beloved pig is kidnapped, his peaceful existence is shattered. He must venture back into his old stomping grounds, accompanied by Amir revisiting his past self in order to find out who took the animal.

The internet is reacting to Pig in a manner similar to the way it did to Snakes on a Plane, because everyone is expecting John Wick with Nicolas Cage and a prize porker. Admittedly, this does sound like awesome guilty-pleasure stupidity if done right. But that’s not what we get at all, and Pig may be a rare case where audiences feel disappointed and want their money back because they didn’t pay to see a good movie; they paid to see a fun one. But Robin isn’t who you expect him to be, and while Pig is not a fun movie … it’s actually a very good one. Maybe even a great one.

Writer-Director Michael Sarnoski takes a completely different approach than the ones audiences are expecting from the trailer, giving us not a revenge thriller but a quirky but soulful introspective character piece that is a philosophical exploration of loneliness, guilt, the need for validation, perception versus reality, the hollow meaninglessness that comes from seeking adulation, as well as the fleeting nature of that kind of fame. Ultimately, Pig is a story about love, sorrow and regret.

The Nicolas Cage of films such as Willy’s Wonderland, Prisoners of the Ghostland and Primal didn’t show up to work on Pig. In fact, this isn’t even the $20 million paycheck Nic Cage of The Rock or National Treasure. Somehow, Sarnoski has managed to find the Cage of Matchstick Men, Bringing Out the Dead, Adaptation and Leaving Las Vegas. There is a subdued, haunting and pervasive sadness to Cage’s spellbinding performance that is a marvelous thing to behold, and instead of wild, frenzied and psychotic eyes, we get misty mirrors to his soul that communicate so much more than words. There’s a deeply felt humanity to Rob that isn’t just surprising vis-à-vis the walking joke that we’ve gotten all to used to watching.

It’s all too rare in movies these days in general, and the only other lead performance I’ve seen this year that has that can compete with it for sheer power is Clayne Crawford’s acclaimed portrayal of a desperate man trying to keep his family together in The Killing of Two Lovers. That’s not to say that there isn’t a certain eccentricity to Rob, the lonely hermit who has formed a heartfelt bond with his pig, but it’s borne of the character instead of any expectations of what we think we want to see from the star. Wolff is great in his own right, and Adam Arkin (Chicago Hope, Sons of Anarchy) is outstanding as what turns out to be a surprisingly complex character.

The moody and, at times, picturesque cinematography by Patrick Scola (Monsters and Men, Southside With You) is simply gorgeous. Sarnoski favors long takes that allow the performances to stay organic and rooted in the moment. The melancholy of the musical score by Alexis Grapsas (Big Shot) and Philip Klein (Wish Dragon) is elegant in its simplicity.

Pig comes as such a surprise that I had to see it twice before submitting my review because I had to feel confident that I wasn’t just having a knee-jerk reaction to see Cage care like this again. I’m still processing it, and I find it difficult to sum up too simply. There is still an element of kookiness to it, including a bizarre visit to an underground fighting circuit with a specialized and absurdist twist. There’s a definite touch of Joel and Ethan Coen influence at work here, but it’s not overt, and I don’t want to plant any expectations in people’s minds, because it’s ultimately not a Coen film; it’s a Sarnoski film. If Pig is any indicator, that’s going to mean something someday soon.

While the two films are different in tone, I couldn’t help but think of James Mangold’s Cop Land, which not only reinvigorated Sylvester Stallone as an actor but used his persona in a way that added extra dimensions to the film. Pig simply wouldn’t work with anyone else in the lead role besides Cage because he understands the character of Rob in a way no one else could. The film understands and respects Cage, the screen legend, in a way that is wholly unique and visionary.

I haven’t been as completely blindsided by a movie the way I was by this one in a long time, and for there’s no denying that Pig is a spellbinding work of art. Whether these sentiments are going to be echoed by many others or whether I’m going to be laughed at for voicing them, I don’t know. Frankly, I guess when it comes down to it, I don’t care.

For me, Pig is the most disarming surprise of 2021 thus far, and even if Cage turns right back around and dyes his beard shoe-polish black and mugs his way through another campy, kitschy fan-service B movie more than once this year alone, it won’t erase the impression he makes here, much like the shot of artistic adrenaline that was Al Pacino’s performance in The Irishman. No matter how far the mighty may fall, if the greatness was ever truly there, it never goes away. Cage is still one of the most skilled and interesting actors of the past 40 years, even if he chooses never to show it again. –Patrick Gibbs