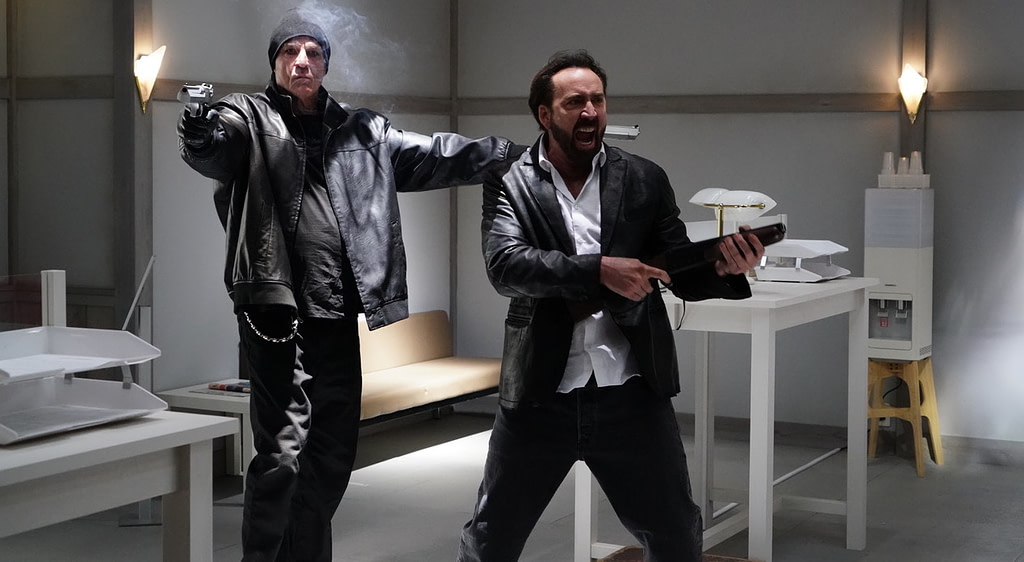 Whether you love him or hate him, there is only one Nicolas Cage. Sure, you could try to create your own in a lab by combining the DNA of Charlton Heston, Al Pacino, James Dean, Bruce Campbell, Elvis Presley and  Bela Lugosi with liberal amounts of Flamin Hot Cheetos and Mountain Dew, but I wouldn’t advise it. In Prisoners of the Ghostland, Cage has arguably been pared with a director who is as utterly bonkers as he is, in the form of eccentric Japanese filmmaker Sion Sono, (Why Don’t’ You Play in Hell?, Love Exposure).

Prisoners of the Ghostland begins in the treacherous frontier city of Samurai Town, where a ruthless bank robber (Cage) is sprung from jail by wealthy warlord The Governor (Bill Moseley, House of 1000 Corpses, Repo! The Genetic Opera), whose adopted granddaughter Bernice (Sofia Boutella, Atomic Blonde, Star Trek Beyond) has gone missing. The Governor offers the prisoner his freedom in exchange for retrieving the runaway. Strapped into a leather suit that will self-destruct within five days and has charges on the arms set to go off if they detect him feeling an urge to strike a woman in anger (“Your trousahs ah also equipped with explosives, one in each testi-cule,” the diabolical Governor wryly explains in a drawl that’s somewhere between Foghorn Leghorn and Truman Capote),  the bandit sets off on a journey to find the young woman—and his own path to redemption.

Prisoners of the Ghostland provides a fever dream that is part western, part samurai flick, part post-apocalyptic thriller and all batshit insane, and is billed as a “sly spoof of the hero’s journey,” much in the same way that the Trump administration was a “sly spoof” of America.

There’s something undeniably gleeful about watching Cage quote “Alas, poor Yorick” to a motorcycle helmet, and I can’t decide if I enjoyed this film almost as much as I despised it (or the other way around). Cage is at least very aware that he’s doing a tongue-in-cheek film that celebrates his wilder tendencies as an actor, and he gets a lot of mileage out of such immortal dialogue as the following:

“They helped me because … I… am … RADIOACTIVE!”

And, of course, the show-stopping soliloquy:

“If you’d have told me three days ago that I’d be standing here with one arm, and one (insert patented Nic Cage twitch) TESTICAAWL!!! trying to reason with you bitches, I would have said there was no way!”

Cage’s man with no name faces off against gunslingers, lethal swordsmen, vengeful ghosts and a deranged desert cult, but the action doesn’t really get good until Boutella finally gets a sword in her hands. But as outrageous as Cage is, he’s committed and in the moment, and there were times when I saw splashes of the visceral, exciting actor that can sometimes resurface, and Boutella is always an intense and interesting presence.

Prisoners of the Ghostland is a nonsensical mess that had me feeling like one of those characters from a certain era of Bugs Bunny cartoons who looks as the camera and declares “I was a human being once” before cackling maniacally and running off to who knows where to die alone. But it does have a strange beauty to that I can’t put into words, having never tried marijuana. It’s easily the strangest film to emerge from Sundance this year, and yet there’s at least as much pandering to it as there is artistry as it sets out to become a psychedelic cult classic among the midnight movie crowd. It will likely succeed, but at what cost? I don’t really care as long as I don’t have to watch it again, but I love the fact that I was among the first to see it. –Patrick Gibbs