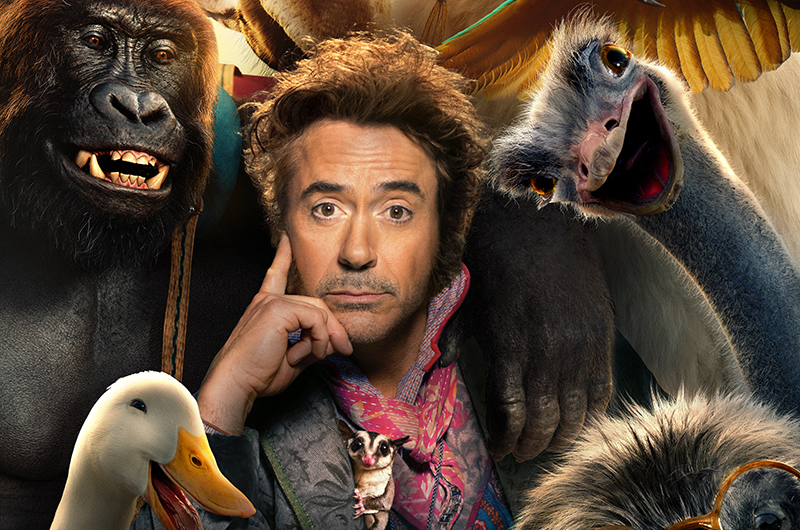 There’s a good reason to go into the new big screen version of Hugh Lofting’s beloved children’s book, The Voyages of Doctor Dolittle, with some skepticism. While director Stephen Gahan is an Oscar-winning screenwriter (Traffic), his films tend to be complex, morose geopolitical thrillers and melodramas that hardly scream “this guy simply has to do a children’s movie.” There’s also the fact that after test screenings, the studio realized the film was in trouble and brought in a ghost director and new writers in order to do massive reshoots to make it funnier and more exciting. Top it all off with the dreaded January release date, and you have all the makings of a total misfire. Except for one totally unforeseen surprise: Dolittle is actually pretty good.

John Dolittle (Robert Downey Jr.), a famously eccentric doctor and veterinarian in Victorian England, possesses the rare gift of being able to converse with animals. But when his wife dies, he becomes a hermit hiding in his manor with only his menagerie of animals for company. This life of seclusion is interrupted when Queen Victoria falls gravely ill, and Dolittle is forced to come out of retirement in order to set sail with his friends to a mythical island in search of an even more mythical cure.

Downey is quite effective in the role, though he’s trying so hard to show that he’s not just doing a variation on his Sherlock Holmes characterization that he lays on what is presumably supposed to be a Welsh accent rather thick—it’s more impressive that the animals can understand what he is saying, rather than the other way around.  But he commits to it and does seem to have chemistry with the animals, who are voiced by an all-star cast. Rami Malek and John Cena shine as Chee Chee the gorilla and Yoshi the polar bear, respectively, and Ralph Fiennes steals the whole movie in a rare comedic turn as the vicious Barry the Bengal tiger.

All of this is not to say that the film isn’t without flaws—the effects are hit and miss, and, as is usually the case with a movie that’s meant to appeal to younger audiences, there’s a bit too much lowbrow humor. Still, the film gets an awful lot of mileage out of simply being so watchable. And Danny Elfman’s rollicking score is a delight, one of those that serves as a reminder that he’s capable of doing a lot more than just endless variations of the same old score for Tim Burton. Dolittle isn’t going to be winning any awards, but if you’re looking for a fun, fast-paced family movie, you could do a lot worse. –Patrick Gibbs