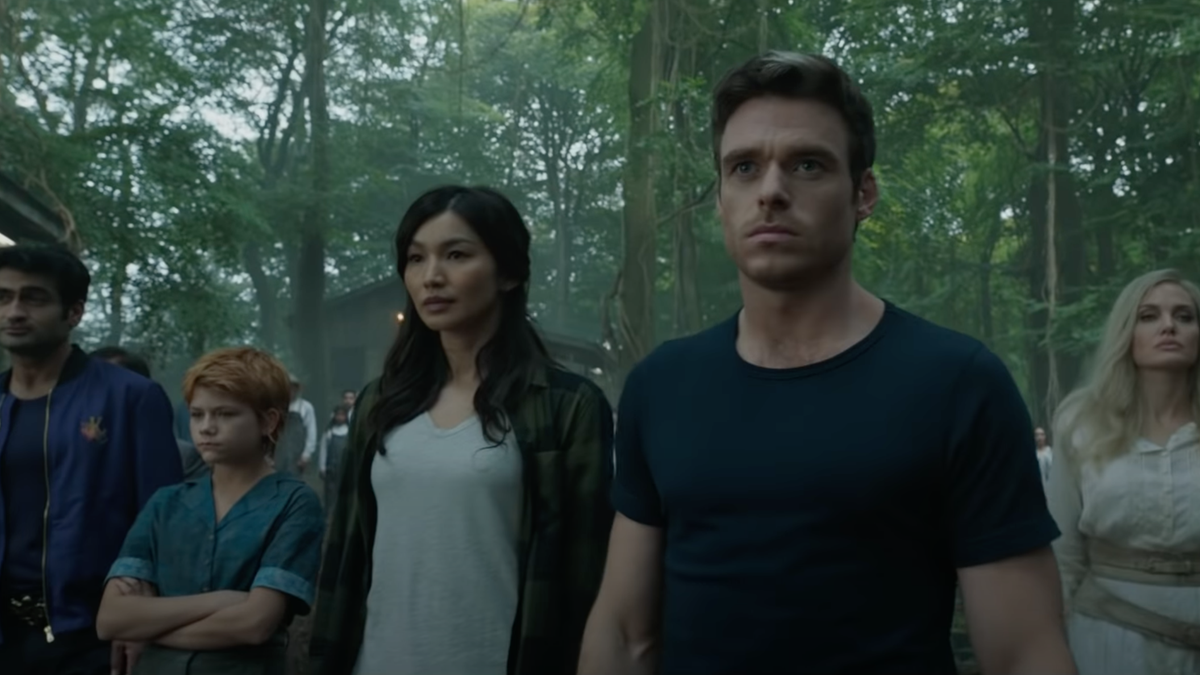 There seems to be a divide between those who are looking at Eternals as the latest Marvel movie and those who are more focused on it as Oscar-winning director Chloé Zhao‘s follow up to Nomadland, putting a lot of pressure on it to live to two different sets of expectations.

Eternals is the story of a team of ancient alien visitors who have been on earth for over 7,000 years. The group was sent by their Celestial leader, Arishem, to fight off a band of dangerous beasts known as the Deviants. When the last of the Deviants is gone, the Eternals scatter all over the world, each living in their own way as we meet them in the present day. The empath, Sersi (Gemma Chan, Crazy Rich Asians) is living as a human and working as a museum curator. Others live an isolated existence off the grid. But Sersi and Sprite (Lia McHugh, Songbird), an Eternal who lives her endless existence in the body of a twelve year old, learn that the Deviants have returned, and an unexpected tragedy forces them all out of the shadows to reunite against mankind’s most ancient enemy.

Eternals doesn’t perfectly fit the model of standard Marvel fare or that of the quiet, small-scale character drama of a Chloé Zhao fim, but it succeeds better than I thought was possible at being somewhere in between the two. While I pretty much always leave a Marvel Cinematic Universe movie feeling thoroughly entertained, Eternals is the first time since Black Panther that I felt like I’d seen something genuinely new.

Eternals is a grand, epic fantasy with bold ideas and concepts, and it could have very easily worked as a completely standalone film. Zhao dares to let things unfold slowly and deliberately, resisting the pressure to make the action sequences come at regular intervals just for the sake of doing so. She opts instead to get the maximum impact out of them when they do come. This made Eternals more compelling than most Marvel films, because Zhao and her cast really sell us on just how high the stakes are here.

The cast is great, with Chan giving a star-making performance, and Richard Madden (Cinderella, Bodyguard) is a commanding presence as Ikaris, the most powerful Eternal who shares many of the same powers as Superman. Hayek is terrific as Ajak, and Kumail Nanjiani (The Big Sick) and Brian Tyree Henry (If Beale Street Could Talk, Godzilla vs. Kong) as Kingo and Phastos, respectively, provide plenty of big laughs. Barry Keoghan (Dunkirk) is intriguing as Druig, and Lauren Ridloff (Sound of Metal) is a delight as Mikkari, a deaf Eternal with the power of superspeed.

Perhaps the best character dynamic comes from Thena (Angelina Jolie) and Gilgamesh (Don Lee, Train to Busan), whose deeply devoted friendship is one of the film’s strongest emotional aspects. It’s a very pleasant surprise to see Jolie playing just another member of the ensemble rather than the lead, but it’s impossible to imagine anyone bringing the kind of gravity that she does to the role. Cinematographer Ben Davis (Cry Macho, Guardians of the Galaxy) gives Eternals a rich, textured look that takes strong advantage of the sequences shot for IMAX, and the film also boasts some of the most seamless and stunning visual effects the MCU has ever given us.

Eternals is likely to be the most polarizing MCU entry in some time, because it doesn’t fit easily inside a mold and it’s not a tightly paced, butt-kicking action flick like Black Widow or Shang Chi and the Legend of the Ten Rings. That said, the ambitious story, the depth of the characters and ideas and the creative narrative structure kept me completely engaged throughout—it’s truly epic in the best sense of the word. For my money, Eternals ranks up there with the Dark Knight trilogy for the most daring and groundbreaking films in the genre, and a personal favorite. –Patrick Gibbs