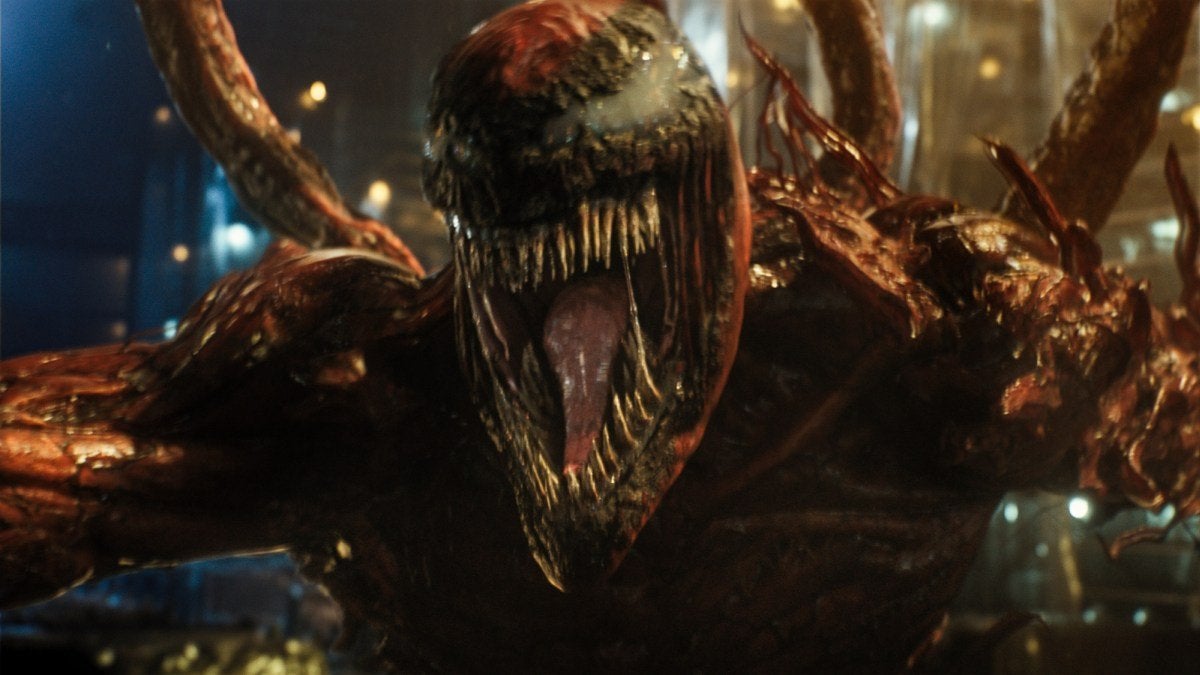 There are movies that carry with them a power to make us feel new things and embrace new ideas. Venom: Let There Be Carnage made me finally and definitively embrace atheism, because no kind and benevolent God would have allowed me to have to sit through it.

Over a year after the events of the first Venom, investigative journalist Eddie Brock (Tom Hardy, Mad Max: Fury Road) struggles to adjust to life as the host of the alien symbiote Venom, which grants him superhuman abilities in order to be a lethal vigilante. Brock attempts to reignite his career by interviewing serial killer Cletus Kasady (Woody Harrelson, Natural Born Killers, Zombieland, War for The Planet of the Apes). While gaining Kasady’s trust, he literally learns where all the bodies are buried. In the resulting publicity, the governor of California lifts the suspension on the death penalty just for Kasaday—because it’s just that simple—but Cletus, who has become the host of the red symbiote, Carnage, escapes prison after a failed execution.

And speaking of failed execution, screenwriters Kelly Marcel (Cruella) and Tom Hardy and director Andy Serkis have managed to do such spectacularly bad work on this one that, in the cases of Hardy and Serkis, my suggestion would be “don’t quit your day jobs.” I’m a huge admirer of Serkis as an actor and consider him to be one of the all-time greats, but stepping behind the camera hasn’t been a resounding success for him up this point. Both Breathe and Mowgli: Legend of the Jungle received pretty lukewarm reception. Now his attempt at a mainstream blockbuster is so haphazard and aimless that even the presence of legendary cinematographer Robert Richardson—the go-to guy for Martin Scorsese, Oliver Stone and Quentin Tarantino—can’t even manage to make Venom: Let There Be Carnage look moderately slick.

The best thing that can be said about it, apart from being mercifully short, would be that it is a little more sure of what direction it wants to go in than this first film. It commits to cartoonish slapstick comedy instead of just having it periodically creep in. Not only does the humor fall flat, however, but Harrelson’s serial-killer character has far too many dark and disturbing elements for it mesh with the kind of A.L.F. on acid–meets–The Odd Couple approach they are going for with Venom and Eddie.

All around, the performances are weak. It’s really a bit dumbfounding that actors of the caliber of Hardy, Harrelson, Michelle Williams (Brokeback Mountain, Manchester By The Sea) and Naomie Harris (Moonlight, Southpaw, No Time To Die) are working with a great actor as their director, yet no single performance entirely works. Nor do any two performances complement each other.

There’s also a staggering number of plotholes and contradictions, not the least of which is the fact that it’s well-established, numerous times, that loud sounds can harm or even kill the symbiotes. Yet, Venom spends an entire night partying at a rocking club. It’s entirely possible that Venom: Let There Be Carnage is sloppier and more nonsensical because it was cut down to be as short as possible, given the overall quality, but only the most obsessive and nondiscriminating fans are going to want any kind of extended cut of the film. For me, Venom: Let There Be Carnage ranks far below even Daredevil and Ghost Rider on the list of Marvel-inspired movies, and ranks among the worst films of the year. –Patrick Gibbs