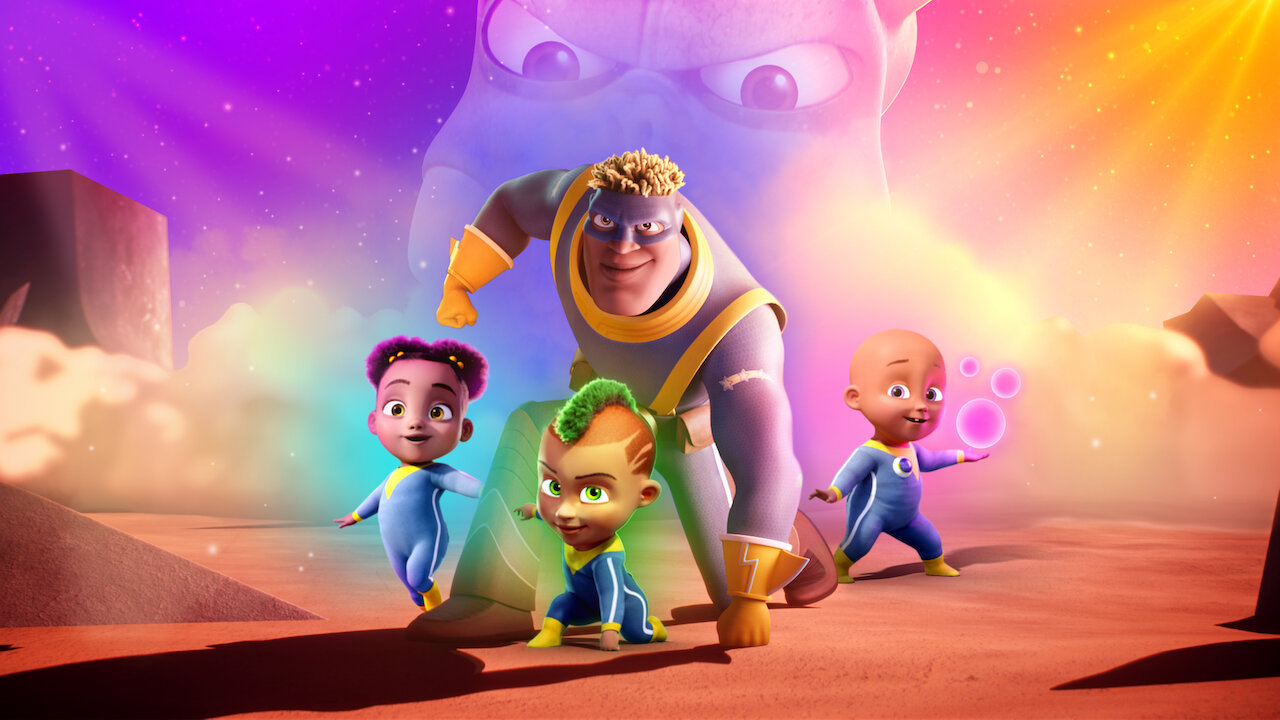 There have been many aspects of the COVID-19 pandemic that have been jarring and made the world feel like it was spinning off its axis, but perhaps none more unlikely than the fact that it has been over a year since the last Marvel movie was released. But Netflix has been doing their best to supply us with off-brand superheroes during the national shortage, with a second season of The Umbrella Academy currently taking the service by storm. And now we have the animated family comedy Fe@rLeSS_.

Reid (voiced by Miles Robbins of Blockers) is a typical teenager who is so hooked on his video game system that it might as well be an IV. But he’s in for a whole new level of adventure when a freak occurrence involving a wormwhole in space allows his favorite superhero video game—where he uses the gamer tag “Fe@rLess_”—to  drop three super-powered space babies into his backyard. Reid is left with no choice but to  keep them safe from the evil Dr. Arcannis and try to get them back to their hero father, Captain Lightspeed, with the help of his assigned study partner, Melanie (Yara Shahidi, Black-ish).

The premise is a bit nonsensical, even for science fiction, but my initially skeptical four-year-old nephew (“What? They aren’t from space. They’re from the game! How can they be on the Earth if they live in game?!!!”) quickly went with it, and I decided to follow suit. I’m glad I did. Because, while it’s not exactly Pixar quality, Fe@rLess_ is an enjoyable and clever little movie with plenty of humor and heart. It feels a lot like a DreamWorks release from the mid 2000s, albeit with cheaper animation and a “celebrity voice cast” assembled from the bargain bin, with Gabrielle Union being the only name that even registered to me. And this is despite an ending credits sequence that practically begs you to be impressed at the fact that they have brought such superstars as Miguel and Jadakiss together in the same film.

Director Cory Edwards (Hoodwinked), who also co-wrote the screenplay along with John Paul Murphy (Gnome Alone),  brings a fair amount of talent and an abundance of enthusiasm to the production, which counts for a lot. Robbins, Shahidi and Union are all well cast, though the movie would have been better with more dynamic actors voicing Arcannis and especially Lightspeed. Not to dis Miguel and Jadakis, respectively, but they shouldn’t quit their jobs, which according to a Google search is in the music industry (There’s a reason I review films and not albums).

Fe@rLeSS_ is not likely to be a contender for best animated movie of the year, but it’s a lot of fun and the super babies are sure to be well received by the kids, to the point where you can expect repeat viewings. I’ve already seen it twice, once with my nephew and once without. While I’m not in any rush, I could watch it again. –Patrick Gibbs