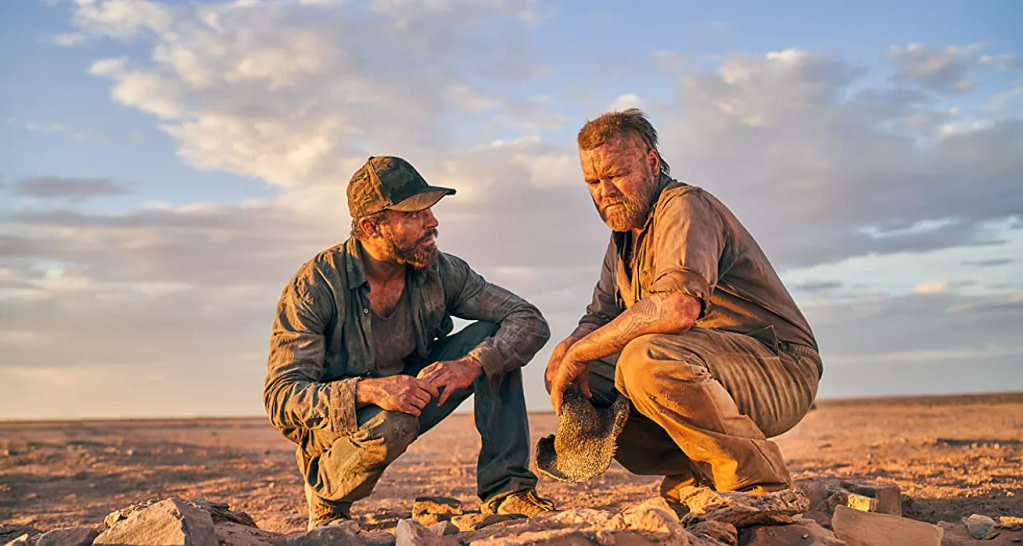 Gold feels like an impressive demo reel for both Efron and Hayes than it does like a substantive film that will leave any kind of lasting impression. Photo Courtesy of Deeper Water Films and Rogue Star Pictures.

The possible end of civilization as we know it may not be anyone’s go-to topic for entertainment at the moment, but Hollywood always has a stockpile of them. Gold is the latest bleak, dismal vision of the future you can check out between trips to the Army Navy store for supplies for your bunker.

Gold is set “Some time, some place. Not far from now,” according to the opening titles, and that pretty much sets the tone for the type of imaginative and intricate world building we’re entering into here. An unnamed drifter (Zac Efron) arrives at an outpost and pays a local man (Anthony Hayes, Rabbit-Proof Fence, War Machine) to give him a lift to an area known as “The Compound” so he can do whatever it is people without names do in place like whatever that is. On the way, the two men happen upon a gold nugget the size of a small boulder. It’s too big to lift but way too big an opportunity to ignore. The two men decide that the younger passenger, being the attractive one with name recognition (at least in a world where names exist) will stay and guard the gold while the older man with the truck leaves to secure the necessary tools to excavate. The young, dreamy-eyed drifter endures the harshness of the elements, thirst, hunger and paranoia as he guards the prize, waiting for a companion he doesn’t entirely trust to return.

Hayes directs from a screenplay he co-wrote with his wife, costume designer Polly Smyth. Together, they have created a paper thin but fairly involving variation on Cast Away and The Treasure of The Sierra Madre that is better than it has any right to be, thanks to an all-in performance from Efron. The former High School Musical heartthrob has come a long way as an actor, and he’s making quite a prolific career based on rising above mediocre material.  That’s not to say that Gold has nothing else going for it: Hayes sets the tone nicely, and the Australian outback location makes for some barren but picturesque imagery.

Gold is a serviceable enough performance-based survival thriller, but the over-reliance on making vagaries a storytelling choice is an obvious cover for the fact that there simply isn’t much of an idea here. It’s mildly compelling to watch Efron’s character descend into desperation and borderline madness, and Susie Porter (Paradise Road) is terrific as a scavenger who stumbles across Efron’s character. The interplay between the two of them is the highlight of Gold, and it elevates the entire film a notch.

Gold is a decent enough movie that keeps you watching, and as a vehicle to showcase what a magnetic actor Efron has become, it does its job very well. Still, Gold feels like an impressive demo reel for both Efron and Hayes than it does like a substantive film that will leave any kind of lasting impression. If this were a festival short, it would be a winner, but as a feature, Gold is just another shiny object of questionable value. –Patrick Gibbs