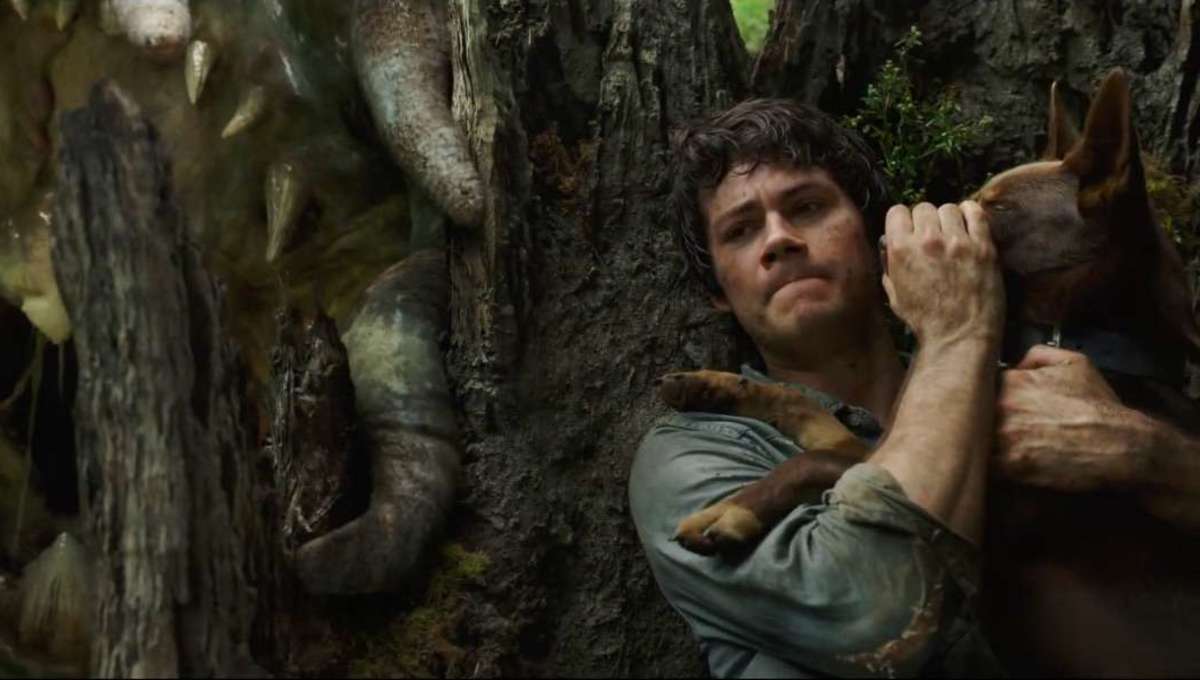 Entertainment One
Streaming on Video on Demand 10.16

The experience of 2020 as a whole, how we’ve experienced it and how we remember it, will be different for everyone. But as someone who has always marked time in movies, there are two films that, for me, will forever represent not just some of the best that the medium has to offer, but the essence of the year as a whole. (And oddly,  they both come out in wide release this weekend.) The first, The Trial of the Chicago 7, though set in the past, perfectly portrays the tide of anger and righteous indignation that has swept through our country over corruption in Washington and racism in America. But when it comes to living through COVID-19, especially for those of us who are stuck in our hobbit holes and are feeling very aware that we are single, the film that represents us is the post-apocalyptic comedy adventure Love and Monsters.

Seven years after a Monsterpocalypse that wiped out left 95% of humanity, Joel Dawson (Dylan O’Brien, The Maze Runner),  is living underground as part of a colony of survivors. After reconnecting through ham radio with his high school girlfriend Aimee (Jessica Henwick), who is now 80 miles away at a coastal colony, Joel begins to fall for her again. As Joel realizes that there’s nothing left for him underground, he decides—against all logic—to venture out to Aimee, despite the dangerous monsters that stand in his way.

Director Michael Matthews (Five Fingers for Marseilles) and screenwriters Brian Duffield (Spontaneous) and Matthew Robinson (Dora and the Lost City of Gold) have given us survival in the age of the kaiju movie, with a tone that lands  somewhere between Reign of Fire and Joe vs. the Volcano. O’Brien, whom I couldn’t have liked much less as Jason Bourne and dialed up to 11 bad ass in the Islamophobic action thriller American Assassin, is incredibly charming as the lovable loser Joel, the guy that the colony relegates to duties like reheating canned ravioli in order to keep him far away from any situation where he can be a liability. He’s closer to Buddy the Elf than to Mad Max, which makes the movie so much more fun.

Even when the protagonist in a post-apocalypse story is a teenage girl, she’s still a battled-hardened, macho man, and the departure from formula here is beyond welcome. Joel is powered by love, tenacity and a good heart, and he’s easily one of the best protagonists of the year. Michael Rooker (Guardians of the Galaxy, The Walking Dead) and Arianna  Greenblatt (The One and Only Ivan) are perfect as a pair of wandering survivalists Joel meets along the way, and Henwick (Game of Thrones, On The Rocks) delivers an Aimee that makes Joel’s journey seem well motivated, but emerges as her own character instead of a mere Macguffin.

I won’t spoil any details about my favorite character, but you’ll know her when she comes along, in a gorgeous and moving sequence involving one of my top-ten favorite songs of all time.

But a kaiju movie is nothing without good kaiju, and Matthews and the visual effects team know that the “ooh, ah!” factor is at least as important as the running and screaming. There’s a surprising amount of personality that comes through with each individual monster, and just a slight, cartoonishly cute touch mixed in when it’s appropriate.

I know that a movie is special when I find myself overpowered by the urge to watch again, right now, as I’m writing the review a couple of days later. Love and Monsters felt almost made for me at this moment, and it may be the kind of movie that I like so much that I get accused of building it up too much and setting expectations too high, but if I do, at least I will have talked you into seeing it. It made me feel less alone, and for that reason, it will always hold a very special place in my heart. –Patrick Gibbs