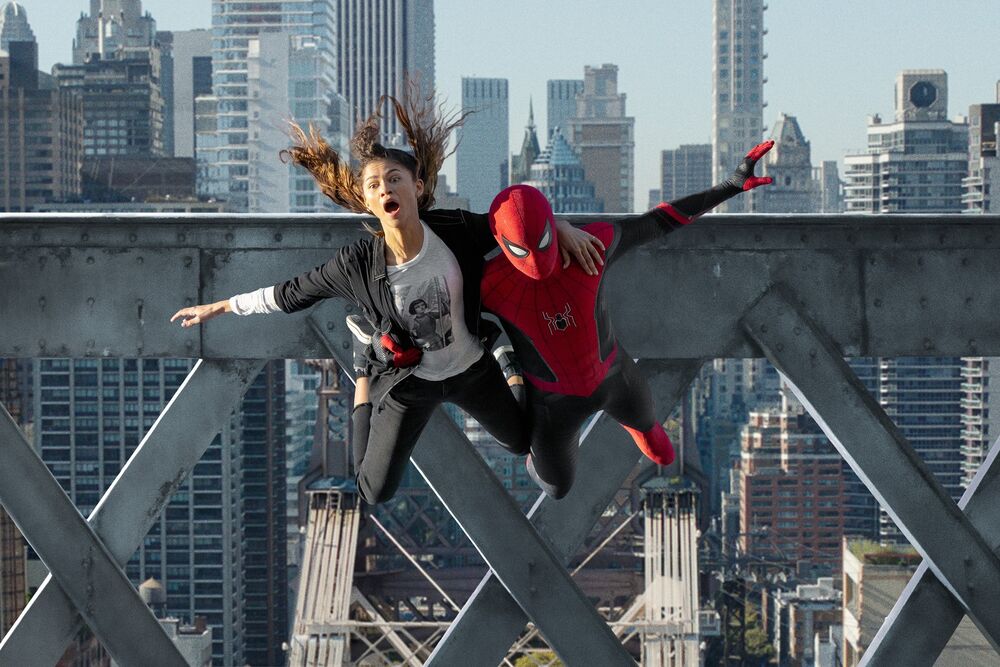 It’s a bit of a pet peeve of mine when I mention that I’ve seen a new film on social media and I get flooded by people shouting “No spoilers!” I’m a critic. Avoiding spoilers is part of my job—you can relax. But sometimes, such as with Spider-Man: No Way Home, this can be a challenge.

In Spider-Man: No Way Home, Peter Parker (Tom Holland) has had his secret identity revealed to the world thanks to internet news personality J. Jonah Jameson (J.K. Simmons, Being the Ricardos, the original Sam Raimi Spider-Man trilogy), and everyone now knows that this young man, who is just about to graduate high school, is Spider-Man. Thanks to lies told by the villainous Mysterio, everyone also thinks he might be a pretty bad guy.  When Peter finds his life and the lives of his girlfriend MJ (Zendaya) and his best friend Ned (Jacob Batalon) in ruins and their college hopes dashed, he goes to the only person he can think of who might be able to help: Doctor Stephen Strange (Benedict Cumberbatch). The sorcerer agrees to cast a spell that will make the world forget that Peter is Spider-Man, but when the spell goes wrong, it begins to pull villains from parallel universes into this one, and Peter’s problems once again become not about school, but the fate of the world.

In all likelihood, you already knew most of what I’ve stated above, as well as the fact that the figures emerging from the Multiverse include significant characters from the Sam Raimi Spider-Man and the Marc Webb Amazing Spider-Man films that came before, because Spider-Man: No Way Home is one of the most hyped movies of the past 20 years, if not of all time. There are high expectations for this film, and in terms of being a high-quality blockbuster with a great story and characters, it didn’t just live up to those expectations for me—it far exceeded them.

Director Jon Watts and Marvel Studios megamind Kevin Feige don’t just bring Doctor Octopus, Green Goblin and others into the movie for added mayhem and geek service, they stay extremely faithful the continuity of those incarnations and are more than respectful to fact that if it wasn’t for what Spider-Man did for comic book movies in 2002, there would be no Marvel Cinematic Universe.  Alfred Molina’s Dock Ock  and Willem Dafoe’s Goblin are glorious to see again, and the actors are allowed to explore the depths of characters in ways I hadn’t even dared hope for in this hilm. Jamie Foxx is far better as Electro in No Way Home than he was in The Amazing Spider-Man 2, staying faithful to the idea of the character but dropping the silliest aspects of that portrayal. Holland, Cumberbatch and the gang could not be better, and Marisa Tomei’s Aunt May is given a more significant role and may well be the film’s MVP. The action is spectacular and relentless, and the comedy is even better.

Spider-Man: No Way Home is a “throw everything at the wall and see what sticks” kind of blockbuster that is aimed squarely at the fans, but it’s also a wonderfully character-driven film that has an emotional depth and soul I didn’t see coming. There’s a lot that I want to dive into here that I can’t, and honestly I felt tempted to publish  a post-mortem next week instead of a review. But what I can say is that Spider-Man: No Way Home ranks as one of the most entertaining MCU entries, brought me more joy than I thought was possible from the genre at this point and is perhaps even one of the most satisfying superhero movies ever made. Anything else that you want to know, you’re going to have to learn in a darkened theater and not from me. –Patrick Gibbs