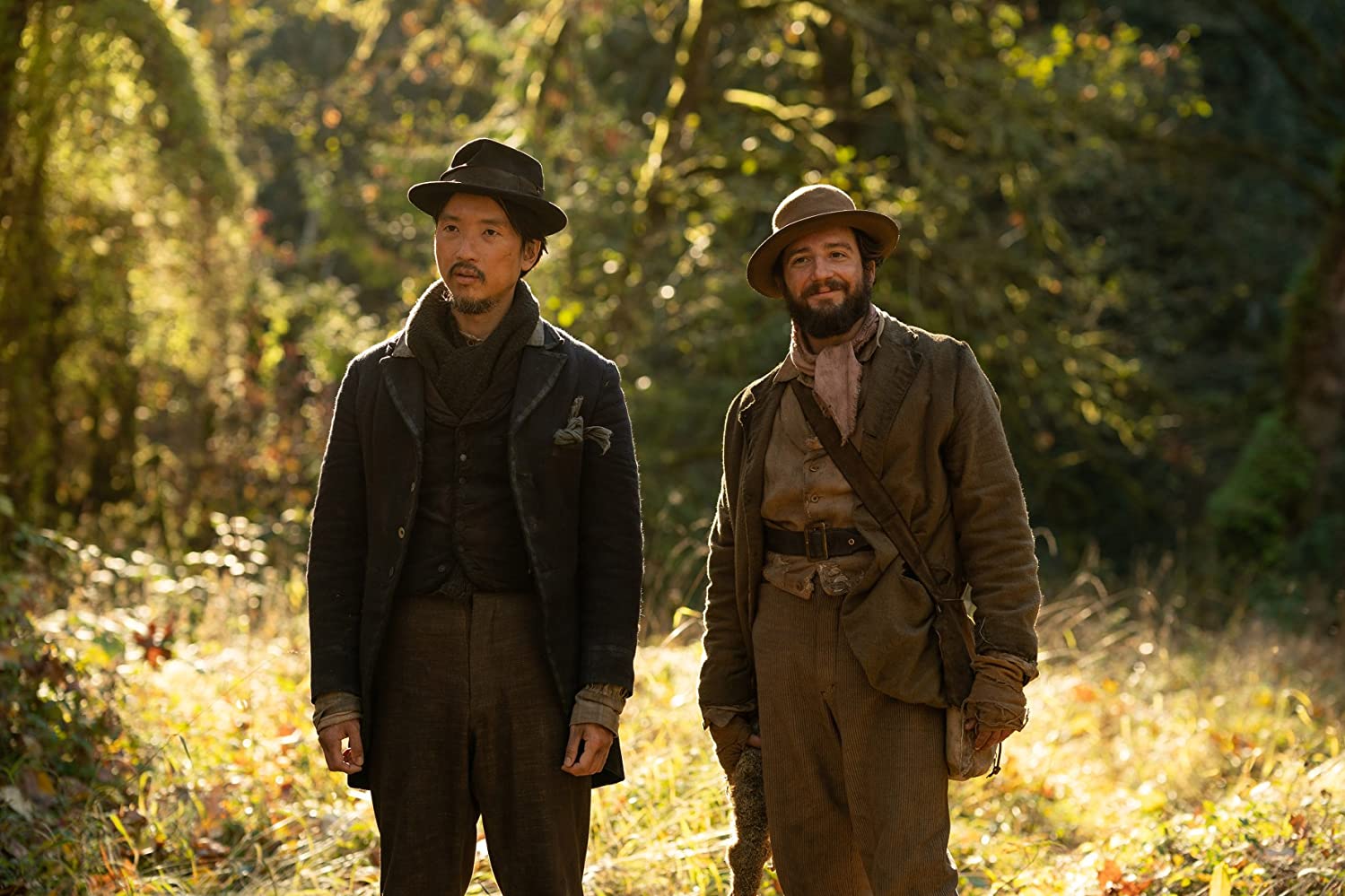 FilmScience and IAC Films
Streaming on Video on Demand: 07.10

Why buy the cow if you’re getting the milk for free?

This is a sexist and stupid expression,  and if you haven’t heard John Mulaney‘s hilarious stand up routine about it, you should stop reading this and look it up on YouTube right this second—it may be the funniest thing ever recorded. I couldn’t help thinking of it as I watched director Kelly Reichardt’s charming and engrossing new film, First Cow.

This 19th-century Western follows Otis “Cookie” Figowitz (John Magaro) as he travels west and joins a group of fur trappers in the Oregon Territory. He doesn’t get along well with the trappers, but he makes friends with a Chinese immigrant, King-Lu (Orion Lee), who is also seeking his fortune on the frontier. The two men decide to collaborate on a business venture, making and selling delicious buttermilk biscuits and scones that Cookie makes to perfection. They have a corner on the market because there is only one milk cow in the territory. But the catch is, it’s not their cow. The animal belongs to a wealthy landowner (Toby Jones), Chief Factor for trading in the region.  The two enterprising men sneak in at night to perform clandestine milkings, and it seems no one is the wiser. But for how long?

Reichardt’s premise is charming in it’s simplicity and demonstrates that if you can be made to care about the characters you are watching, not every movie has to feature the fate of the earth hanging in its balance. That being said, high stakes are relative to your circumstances, and First Cow shows us real people living humble lives under difficult situations. The seemingly mundane story is absorbing and at times suspenseful and surprisingly relatable. Reichardt (Old Joy, Wendy and Lucy) has a low-key, almost minimalist style that can easily be mistaken for uninspired if you are stuck on being dazzled by every shot. But there is a deliberateness and a smooth sense of flow that occurs as she lets the story speak for itself. The bold choice of a 1.37:1 aspect ratio is a surprise, but I found that it added to the intimacy of this small-scale story.

Magaro (The Big Short, The Umbrella Academy) is endearing in the lead role of Cookie, a unique protagonist who doesn’t easily fit into any mold. Lee (White Dragon, Warrior) is a charming presence,  and the fact that you instantly like these two in much the same way that they like each other is key to the film working so well. Toby Jones is a prolific and skilled character actor who will always be Dobby the House Elf to me, and he’s excellent here. This is because Reichardt is less interested in making him bizarrely quirky than allowing him to be real, and I wish he was allowed to do that more often in bigger films. Further, Ewen Bremner (Trainspotting, Wonder Woman) adds a notable presence as a brash Scottish trader.

First Cow is a captivating little film that really deserves to find an audience, and it’s a refreshing change of pace from what you expect from mainstream cinema. It will likely be remembered as one of the great buried treasures of 2020. –Patrick Gibbs