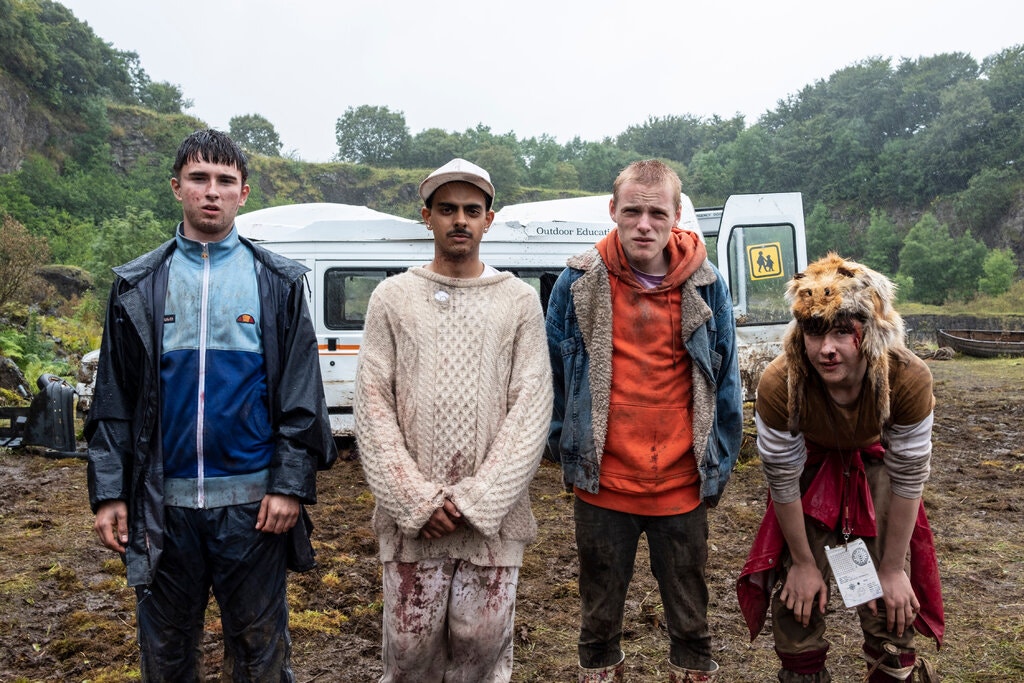 There are many keys to making a successful and memorable film, and the right title is a big one. Unfortunately, sometimes it just never comes along, and that is certainly the case with Get Duked!, a zany horror comedy that premiered at SXSW in 2019 under the rather gimmicky moniker Boyz in the Wood. But between the untimely passing of John Singleton and the increased awareness of systemic racism in America, the producers chose to go back to the working title, Get Duked! While I agree with the reasoning behind the change, the working title is awkward—poorly used exclamation points are personal peeve—and it sounds like something that either Johnny Knoxville or Phil Robertson might star in. It’s always sad when bad titles happen to good movies.

Dean, Duncan and DJ Beatroot (Rian Gordon, Lewis Gribben and Viraj Juneja, respectively) are a tight-knit trio of teen goofballs from Glasgow who embark on the character-building camping trip based on a real-life program known as the Duke of Edinburgh Award, where foraging, teamwork and orienteering are the order of the day. Eager to cut loose and smoke weed in the Scottish Highlands, the boys find themselves paired with straight-laced Ian (Samuel Bottomsley), a fellow camper determined to play by the rules. After veering off path into remote farmland that’s worlds away from their urban comfort zone, the boys find themselves hunted down by a shadowy force hellbent on extinguishing their futures.

Writer-director Ninian Doff, who has had an impressive streak of award-winning music videos, makes his feature debut with this morbid, off-the-wall horror comedy that plays like someone put Follow Me, Boys!, The Most Dangerous Game and Trainspotting in a blender and hit puree.

Get Duked! is an outrageous and often hilarious romp that brings to mind Hot Fuzz and The Private Eyes. Despite a shaky start, I found myself becoming increasingly amused until I was laughing out loud. It’s the kind film that will be quoted and celebrated at late-night screenings for years to come, and I can see myself frequently viewing it late at night when I need a good laugh.

The young leads are childishly charming, each getting their moments to shine, but Bottomsley’s Ian is the closest thing to a protagonist, and he makes the most of it. Though it’s ultimately Gribben as Duncan who gets many of the biggest laughs. They are surrounded by an impressive cast of veterans, including Eddie Izzard, Katie Dickey, James Cosmo (Braveheart) and Kevin Guthrie (Fantastic Beasts and Where To Find Them) and Jonathan Aris (Good Omens), and they all commit to the crazy shenanigans with gusto.

The reliance on over-the-top, shock-value violence as comedy is not going to play to all tastes, but this is hardly trying to be a movie for everyone. It’s aimed squarely at the Simon Pegg crowd, and should find a warm reception among them.

Get Duked! is nothing particularly fresh or innovative, but it does what it sets out to do very well. And during a week when crazy people saying stupid things and behaving shamefully has dominated at-home viewing, it’s more than welcome to have some of the idiocy be entertaining and intentional. If you’re looking for raucous and irreverent fun this weekend, it’s time to give in and “Get Duked!” –Patrick Gibbs