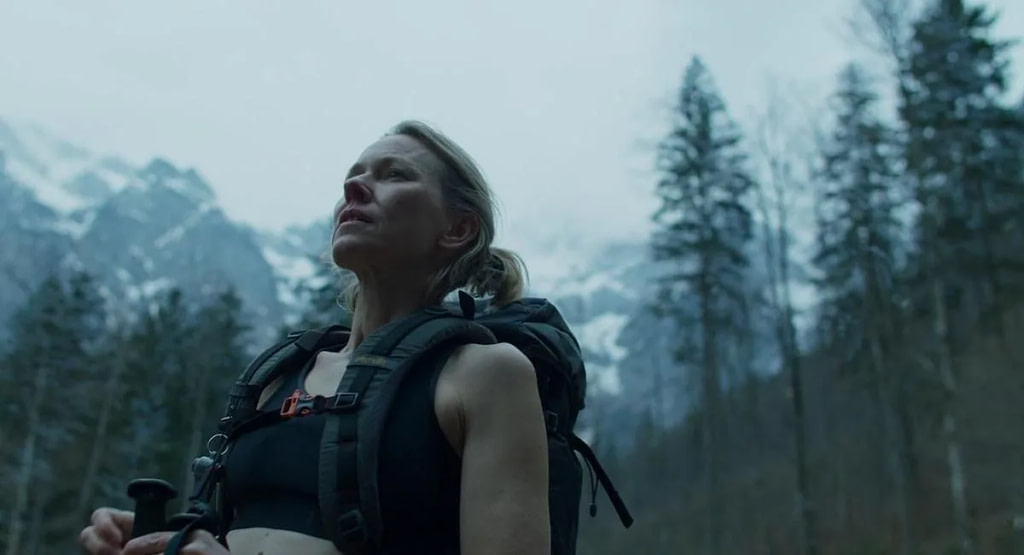 Infinite Storm is too grounded in reality to be thrilling escapist action but far too labored and maudlin in its quieter character moments to work as a drama. Photo Courtesy of Maven Screen Media and JamTart Productions.

I’ve come to the conclusion that mountain climbing has become to documentaries what superheroes are to narrative films: We get a bare minimum of 82 per year. Infinite Storm, the new Naomi Watts vehicle, isn’t a documentary, but it is a climbing picture, so perhaps there’s a documentary about Spider-Man coming in the near future.

Infinite Storm is “based on a true story” and stars Watts as Pam Bales, an experienced climber and rescue volunteer who is ascending Mt. Washington when a blizzard forces her to head right back down. She then happens across John (Billy Howle, On Chesil Beach, Outlaw King), a young man who is stranded, ill equipped and well on his way to a frozen death. Pam and John will die on the mountain unless her expertise and tenacity can get them both safely to the bottom before night falls and they become engulfed by some seriously bad weather.

Polish director Małgorzata Szumowska makes her English-language debut in the mercifully short (yet still far too long) demonstration of the fact that just because something was interesting enough to inspire a magazine article doesn’t necessarily mean it should be made into a movie. It’s not that Infinite Storm is a bad film, per se, it’s just so blandly unremarkable, monotonous  and routine that it fails to make any kind of compelling case for its own existence. Szumowska photographs the scenery nicely, but her sense of pacing and story structure is off, and it’s a prime example of an acclaimed international director being underserved by weak American writing.

Watts is a great talent who has the physicality needed for the role, and as a long time admirer I really wanted to see Infinite Storm be the comeback that she needs right now. Sadly, the screenplay by Joshua Rollins, best known for his moving performance as “SWAT Sniper” in The Dark Knight, fails to make Pam come across as either compelling or human most of the way. Her choice to verbally berate John to motivate him to keep moving—insulting him and cursing at him—may have worked on some level in real life, but it’s so lazily and tediously written here that it’s feels more like a poorly handled attempt at witty repartee that one of the characters refuses to join in on until they are provided with at least one, solid zinger. Howle is quite convincing, and the movie does more for him than it does for Watts.

The final section of the film moves slower than a dead snail and undermines its big, dramatic reveal with cheesy, melodramatic dialogue (“Even in the pain, even in the storm, there is so much beauty, The whole universe appears as in an infinite storm of beauty”), and comically drawn out moments, such as Pam sitting on the floor in front of her fridge, reveling in the slice of cold pizza and canned beer she might very well never have experienced had she died, then collapsing to the floor sobbing, presumably because the beer is flat. That grippingly honest sequence is followed by more unflinching reality as Pam takes off all her clothes and soaks in a bathtub for what felt like four full minutes as she stares thoughtfully at the bruises on her two remaining legs, which she is so grateful to have and which she knows are definitely still there because she’s naked and, oh God, why isn’t this movie over yet?

I didn’t hate Infinite Storm, and in fairness, there are scattered moments where I started to feel something not unlike caring, but they were few and far between. Infinite Storm is too grounded in reality to be thrilling escapist action but far too labored and maudlin in its quieter character moments to work as a drama. If you really love snowy mountain scenery and have nothing better to do for an hour and 37 minutes, by all means, go see this one in a theater where it will undoubtedly play best. But if it hits digital as a $20 rental, don’t complain to me if you end up crying yourself to sleep with the sad, faint memory of the wrinkled green face of Andrew Jackson haunting your dreams and filling you with regret. –Patrick Gibbs