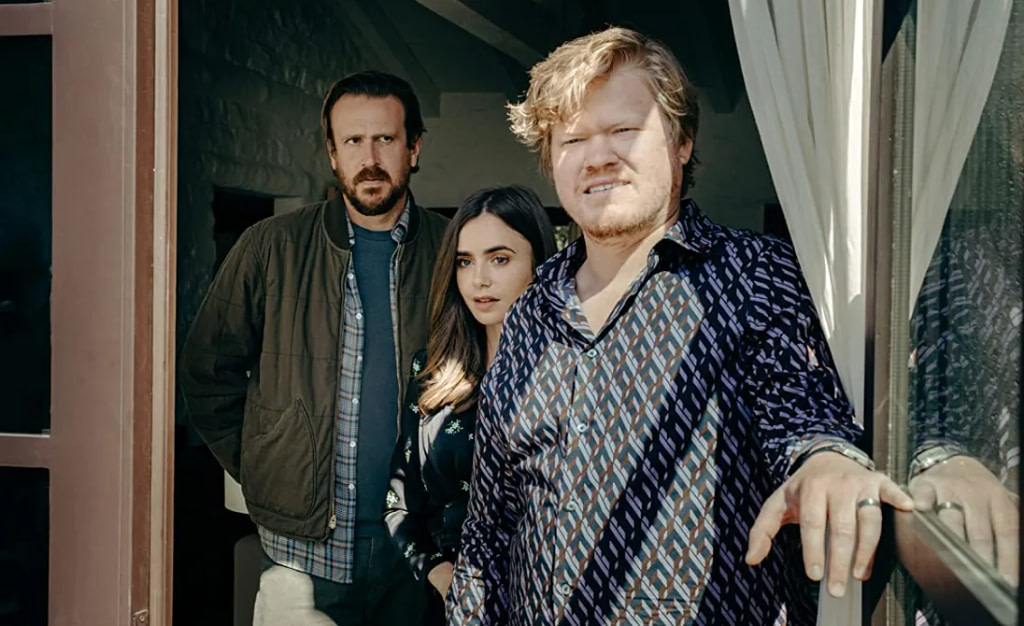 I consider Jessie Plemons to be one the finest actors working today, which is all the more reason to resent Windfall for wasting his talent and my time. Photo Courtesy of High Frequency Entertainment.

If I were to say that Jesse Plemons’ new film, Windfall, will be completely forgotten before he’s even had a chance to lose the race for the Best Supporting Actor Oscar in less than a week, it would sound like I’m not a fan. In fact, I consider Plemons to be one the finest actors working today, which is all the more reason to resent Windfall for wasting his talent and my time.

Windfall takes place over a period of 36 hours as a billionaire (Plemons) returns to his plush vacation home, along with his wife (Lily Collins, Emily in Paris), to find that an unnamed man (Jason Segel, How I Met Your Mother) is robbing the place. Now, obviously he doesn’t just offer up his name—he’s a burglar—but this is also the type of attempted art film wherein none of the characters have a name. The credits identify them merely as CEO, Wife and Nobody, respectively. The story unfolds as what can best be described as a “light” hostage situation, as the clearly inexperienced intruder tries to form a plan, and the couple alternate between arguing with him and with each other as he tries to form a plan.

Director Charlie McDowell (The One I Love, The Discovery) worked with screenwriters Justin Lader and Andrew Kevin Walker to carefully put together this versatile film, capable of being an unfunny comedy one moment, a tenseless thriller another moment and a myopic social commentary the next. Plemons and Collins give serviceable, if unremarkable, performances as characters whose dialogue is sloppy, repetitive and on the nose, but Segel may have found the role that he was born for: His name is Nobody, and you’re not sure if you’re supposed to like him or want to see him get hurt.

In all seriousness, I like Segel overall, even if it’s in much the same way that one can’t help but love a big, dumb but loyal dog. Still, he has yet to give a performance that I really buy into, apart from in The Muppets, and even there he stood out as the least natural of the bunch. In Windfall, I found myself going to great effort to feel invested in his ill-defined character, only to be continuously undermined by a total lack of substance and the same “Look at me, guys! The camera’s rolling, and I’m not even smiling. Hot dog, am I an actor or what?” expression that he has had on his face for over 20 years now.

Still, Windfall‘s greatest assets are its cast and location, which can best be described as functional. I imagine the development process involved Lader and Walker delivering a draft of the pretentious and aimless screenplay to McDowell, only to have him declare that it didn’t feel raw and real and needed serious reworking. At this point, I imagine, the three men went through the script page by page, meticulously adding variation on “fuck” throughout, and called it good. The constantly shifting tone feels vaguely intentional, but it’s hard to create twists, turns or a whiplash effect when the vehicle won’t even start. The harsh violence of the third act wants to be shocking but just feels hackneyed to the point where it genuinely made me angry at the filmmakers.

When Windfall ended, I half expected an email from Netflix customer service, apologizing for the fact that the screener was playable and offering to refund 92 minutes of my life, and I’m still holding on to hope. You’ll feel at least as enlightened and far more entertained by binge watching Is it Cake?  – Patrick Gibbs