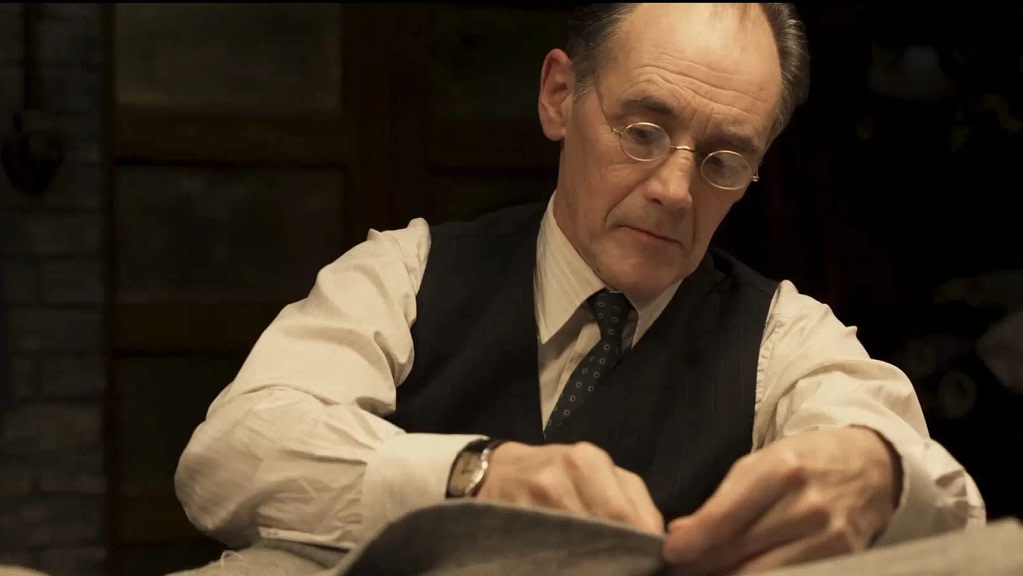 The Outfit is the most entertaining and satisfying film to hit theaters this year so far and a fine addition to the mobster genre. Photo Courtesy of FilmNation Entertainment

I’ve had an affinity for mob movies for much of my life. The larger-than-life genre is such a cinema staple that it’s hard to make one that stands out. Graham Moore has done just that with The Outfit, and much of the reason why can be summed up in two words: Mark Rylance.

In The Outfit, Academy Award winner Rylance plays Leonard, an Englishman who used to make suits on Saville Row in London until a family tragedy caused him to pack up and cross the Atlantic, opening up his own shop in Chicago.  Leonard makes the finest suits money can buy, and since this is Chicago in the early 1950s, he must cater to a very specific clientele. Roy Boyle (Simon Russell Beale, The Death of Stalin, Operation Finale), the head of the Boyle crime family, takes a liking to Leonard’s work, and the humble cutter—Leonard makes it clear that he is not a tailor, he is a fabric cutter—owes much of his success to Boyle. But one fateful night, when Boyle’s son Richie (Dylan O’Brien, The Maze Runner, Love and Monsters) comes to hide out in Leonard’s shop after he’s been shot, the Englishman is forced to do a different type of stitching, and, before long, Leonard is caught up in something that put his life, his livelihood and his favorite employee (Zoey Deutch, Zombieland: Doubletap, Before I Fall) in jeopardy. In the course of one night, the humble shop owner will have to stay one step ahead of the ruthless mobsters and weave the most intricate design of his career in order to survive.

Moore, who won an Oscar for writing The Imitation Game, makes his feature directorial debut with The Outfit, and while it’s got plenty of cinematic atmosphere, in many ways it has the feel of a theatrical play: The action is confined to one setting, and it takes place in a single night, with a cast of colorful characters making entrances and exits as the story dictates. These theatrical sensibilities worked for me, giving it unique charm and tone. Moore keeps the tension built and the pacing tight. The Outfit is a rare gangster picture that relies far more on building a nail-biting feeling of suspense as to how it will all end rather than in racking up a high and bloody body count, and that gives the violence all the more impact when it does come. The musical score, by the incomparable Alexandre Desplat (The French Dispatch), sets a perfect tone, and it’s a suave, stylish new addition to the composer’s elegant ensemble.

Rylance, who had achieved most of his biggest success on the stage until Steven Spielberg’s Bridge of Spies, is the perfect match for a story that dances between the two mediums. Rylance has a lot of backup, with Deutch, O’Brien and Beale all nibbling the scenery just enough to add flavor without full on chewing, and Johnny Flynn (Emma., Beast) is pure dynamite as Frankie, an ambitious hood who will do anything to be like his mentor, Boyle. Still, as strong as the supporting cast is, this is the Mark Rylance show all the way. As an unabashed fan, I couldn’t have been more pleased to see him in such a perfectly fitted, custom-made star vehicle.

For my money, The Outfit is the most entertaining and satisfying film to hit theaters this year so far, keeping things short and sweet at a modest runtime of 106 minutes. It’s a movie I can see myself watching again and again, a fine addition to a genre that—if done right—never goes out of style. –Patrick Gibbs