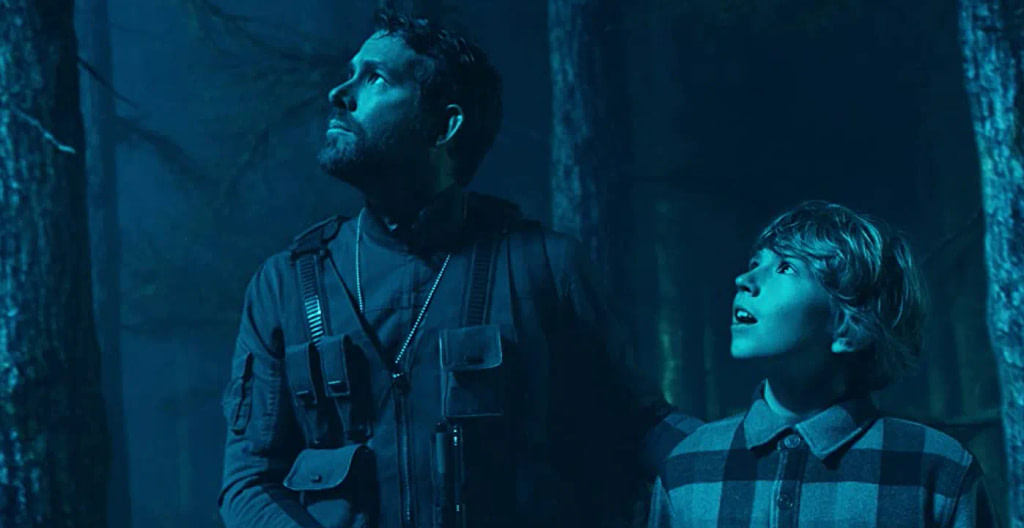 The Adam Project is a can’t-miss event of family fun that isn't going to be on any top ten lists, but it gave Patrick Gibbs exactly what he wanted. Photo Courtesy of 21 Laps Entertainment and Maximum Effort.

A mere eight months after Ryan Reynolds and director Shawn Levy (Night at the Museum, Stranger Things) paired for the smash hit, Free Guy, their big follow-up project is already here, courtesy of the whacked-out movie release timeline created by COVID. It’s oddly fitting, since The Adam Project, a science fiction homage to the Steven Spielberg Amblin films of the ’80s, is all about whacked-out timelines.

In The Adam Project, our protagonist is Adam Reed (Walker Scobell), a mouthy and uncommonly short 12 year-old boy with a penchant for getting in fights at school and causing headaches for his widowed mother, Ellie (Jennifer Garner). Adam’s lonely and aimless existence is interrupted by the arrival of an expected visitor in the form of a time traveling pilot (Reynolds), who has crash landed after being pursued by the agents of the villainous Maya Sorian (Catherine Keener, Get Out, Being John Malkovich). The pilot hides out in the old garage/workspace that belonged to Adam’s late father, who was killed in a car accident in 2018. The pilot knows every inch of the garage and the yard surprisingly well. He seems familiar to Adam, and not just because he’s played by Reynolds: He is the future Adam Reed, who is on a mission to find his wife, Laura (Zoe Saldaña), and save the world of the future from Sorian. Together, the two Adams must travel to the past to find the one person who can help them stop Sorian and save the future: their late father, Louis Reed (Mark Ruffalo).

The Adam Project is the kind of film that relies heavily on nostalgia for the better films that inspired it, and whether you find it to be a clever invocation of the blockbusters of yore or a pale rehash will largely depend on the individual viewer. Levy is a frequently maligned director who specializes in both imitation and light, family fare, and for my money he’s received entirely too much online venom for simply being a capable studio director who knows what he’s good at and when to stay the course.

The Adam Project is far from a groundbreaking new classic, yet it succeeds at what it sets out to be: a wildly entertaining and action packed family movie with a lot of heart. Reynolds is at his most likable in the role of “Big Adam”, and the chemistry and comedic timing Reynolds achieves with newcomer Scobell as his younger self is both impressive and infectiously fun. Scobbell perfectly captures the patented Reynolds sarcastic banter and attitude and easily carries The Adam Project on his tiny shoulders, even when Reynolds isn’t on screen. It doesn’t hurt that the duo have so much backup in the form of an all star cast that includes the re-teaming of 13 Going On 30 stars Garner and Ruffalo, as well as Saldaña, the patron saint of 2000s pop sci-fi.

For me, the most problematic element of Levy’s direction for The Adam Project is his frequent use of bouncy songs that rarely feel particularly motivated by what’s going on in the film and don’t belong to any of the various timelines. It’s the same indulgence that JJ Abrams has overdone in all of his non-Star Wars films, though it’s less distracting than it should be most of the time, and Levy’s strong sense of pacing and visual expertise outweighed my annoyance of the self-indulgent choice. Levy makes numerous references, both visually and tonally, to films such as E.T. and Back To The Future, and as someone who was as influenced by that era of film as Levy was, I couldn’t help but eat it up with glee.

The Adam Project is a can’t-miss event of family fun that doesn’t even require you to leave the house. It’s not going to be on any top ten lists, but it gave me exactly what I wanted. It was the film that finally cemented Reynolds as both a star and producer who can make me excited about nearly everything. Don’t overthink this one, just enjoy it. –Patrick Gibbs