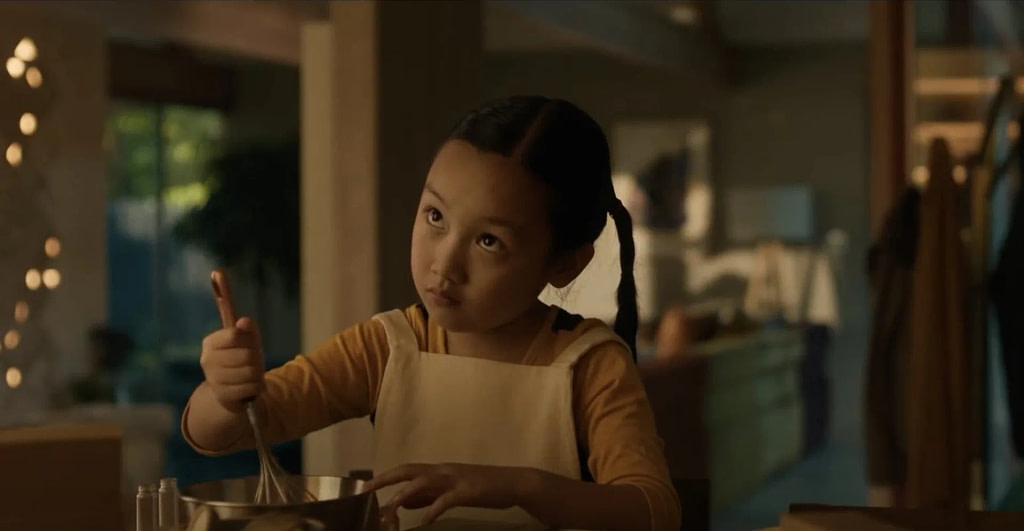 Malea Emma Tjandrawidjaja is busy fielding offers and working on big projects down the line, but the charming and talented star insists that she’s still very much the same person she was before, apart from life changing development: watching herself on TV is “really cool.”

If you went to the movies this past weekend, you probably saw The Batman this past weekend, and like everyone else, are talking about Colin Farrell‘s stunning performance. But it wasn’t the only option out there for Farrell fans. The science fiction drama After Yang, which premiered to great acclaim at Sundance Film Festival 2022,  hit theaters and streaming on Showtime on March 4, and one such Farrell fan is his remarkable 10-year old co-star, actress Malea Emma Tjandrawidjaja.

“I knew of Colin Farrell because I watched his movie, Dumbo,” Tjandrawidjaja explains. “So I was just really happy that I got to work with him … he was so nice that you thought he was just a normal friend that you talk to every day.” While Farrell plays the lead role in After Yang, it may be Tjandrawidjaja who is leaving audiences with a longer lasting impression.

After Yang centers around a couple (Farrell and Jodie Turner-Smith) and their adopted daughter, Mika, played by Tjandrawidjaja.

Mika has one sibling, her brother Yang (Justin H. Min). Yang is actually an A.I. who was purchased by the family—when Yang suddenly breaks down, so does Mika, who has lost so much more than a robot playmate.

“I think that Mika, in a sense, knew that he wasn’t really her brother,” Tjandrawidjaja says. “But she’s grown up with him, and I think she’s thought of him not only as a brother but also as a friend …  She truly felt a connection with him.”

Tjandrawidjaja, an Indonesian-American from Los Angeles, has been performing for nearly her entire life, but it was in 2018 when she first started to get noticed in a big way. Tjandrawidjaja’s powerhouse rendition of the National Anthem at an LA Galaxy Game went viral. It landed her jobs doing national commercials for Amazon, Jeep and others, even the chance to play Molly in the musical Annie at the Hollywood Bowl. The video also caught the attention of acclaimed director Kogonada.

“Singing is acting, because when you’re singing you have to act like you feel the song.”

“Koganada met up with me and my family, and we talked a lot about the movie, and we just talked a lot in general,” Tjandrawidjaja says She quickly fell in love with the story and auditioned for the director. “Then a few months later he called us and told us that I had booked the job,” she says.

Tjandrawidjaja had a lot of experience for someone so young, but working on After Yang proved to be an adjustment for her. “I’ve always been doing very over-the-top acting, where I make it very obvious and super energetic, “Tjandrawidjaja says. “But then Kogonanda actually told me that in some movies, to make it more natural, you have to tone it down a little bit.”  Tjandrawidjaja has since appeared on the Disney Channel on shows such as Coop and Cami Ask The World and Raven’s Home, as well as the Nickelodeon hit iCarly. But After Yang has remained a singular experience for her as an actress. “It’s a very still movie where you have to be really in the zone, and you have to make everything very natural and quiet,” Tjandrawidjaja says.

In addition to her increasingly prolific acting career, Tjandrawidjaja has made  a mark for herself as a singer in the past  five years. The young rising star performed with Tony and Grammy winner Jennifer Holliday on Good Morning America and was even invited to audition on American Idol, where she was awarded with a golden ticket—even though she was too young to compete.

“It’s a very still movie where you have to be really in the zone, and you have to make everything very natural and quiet,”

When it comes to choosing between focusing on acting or singing, Tjandrawidjaja doesn’t see any need to do so. “I can’t really choose, to be honest, “ Tjandrawidjaja  says.  “Singing is acting, because when you’re singing you have to act like you feel the song.” Tjandrawidjaja‘s ultimate goal is a career on Broadway and musical films.

Despite an increasing fandom and already successful career, Tjandrawidjaja remains remarkably grounded. She  points to Colin Farrell as a positive influence in this regard. “He’s a very successful person, but he’s also very very humble, and he’s very down to earth. I think that’s also something that I could learn from him,” Tjandrawidjaja says.

Malea Emma Tjandrawidjaja is busy fielding offers and working on big projects down the line, but the charming and talented star insists that she’s still very much the same person she was before, apart from life changing development: watching herself on TV is “really cool.” You can watch After Yang in theaters or streaming on Showtime and see Malea online @maleaemma on Instagram, YouTube and Twitter, as well as her website, maleaemma.com.