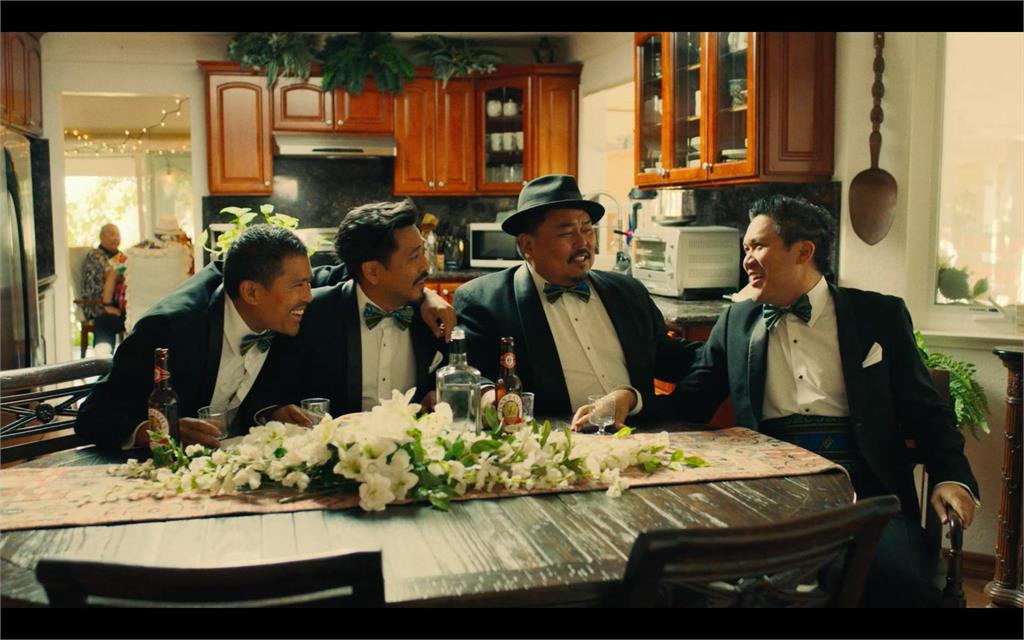 This past December, Steven Spielberg’s Hook turned 30 years old. This was a reminder for many of us that we don’t live in Neverland, and we all must grow up. For actor Dante Basco, who played the leader of the Lost Boys, Rufio, growing up has meant moving from in front of the camera to sitting in the director’s chair.

The Fabulous Filipino Brothers premiered in 2021 at the SXSW Film Festival and just made its streaming debut on February 8. Directed by Dante Basco, who co-wrote along with his sister Arianna Basco—who also serves as the film’s narrator—and his brother Darion Basco, this comedy tells the story of four brothers, played by Basco and his real-life brothers, Derek, Dionysio and Darion Basco.

It’s very unique for a real family of actors to come together and act in a film. And then for us to go back to our home town and shoot it there, 35 years later, is pretty amazing … it’s really kind of touching to me to see some of our actual history on screen.”

“I love these guys. … I wanted to show the world, show Hollywood, this is what these guys can actually do,” Basco says. The actor-turned-director has been performing with family his entire life, beginning with a breakdancing group the brothers formed as kids living in Pittsburgh, California. While Basco has certainly achieved the highest profile due to his role in Hook (as well as voicing Prince Zuko in Avatar: The Last Airbender), the Basco brothers have all worked prolifically in film since the ’90s, and each attended the Orange County School of the Arts in the music and theatre conservatory together.

The Fabulous Filipino Brothers is centered around the Abasta boys: Dayo (Derek), Duke (Dante), David (Dionysio), and Danny Boy (Darion) are back together as the large family prepares for a wedding. The film plays out as a series of episodic vignettes, with each brother spotlit in their own segment. “We really set out to write these things inspired by true stories in our lives,” Basco says. “It’s very unique for a real family of actors to come together and act in a film. And then for us to go back to our home town and shoot it there, 35 years later, is pretty amazing … it’s really kind of touching to me to see some of our actual history on screen.”

While Basco calls himself a “lifer” when it comes to performing and Hollywood (and has had some experience with producing and even writing), he’s always primarily considered himself an actor. “As a little breakdancing kid, or even when I was acting, I never thought ‘I’m gonna direct some day,’” Basco says. He fondly remembers his experience on Hook, showing up on set even on his days off just to watch Robin Williams and Dustin Hoffman perform. “I was also sitting next to Steven Spielberg the whole time,” Basco says with a wistful smile. “And Steven was telling me about directing, telling me about camera movement and telling me about lenses and lighting … all that stuff makes a big impact on a young actor.”

The Fabulous Filipino Brothers was a chance to truly realize the impact of that experience with the added challenge of directing himself in one of the lead performances. Basco credits his brothers Darion and Dionysio  as they came along with him to the Philippines where Duke’s plotline takes place. Basco was able to rely on his brothers for additional direction and suggestions so he could concentrate on the story of reconnecting with an old flame, played by Solenn Heussaff. “I really relied on my brothers’ eyes.”

Co-writer Arianna, Basco’s sister, was also integral to the process of adapting real characters and situations from the Basco family history to the screen.. It’s a comedy, it should be fun and it’s really entertaining, but we also collectively know all the stories that we’re pulling from and the people that we’re talking about and referencing in our life, and so it could be sensitive matters, So it was really important for me to get everybody involved and on the same page about it, who we’re talking about, how we’re talking about everybody.

Now that Basco has his directorial debut under his belt with The Fabulous Filipino Brothers, he is working on new projects, including starring in a romantic comedy and, possibly, directing a dance film. But Basco’s not done working with his family, and there’s even talk of bringing the Abasta brothers to television. Whether that happens or not, it’s safe to say that these boys are far from lost, and the Bangarang Basco brothers will be performing together again before we know it.