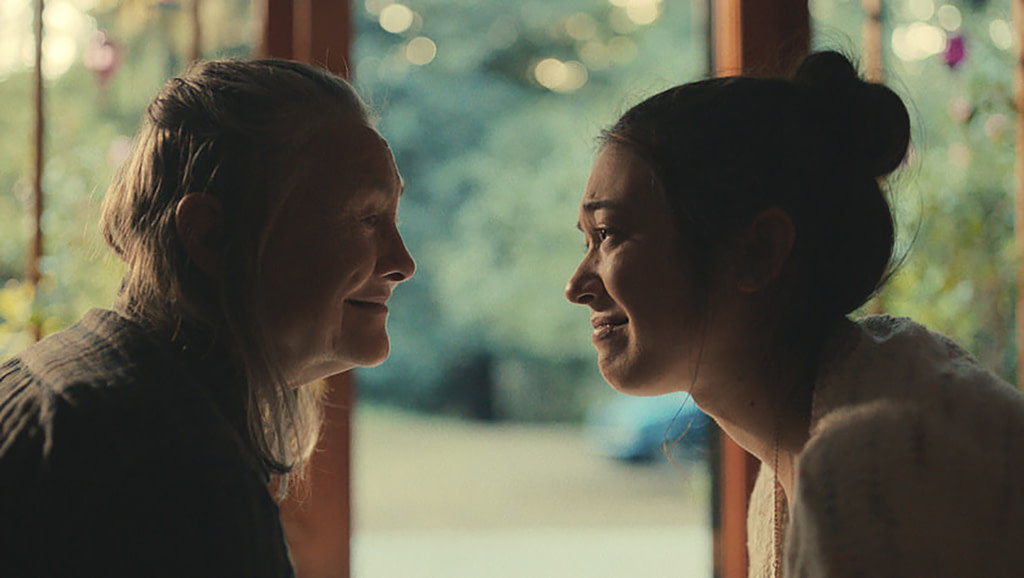 Photo Courtesy of A24 and AppleTV+

Josephine Decker and Grace Kaufman Talk The Sky Is Everywhere

It’s Valentine’s Day again, which means romantic movies are in full bloom. If you’re looking to pick something out of the ordinary, consider The Sky is Everywhere, the new film adapted from the young adult novel by Jandy Nelson. The beloved tale is brought to the screen by director Josephine Walker and stars actress Grace Kaufman.

The Sky is Everywhere follows Lennie Walker (Kaufman), a talented, aspiring musician who lives among the towering redwood trees of Northern California along with her gram (Cherry Jones) and her beloved older sister, Bailey. When Bailey suffers a fatal heart arrhythmia, Lennie struggles with overwhelming grief over the sudden and tragic loss, and she’s not alone: Bailey’s distraught boyfriend, Toby (Pico Alexander, Dickinson) spends all of his time hanging out at the house, and Lennie finds herself bonding with him over their shared pain. Lennie also finds a distraction in the form of Joe Fontaine (Jacques Colimon, Nocturne, The Society), the new guy at school. Joe is a charismatic fellow musician, and Lennie is instantly drawn to him. But her complicated and often confusing relationship with Toby starts to affect Lennie and Joe’s budding romance.

Josephine Walker, who previously directed Shirley and Thou Wast Mild and Lovely, found herself irresistibly drawn to the material. “I was immediately in love with the world, it’s very magical,” she says. The Sky is Everywhere is seen through the mind’s eye of its protagonist, Lennie, adding an element of magical surrealism and imagination. It’s also a deeply emotional journey, which Decker found to be perfectly suited to her. “The fall that I found the script, I was in a really happy place. I was in love, and I was like, ‘I need this script, I wanna make a joy movie,’” Decker says. But when Decker found herself going through a personal tragedy, the script took on new meaning for her. “The fact that it could hold both those things in totally different moments of my life, it really told me that this was a special project that I hoped would speak to a wide range of experiences for any audience.”

Grace Kaufman, known for her role on the Matt LeBlanc sitcom Man with a Plan, felt lucky to have the opportunity to make this film in 2020 when roles were scarce and isolation and uncertainty were themes that she found to be easy to draw upon. “Getting to be up in this beautiful setting among these beautiful, gigantic redwood trees with some really amazing people, was really rewarding, “ Kaufman says. “I also feel like I treated the experience kind of like therapy because there’s so many emotions that explored throughout the movie, and I think I just channeled a lot of my anger, my sadness, my grief, my excitement … in my life that I had been feeling over the course of 2020, into the role … I felt like I had an outlet to get all that stuff out.”

The music’s importance to the story proved both an obstacle and a bonus for the 19-year-old actress, as Grace plays first-chair clarinet and is preparing to apply to go to music school  “For about three months before we started filming, I had to learn a new instrument,” Kaufman says. “I had a blast, even though it was a little scary.”

The Sky is Everywhere proved to be a balancing act for both actor and director because of the film’s wide range of emotions, and Decker admits that it was daunting at times. “The tonal balance of the film, the balance of the grief aspect and the joy, was one of the most challenging parts,” Decker says. “On the page it works great. Just like in a novel, you go into a really dark moment then go into a really light moment. It’s all part of the same subjectivity.”

In adapting the novel to film, Decker found that there were many more elements at play, including the actors’ performances and the music. The shifts from darkness to light required a bold and delicate approach to storytelling. “We were really trying to be true to the script’s comedy and playfulness while also making sure that the audience believed in Lennie’s loss and believed her grief,” Decker says.

The Sky is Everywhere is a remarkable story of love in all its forms, the heartache that comes with it and the strength that it gives us even as it threatens to tear us apart. The film is streaming now on AppleTV+, so whether you’re looking to cuddle up on the couch with that special someone or you find yourself alone needing a good cry, The Sky Is Everywhere has something for almost everyone on this ultimate holiday of conflicting emotions.