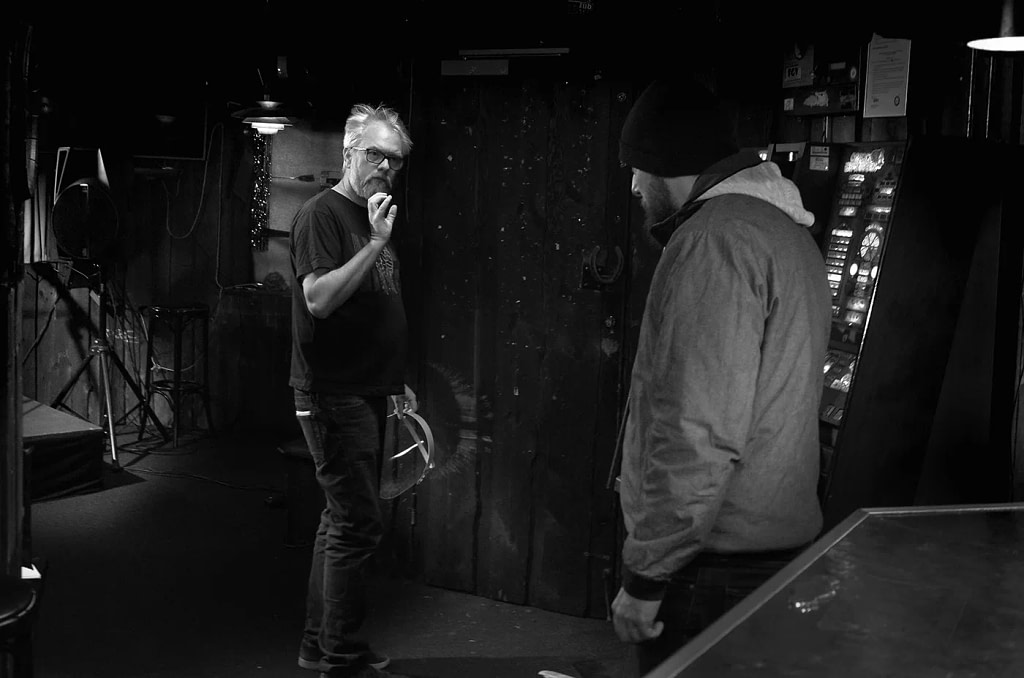 Martin Strange-Hansen directs Rasmus Hammerich in what happens when his character sees the mic. Photo Courtesy of Benoza Films and M & M Productions.

Oscar Nominee Martin Strange-Hansen Has A Lot On His Mind

“A guy walks into a bar… “ That’s the opening line of countless jokes, but for Danish filmmaker Martin Strange-Hansen, it’s not only the starting point for his Oscar nominated short film On My Mind, it’s a moment from his life he will never forget.

On Mind My Mind follows Henrik (Rasmus Hammerich, Elves), a disheveled stranger who enters a closed bar early one morning. Henrik talks the bartender (Camilla Bendix) into selling him a drink, and upon seeing the karaoke machine, he begs for the chance to sing just one song, Always On My Mind by WIllie Nelson. The owner (Ole Boisen) just wants this weird man to leave, but Henrik is determined to sing, and as the story unfolds, we learn the heartbreaking reason for the request: Henrik’s wife lies in a coma, dying. He wants to sing the song, dedicate it to his wife, and play a recording of it to her before he lets the doctors turn off her life support systems. It’s a powerful premise for a film, one that was inspired by an experience in the writer/director’s life when his not-yet two-year-old daughter was in the hospital dying of spinal muscular atrophy.

“Because of when we did the film and where the film stems from, it’s a personal story for me … ”

“We had this very severe moment where I knew tomorrow we are going to have this very important meeting with the doctors,” Strange-Hansen says. “ And I haven’t been able to sleep for weeks. So I need something to calm me down. And what do I do? I go out of the hospital, and I walk down the street in my long, gloomy mood.” Strange-Hansen ordered a double whiskey, downing it in one gulp. It was then that he noticed the two men sitting at the bar only a few stools away. They had a few drinks, and they were laughing and having a nonsensical conversation about tying a rope around the globe. “I thought, ‘Okay, I can sit here, and I am so much in my own pain, and these two guys… they are in another world,’” Strange-Hansen says, noting the surreal nature of the moment. “That feeling really kind of stuck with me.”

It was during the early days of the COVID-19 lockdown that Strange-Hansen decided to make On My Mind, inspired by his own painful experience and by the kind of practical considerations that are everything to a filmmaker on a limited budget. “I had this idea that, because of [COVID], ‘Hey, I can be in a bar for free. They are all locked,’” Strange-Hansen says. “And I have this story about a guy who wants to sing a song. So I connected those two thoughts.”

On My Mind is a strong contender to get Strange-Hansen his third Academy Award—he won the Oscar for Best Live Action Short in 2003 for This Charming Man, a mere two years after winning a Student Academy Award for his graduation film, Feeding Desire. While the filmmaker admits that being nominated again brings back a lot of memories, he also feels that in many ways, it’s a different experience this time. “Because of when we did the film and where the film stems from, it’s a personal story for me,” Strange-Hansen says. “So in many ways, I have a deeper, more profound sense of joy and excitement about this. And I think that every time that you’re here, if you experience it more than once, that it will be like the first time.”

“I had this idea that, because of [COVID], ‘Hey, I can be in a bar for free. They are all locked.’ And I have this story about a guy who wants to sing a song. So I connected those two thoughts.”

Strange-Hansen has passion for short films and believes the medium is a frequently misunderstood artform. “We do often think of it as something you do along the way,” Stange-Hansen says. “But it’s not like, ‘Yeah, I want to make a feature, so I’m making a short that proves that I can make a feature… I think it’s the story that, in a way, defines what you’re doing,” Strange-Hansen says. The director believes the economical nature of storytelling in a short film makes it more difficult and, in turn, more rewarding. He postulates that the ability to make a great film that tells a meaningful story in such a compressed time is specific and challenging, and if anything, filmmakers should start with features and work their way up to shorts.

When the list of nominees for Best Live Action Short Film at the 94th Academy Awards are read, the moment will not be televised. Due to the controversial decision to streamline the broadcast. it’s one of several categories wherein only the winner’s speech will be seen. But regardless of decisions made for the sake of rating, On My Mind is a singular achievement to be celebrated and, above all, seen and experienced. Strange-Hansen is an artist whose talent and vision continue to leave a mark, not just in Denmark, but everywhere in the filmmaking world, because Martin always has a good story on his mind. – Patrick Gibbs