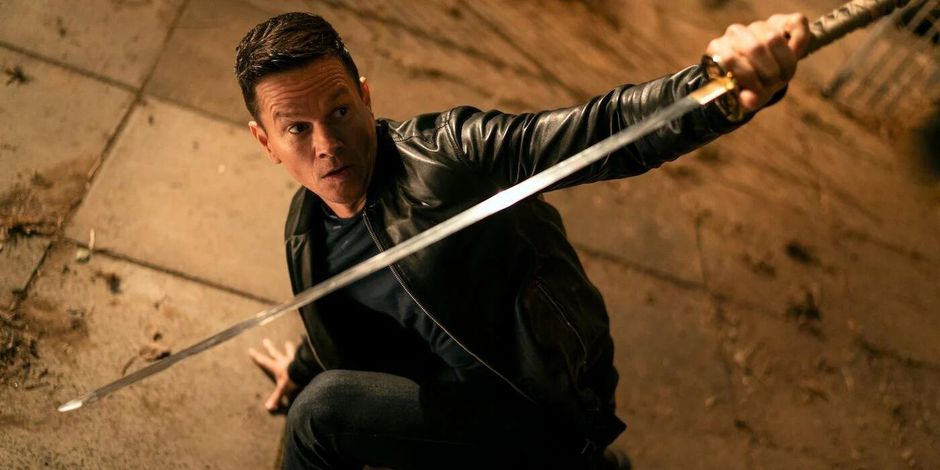 For Evan McCauley (Mark Wahlberg, The Departed, Patriot’s Day), skills he has never learned and memories of places he has never visited haunt his daily life. Evan was diagnosed as schizophrenic at age 14 after he carved the words “Look Inside” on his own abdomen, and has been in and out of various facilities and dealt with more than his share of unpleasant episodes and troubles. We first meet him, Evan is on the brink of a breakdown, between jobs and getting by by doing things like forcedly handcrafting a samurai sword for a gangster in exchange for black-market meds—I think most of us have done that one time or another—but he has no idea how he’s going to pay this month’s rent because his closed-minded landlord apparently doesn’t recognize ancient Japanese weaponry as a form of currency.

Evan is sought by a secret group that call themselves “Infinites,” revealing to him that his memories may be real—but they are from multiple past lives. The Infinites bring Evan into their extraordinary world, where a gifted few are given the ability to be reborn with their memories and knowledge accumulated over centuries. With critical secrets buried in his past, Evan must work with the Infinites to unlock the answers in his memories in a race against time to save humanity from one of their own (Chiwetel Ejiofor, Doctor Strange, Locked Down), who seeks to end all life to stop what he views as the cursed, endless cycle of reincarnation.

Infinite is clearly hoping to be a mind-bending action spectacular in the tradition of The Matrix, but the most interesting thing about the alternate world in which the film takes place is that it’s one where Wahlberg can more or less act but, somehow, Ejiofir cannot. Admittedly, that did blow me away. The phenomenally talented star of 12 Years A Slave has always seemed incapable of giving a bad performance, but the only way I describe the choice of characterization is that it comes as if he’s playing Don John from Much Ado About Nothing and has been asked to incorporate elements of Hugo Weaving, Bela Lugosi and Daffy Duck.

It’s also dumbfounding that a major Hollywood film would use serious mental illness issues as such a cheap jumping-off point for an idiotic sci-fi plot in this day and age. If I’m being honest, I’ve never been entirely comfortable with the lack of sensitivity with which Fight Club approaches the subject of living with schizophrenia, but at least it does so with some degree of intelligence. Infinite romanticizes, mischaracterizes and glorifies the issue in ways that are beyond irresponsible.

Wahlberg does well enough at the action and has a serviceable movie-star presence. But even he doesn’t feel too strongly engaged in what’s going on. Sophie Cookson, who made a strong impression in Kingsman: The Secret Service, is given no personality in her role as the Trinity-esque character who pulls McCauley into this mess.

Fuqua does serve up some impressive, testosterone-fueled action-set pieces, but to paraphrase Frank Barone from Everybody Loves Raymond, I could have eaten a box of Alpha Bits and crapped a better script than this. The Reincarnationist Papers, a novel by D. Eric Maikranz, serves as the basis for the screen story by Todd Stein and screenplay by Ian Schorr, the latter of whom wrote for the Training Day television series. It all adds up to a lot of frenzied doubletalk and ill-conceived attempts at storytelling that barely string together and make for a lot of incoherent nonsense that is too simplistic to be called confusing but too utterly silly to go with even a moment.

While Wahberg, the producer and star, and Fuqua, the director, were reportedly not too thrilled with the choice to move their film to streaming and not play it in theaters, if anything, Paramount is doing them a favor by allowing Infinite to perhaps be a minor selling point for Paramount+ rather than a colossal bomb on the big screen. Either way, Infinite is going to be remembered as one of 2021’s dumbest big-budget major releases and the first big Razzie contender of the year. The only big benefactors from Infinite will be Justin Lin and Vin Diesel, because it makes one look forward to F9 for more a cerebral action alternative. –Patrick Gibbs