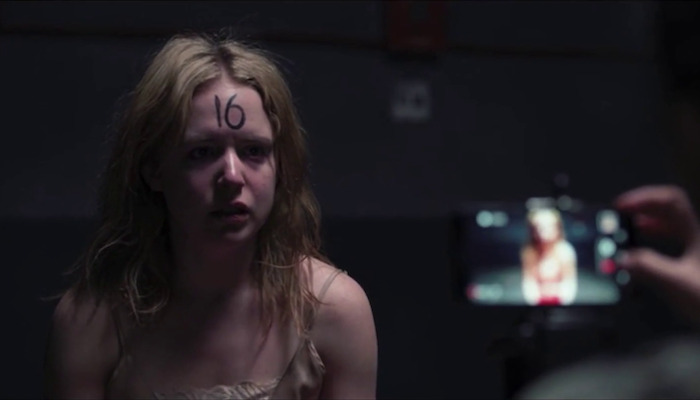 It’s not easy to make a movie that feels ripped from the headlines and frighteningly plausible yet still manages to have nothing of interest to say. But writer-director Michel Franco (April’s Daughter, Chronic) has done exactly that with New Order. It’s an attempted reflection of society and the tension between the haves and the have-nots.

New Order takes place in Mexico in the present day, as the gap between social classes is increasingly marked. While protests rage in the streets, Marianne (Naian González Norvind, South Mountain, The Devil You Know) and her high-society family prepare for her wedding, Rolando (Eligio Meléndez, Dark Desire)—a former employee of the family—shows up seeking money for an emergency surgery for his wife. While Marianne’s brother, Daniel (Diego Boneta, Rock of Ages, Terminator: Dark Fate) reacts with incredulity and disgust, Marianne shows compassion and is determined to help.

Soon, the wedding is interrupted by a group of armed and violent rioters who are part of an even larger uprising of the underprivileged. They take the participants as hostages amid a swift disintegration of law and order based on class difference. The government then retaliates as the Mexican army uses the disorder caused by the riots to establish a military dictatorship in the country.

Franco’s film is certainly topical, and it starts off promisingly, with the contrast of the lavish decadence to what’s going on outside and the chilling obliviousness of the majority of the wedding party is effective. Marianne is also a promising character. The tension buildup to the moment when all hell breaks loose is palpable, but when the violence does come, that’s pretty much it. New Order is just nonstop on the spot executions, rapes and other mayhem for over half of its runtime, without bothering to delve into serious issues or to try to make any kind of sociopolitical statement or even much of a human one.

The film presents a plausible depiction of where polarization and apathy are leading the world, and it’s a sobering view of where we could end up, but without any exploration of ideologies, humanity or even suggestions as simple as “maybe we need to have a serious talk about this.” By no means did I want to see an easy solution or a lot of cornball speeches from political figures about how we should have listened before it was too late, but Franco is so focused on portraying the brutality without compromising his vision that he loses sight of why.

New Order becomes an exercise in pushing boundaries in terms of shocking content. Franco, the screenwriter, hasn’t given Franco, the skilled director, a workable narrative to build from, and instead leaves him flailing and fixated on voyeurism, as opposed to putting us in the action the way a director like Paul Greengrass would. It feels oddly detached even as we are seeing these horrific things taking place.

The acting is good, with González Norvind giving a particularly strong performance, but New Order becomes so unfocused that all characters literally become lost in the action. The loss of feeling that the story has any protagonists, antagonists or even a solid viewpoint left me frustrated at first, then just bored by the tedious self-indulgence of it all. The cinematography, by Yves Cape (Violette, The Nun) is effective, going for a stark, realistic style. On a technical level, everything about the film is well done, but it plays like a story told on a long drive but someone who is trying to stay awake and forgets the point they were originally trying to make.

New Order is an unfortunate failure that is based around pertinent issues, but no, there is literally nothing to take away from it except what you came in with. Whether you believe that socialism, fascism or just good old-fashioned, heartless capitalist business as usual is the answer, New Order will leave you just as certain that you are right and that everyone else is wrong. I believe the inevitable conclusion of the viewer may be that this is all too unpleasant to think about, so let’s just try not to think about it. And that may be the least helpful message we could possibly get from a motion picture right now. –Patrick Gibbs