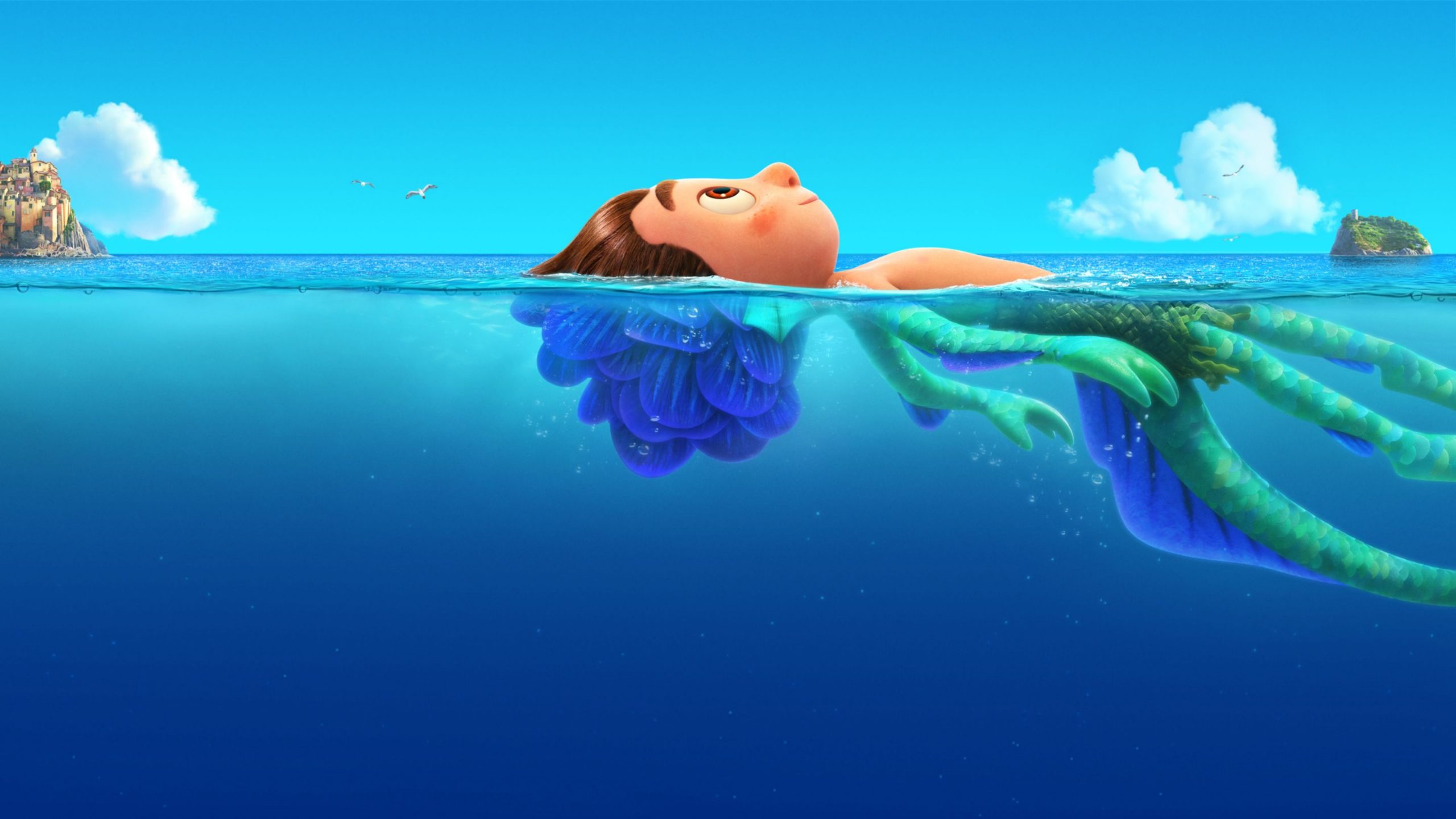 2021 has already been a pretty strong year for animated films, with the best so far being Disney’s Raya and the Last Dragon, a movie that said that yes, Disney can still surprise us. And The Mitchells vs. The Machines practically screams “Disney and Pixar are no longer a forgone conclusion for Oscar gold!” But Pixar’s big entry for the year, Luca, is finally here, and what it has to say is simple and to the point: “We are still Pixar.”

Luca is a young sea monster (voiced by Jacob Tremblay, Room, Wonder) who lives in the waters near the Italian coast, herding goatfish with his parents. Although he’s been warned his whole life that the human world is a dangerous place, he longs for something beyond his quiet farm life, but then he meets Alberto (Jack Dylan Grazer, It, Shazam!), a spirited boy who spends most of his time living on land in human form. Together with Alberto, Luca travels above the surface to the seaside town of Portorosso on the Riviera, where they befriend a spunky human girl named Giullia who has an adventurous spirit and a love for books and learning. Luca’s eyes are opened to a world of possibilities, and the trio enjoys a series of misadventures, run afoul of the town bully and share their hopes and dreams. All the while, Luca and Alberto try to keep their true identities secret from a town where legends of sea monsters are not taken lightly.

Director Enrico Casarosa (La Luna) has created a tale that overflows with charm, atmosphere and the joys of friendship and discovery. The screenplay by Mike Jones (Soul) and Jesse Andrews (Me, Earl and the Dying Girl) is smart, sweet and funny. The musical score by Dan Romer (Beasts of the Southern Wild, Wendy) infuses Luca with a sumptuous and authentic sound that recalls classic Italian films.

The 1950s setting is captured beautifully with touches ranging from the gramophone that Luca and Alberto love so much to a poster of Gregory Peck and Audrey Hepburn in Roman Holiday that can be seen in the background in one sequence. This isn’t the only loving reference to innate cinematic quality of Italy. Astute movie fans may remember The Godfather and Luca Brasi, who “sleeps with the fishes.”

The voice cast is really something special. Tremblay and Grazier are two of the most gifted and charming actors of any age working today. Maya Rudolph and Jim Gaffigan are quite amusing as Luca’s well-meaning but clueless parents, Daniella and Lorezo, respectively. Emma Berman (Go! Go! Cory Carson) is lovable as Giullia. Marco Carricelli (Holy Silence) and Saverio Raimondo as the bully, Ercole, add to the flavor and are quite delightful.

Because Luca’s lead characters are children, there’s some potential for it to get labeled a kiddie movie. While my 5-year-old nephew, Timmy, did enjoy the fact that there were kids in it, Luca definitely falls into the category of being at least as much for anyone who was once a child as those who are currently, if not more so. It may not be Pixar at it’s laugh-out-loud funniest or its most action packed, but Luca has an enchanting, lyrical quality to it that I wouldn’t trade for either of those things.

Luca is engaging and extremely entertaining from beginning to end, and I felt transported by it, both to Italy and to my childhood. It’s a coming-of-age story that evokes the spirit of some sophisticated works, ranging from Stand By Me and yes, even Call Me By Your Name—albeit strictly platonically—to some of the films of Federico Fillini and Hiyao Miyazaki. Luca is a beautiful and wondrous film for the whole family, and it’s easily going to be one the biggest standouts of the summer moviegoing season. While it may be playing at home instead of the theaters, this is a movie that will make you feel like you’ve gone somewhere special and had a grand experience. –Patrick Gibbs