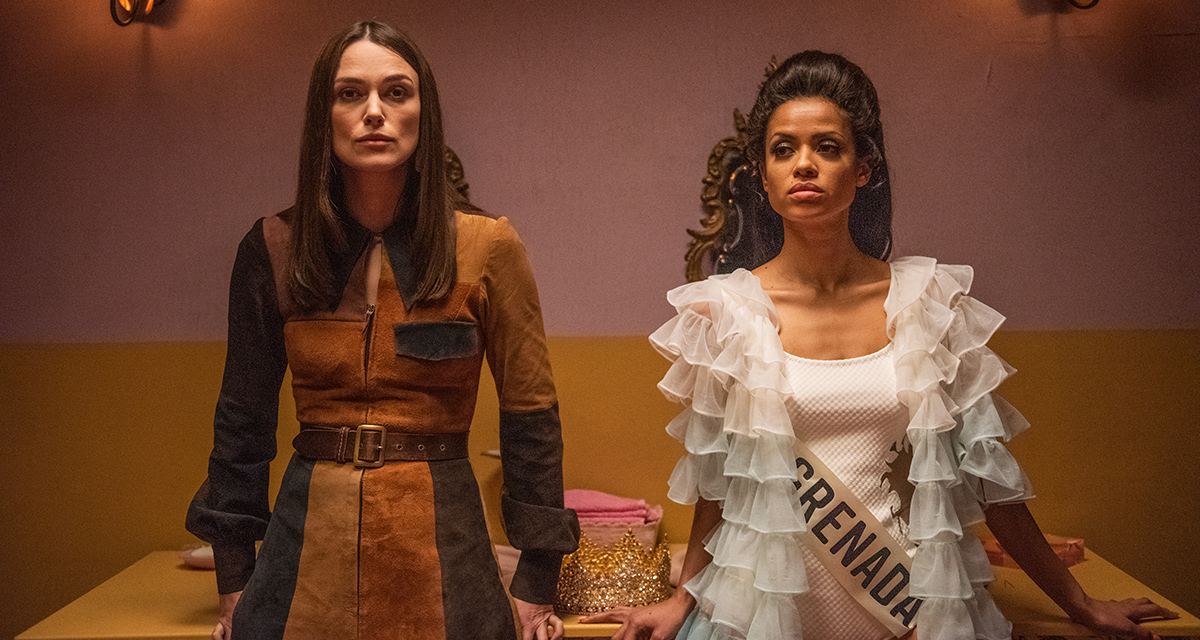 The issue of feminism is one that is very personal and very important to me; I could go on for pages about the things that made me into a feminist without ever getting to talking about the film at hand. But I’m not going to do that, because director Philippa Lowthorpe’s fact-based new film Misbehaviour really speaks for itself.

Sally Alexander (Keira Knightley), is juggling single motherhood while becoming heavily involved in activism surrounding the growing Women’s Liberation movement in London when she falls with a group of seemingly fearless young rebels, including the brash Jo Robinson (Jessie Buckley, I’m Thinking of Ending Things). The group decides that the 1970 Miss World Competition, with its objectification of women, is the perfect event to draw attention to their cause on the world stage.

The show is getting a lot of attention, both for the return of Bob Hope (Greg Kinnear) as host for the first time in 10 years, and for the controversy surrounding the participation of South Africa at a time when outrage over the apartheid system is felt around the world. As the contest approaches, the contestants begin to arrive, including Miss United States (Suki Waterhouse, Mad Max: Fury Road), Miss Sweden (Clara Rosager, Before the Frost) and the first ever Miss Grenada (Gugu Mbatha-Raw, Summerland). Also to arrive is Hope and his wife Dolores (Lesley Manville, Phantom Thread), the latter still harboring resentment toward her husband over his involvement with the winner of the 1961 pageant. The tension begins to mount on all fronts as the night of the big event finally arrives.

Lowthorpe (Call The Midwife, The Crown) does a great job at the helm, and she’s given a lot to work with in the excellent screenplay by Rebecca Frayn and Gaby Chiappe. Knightley, a gifted actress and one of the great movie stars of the past 20 years, makes a stellar protagonist in part because she’s smart enough to know when to share the screen with her co-stars—the pairing of Knightley and the exquisite Buckley as an unlikely duo united by a cause is sheer perfection. Mbatha-Raw, here playing Grenada’s Jennifer Hosten, is really the third lead. She’s rarely given material that is worthy of her in  other films, and Misbehaviour one of her best roles since her big discovery in Belle.

Kinnear makes a terrific Bob Hope in a portrayal that is less than flattering but very fair. But Manville’s Dolores blows him off the screen in every scene they share together, and it’s a performance that should be getting a lot more buzz. I have a minor complaint with the fact that the script has Dolores referring to her husband by his professional name, Bob, even in private, when Hollywood history and comedy buffs like myself know full well that she and others close to him called him by his given name, Les. But this is a minor criticism, and something in Manville’s delivery almost makes it play as a layered and deliberate choice, even if it wasn’t one.

Misbehaviour is in some ways a formulaic, feel-good film, but it’s one that is full of nuance, intelligence and biting wit. I was frankly amazed at how deep it goes in examining different sides of the issue of women at the center of unjust treatment, celebrating the cause of the women’s libbers without ever throwing other women under the bus. The film presents some illuminating, and, at times, painful insights, both with the contestants and the complex relationship between Sally and her conservative mother, Evelyn (Phyllis Logan, Secrets & Lies), a character who could have easily been a one-note semi-villain—she probably would have if the film had been written and directed by men.

Misbehaviour emerges as one of the biggest winners of the fall, crowned in glory and ready to take on the world. It’s an inspirational, moving and thoroughly entertaining film, and is more than an equal to anything currently playing in theaters. –Patrick Gibbs