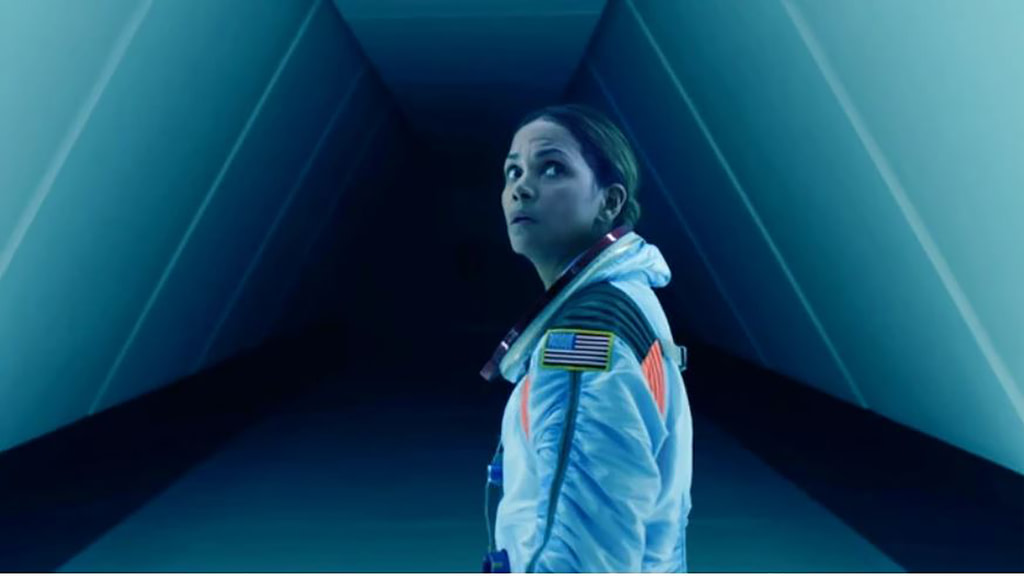 I remember when Roland Emmerich first arrived as a major Hollywood presence, shamelessly imitating Steven Spielberg, Irwin Allen and more, but having so much fun doing it that it was hard not to share in that sense of fun. Moonfall signals Emmerich finally reaching a landmark stage in his career: Now the primary cinematic influence he’s trying to imitate is himself.

A mysterious force somehow knocks the Moon from its orbit around Earth and sends it hurtling on a collision course with our planet, threatening to end all life as we know it. Jo Fowler (Halle Berry), a top-tier executive at NASA, has to come up with a plan, and fast. But the key to that plan turns out to be Brian Harper (Patrick Wilson, The Conjuring, Midway), a disgraced former astronaut who saved Fowler’s life during the same moon mission that ended his career and got her promoted. Together with K.C. Houseman (John Bradley, Game of Thrones) a lovable and knowledgeable conspiracy theorist (easily the least true-to-life concept in the film), Fowler and Harper must put the past behind them in order to save the future, which means heading back to the moon.

Moonfall ranks among Emmerich’s stupidest films, which is not that same as being one of his worst. Yes, the plotline is even more preposterous than you would imagine, and the characters are paper-thin variations on old Emmerich standards. The dialogue ranges from melodramatic cliches to hilariously dopey B movie pseudo-science, and the supporting performances are uniformly weak at best. But Emmerich is at his worst when he is either out of his element (Anonymous) or phoning it in (Independence Day: Resurgence), and he’s solidly in his territory and having a good time with with Moonfall, even if it never rises above playing like reheated leftovers.

Of the main cast, Berry fares best, mostly because she’s so used to working her way through bad scripts at this point that it’s become second nature. Wilson is a capable actor given the right material, and I really wanted to see this film that finally cemented him as a viable leading man. Too often here, his awareness of just how wooden and dorky his lines are comes through. Bradley is fine, though he’s never as endearing as Emmerich wants him to be, and Michael Peña (Ant-Man) is shamefully underused as Brian’s wife’s ex-husband. The film might have been improved on multiple levels if Peña and Wilson had simply switched roles.

While Moonfall just gets stupider as it goes (surpassing even Armageddon on the “you’ve gotta be kidding me” scale of astronaut movies), the further it falls into off-the-charts idiocy, the harder it gets not to have a bit of fun with the proceedings. Emmerich seems to be deliberately trying to make a salute to ’90s blockbusters. As if he’s trying to recreate the laugh he got in the original Independence Day when Jeff Goldblum repeats one of his Jurassic Park lines, the director works in lifting snippets of dialogue from movies ranging between The Lost World and Crimson Tide and otherwise references many other  hits from the era, including his own. A lot of these bits fall flat, and the sense of nostalgia for the popcorn movies of that decade is felt most when Moonfall is just focusing on being that type of movie instead of trying to be all of them at once. It’s definitely a bit bloated at 130 minutes, especially given how little you care about any of these characters,and it takes way too long to hit its stride. That said, when Moonfall manages to fall into a groove, there’s plenty of “turn off your brain” entertainment value.

Moonfall is at best a fun movie, certainly not a good one, and it’s the least original film in a career that has been built entirely on impersonation. There were just enough moments when it reminded me of that silly, infectious glee that Emmerich’s films used to bring at the height of his career, and so Moonfall squeaks by, earning a passing grade from me, if not a full blown recommendation. –Patrick Gibbs