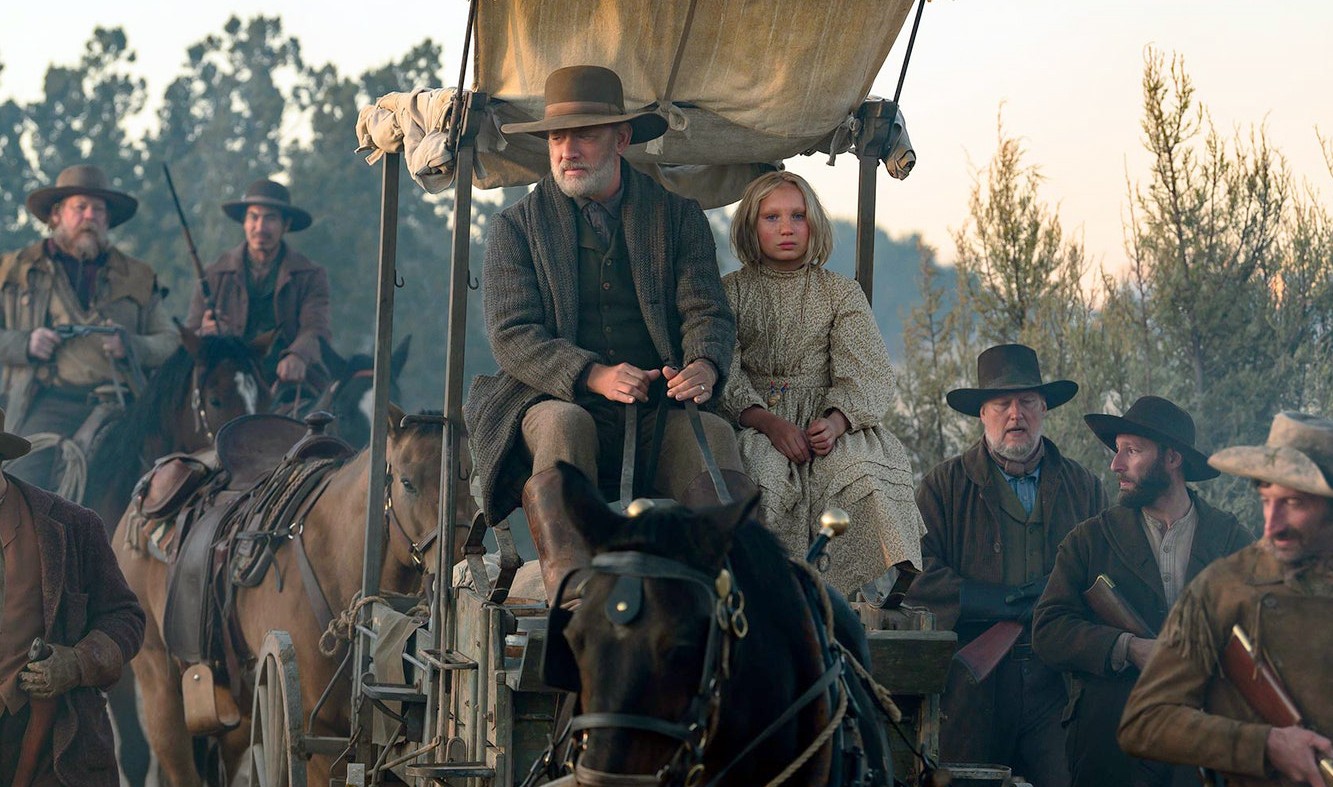 Film Review: News of the World

Playtone and Pretty Pictures
In Theaters: 12.25

Being a film critic is a tricky thing. While there are those who think critics are tough to please, and that we love to trash films, this logic simply doesn’t hold up. I’ve literally seen around two hundred new films this year, and you don’t do that unless you love movies. But you also don’t watch that many without occasionally finding yourself wondering if it deadens your ability to thoroughly love a movie the way you used to—when you were picking and choosing what to see, and each new film was still a bit of a novelty. Sometimes I do indeed wonder: Do I still love movies that much?

News of the World, which is adapted from the novel of the same name by Paulette Jiles, takes place five years after the end of the Civil War. Captain Jefferson Kyle Kidd (Tom Hanks), a veteran of three wars, is now a traveling storyteller, carrying with him copies of all of the major newspapers and sharing stories of devastating catastrophes and gripping adventures from the far reaches of the globe.

In the plains of Texas, he crosses paths with Johanna (Helena Zengel, System Crasher), a 10 year old taken in by the Kiowa people six years earlier and raised as one of their own. Johanna, hostile to a world she’s never experienced, is now being returned to her biological aunt and uncle against her will.

Kidd agrees to deliver the child to where the law says she belongs, and as they travel hundreds of miles into the unforgiving wilderness, the two face tremendous challenges of both human and natural forces as they search for a place that either can call home.

This is Hanks second teaming with director Paul Greengrass (the Bourne series), the other being the riveting, real-life thriller Captain Phillips, and hopefully there will be many more. The two-time Oscar winner is seemingly incapable of giving a bad performance, but when paired with Greengrass, he tends to achieve a level of raw, in-the-moment realism and moments of emotion that are so stunningly and nakedly authentic and free of any visible obvious technique that they almost transcend acting.

The Academy Award–nominated director, who co-wrote the script with Luke Davies (Lion) has never been better, bringing his signature sense of stark realism, but wisely choosing to set aside the shaky cam style that made him famous, and which served him very well in other films but isn’t right for the material. Greengrass takes us for an epic journey as we follow the Captain and Johanna through an awesome series of harrowing set pieces, each more stunning than the last. The masterful surety of the direction—from the gorgeous shot selection to the flawless pacing and, of course, tge incomparable reality of the performance—all point to an artist at the top of his field delivering some of the best work of his career.

Hanks’ raw power is impossible to overstate, but young Zengel is extraordinary as Johanna, matching him all the way and creating a vivid characterization that you can’t help but fall in love with. The two make for a remarkable screen pairing, and the performances are a collaboration that is so intrinsically linked that it feels like they should share one Oscar nomination.

Cinematographer Dariusz Wolski (Crimson Tide, Pirates of the Caribbean, The Martian) and editor William Goldenberg (Argo, Zero Dark Thirty) each deliver impeccable work that ranks not just among their best, but the best in recent memory, and James Newton Howard‘s beautiful and score is the icing on the cake.

This emotional and harrowing film has a timeless quality to it, and yet the themes of anger and division as the nation tries to heal after a period of being torn apart are almost disarmingly topical.

News of the World took me back to the kind of films that cemented my obsession with the medium, such as Dances with Wolves and the ’90s works of such directors as Steven Spielberg, Robert Zemeckis, Ron Howard or Joel and Ethan Coen, just to name just a few. It took me back to when every moviegoing experience made me feel like I was in the “Let’s Go To The Movies” production number in John Huston‘s Annie.

News of the World is a testament to both Hanks and Greengrass as artists who continually strive to grow and evolve, and to the power of the movies to take us on an epic journey, throughout the world and inside ourselves. It’s one of the most stunningly perfect films I’ve seen in at least a decade, and a nice reminder of why I love what I do. –Patrick Gibbs