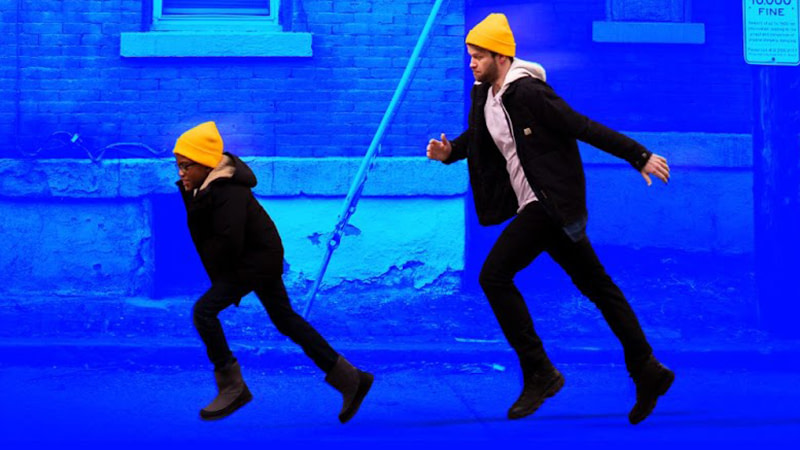 Photo courtesy of Ayin Films and In Blue

Note: the following review contains full discussion of the plot of the short film.

There’s a lot to be said about how we’re raising the next generation. Kids spend a lot of time online interacting digitally, and many are worried about the social consequences. No, I’m not talking about Gen Z. I’m talking about GenAlpha—and so, it would seem, are Doron Drew Feldman and co-writer Derek Weissbein in their 2022 short film, Pivot Pals.

Pivot Pals centers around a young boy named Dax (Cameron L. Keitt) who’s still reeling from the loss of his father and trying to escape having to spend the day with his mother’s new boyfriend, Clay (Ty Fanning). It’s a deeply personal film for Feldman, who lost his father as a young boy and had a similar experience to what Dax experiences in the film. According to a press statement by Feldman, the film is about masculinity, grief and our relationship responsibilities. That’s a lot to tackle in 18 minutes and while I respect the effort, I’m not sure it all connects in the end.

We’re first introduced to Dax in his bedroom as he listens to a podcast. Memories of being with his father flash as the podcast hosts discuss grief and what it means to grieve. Clay arrives, and after a consoling pep talk from his mom, Jess (Lyindaa Russell), Dax gets in Clay’s car. This quickly sets up Dax’s grief at losing his father and lets us know that Dax is quiet and intelligent. In a longer film it would feel a little on the nose, but it’s perfect for a short of this length. A little more subtle is this introduction’s showcase of Dax trying to find answers to his feelings through the technology available to him, something Feldman wouldn’t have been able to do in his childhood and which immediately sets the film apart from its real-life inspiration.

Clay is doing his best with what he has both in the financial department and in the common sense department, which isn’t much in either case because Clay surprises Dax with expensive tickets to the day’s Steelers game despite knowing that the kid doesn’t care for sports. Dax refuses to go with him and Clay is incredibly upset, saying he spent his whole paycheck on the tickets. It’s a very simple display of the anger men often aren’t raised to hide, but it works for the runtime. Dax runs off after Clay yells at him and Clay is forced to be understanding; to be kind. This is Clay shifting gears and reaching out to the soft, introspective kid as best he can. I imagine this is what Feldman is referring to when he says the film is about masculinity and responsibility.

Clay, who loves sports, gets frustrated when Dax, who doesn’t, refuses to go with him. Masculinity. After shaking off the initial anger, Clay realizes he’s the adult here. Not only that, but he’s got to be more understanding of Dax’s wants and needs. Clay’s responsibility that day is to help this hurting kid ease into the next chapter of his life, one where his mom is with somebody else. Relationship responsibility.

Where the themes don’t work for me is at the end. After a day of struggle and hijinx, Clay and Dax return home. Clay’s now in debt, Dax is shaken up and maybe even scarred and Jess is pissed. The couple starts to argue about whether or not they should just call it quits when Dax steps in. He delivers some sage advice about relationships and how it’s important that they work through the hard stuff. When Clay asks where he learned that from, Dax smiles and says, “a podcast.”

While many, including myself, may look at the current generation’s predisposition toward being extremely online as a probable negative, Pivot Pals makes the case that they might just become the most intelligent generation of us all. We could stand to listen to them as we move forward into the future. As the film wraps, Dax listens to another podcast. The hosts are discussing friendships between old people and young people, saying, “Adults who form relationships with a younger generation are three times as likely to be happy as those who are not.”

Considering the aforementioned themes, this is an odd note to end on. There’s no real conclusion to the masculinity thread and while Dax’s grief got mentioned again briefly when he found an engagement ring in Clay’s pocket, that’s left on the table as well. So what is being said at the end here? (Other than a slight twist on the general ‘friendship is good’ message that ends a lot of kid-centric films, that is.)

The time period stands out more than anything, especially knowing that it differs from Feldman’s real-life inspiration. Pivot Pals is set in 2022, and Dax is quick to correct the adults in his life when they refer to him as being Gen Z—he’s GenAlpha. He finds answers in technology. Despite the apparent commentary on things like masculinity and grief, Pivot Pals’ ending message is a familiar one of kindness and friendship. What makes it unique, however, is its optimistic outlook on what the kids of today and tomorrow have to offer us, and what they can offer themselves when the hard times come along. –Max Bennion