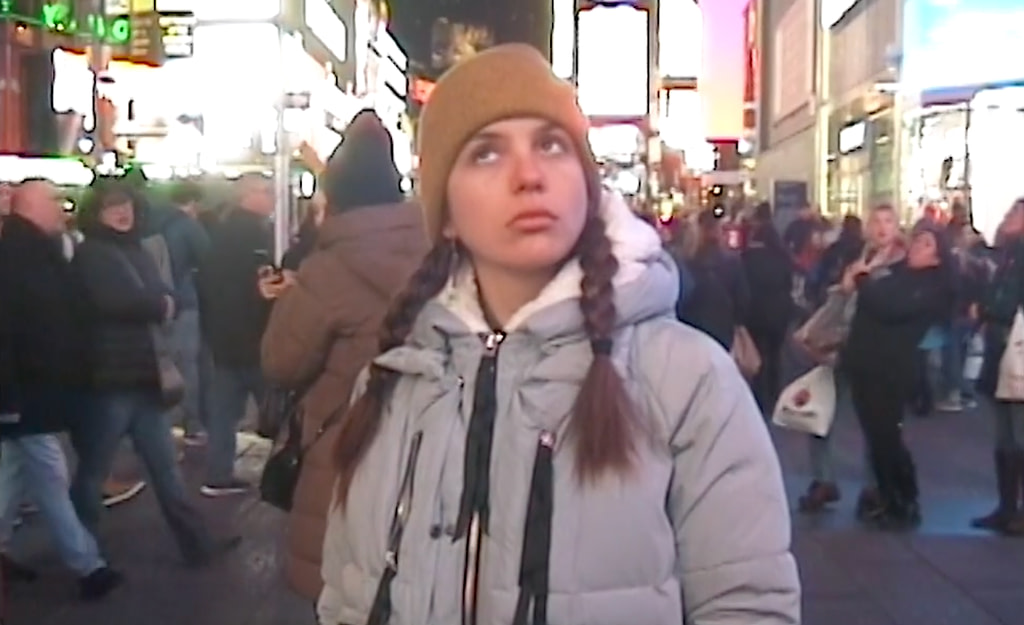 Sometimes you watch something and immediately get a feeling. That feeling might differ each time: sometimes it’s “I’ve seen this before and it was inside myself,” sometimes it’s “This is what movies are supposed to be,” and sometimes—very rarely—it’s “The Gods of True Indie have returned and given us another blessing.” Not ringing any bells? Those must just be the feelings I felt while watching Justin Zuckerman’s Yelling Fire in an Empty Theater.

The film follows recent college grad Lisa as she makes the move from Florida to New York to live with Holly (their moms “are friends,” as Holly iterates) and Holly’s off-putting boyfriend, Bill. It’s only meant to be a temporary living situation until Lisa can move in with her own boyfriend, which is good news for Lisa as it quickly becomes apparent that both this living situation and New York City as a whole are not going to be the effortless dream she expected. But this doesn’t come without portent.

The opening scene sets the stage and tone with ease as Lisa stands in the airport. A woman next to Lisa asks about her destination, and she explains that she’s moving to New York. The woman congratulates her, then hands her a $50 bill and a warning: “I don’t know what you think New York is going to be like, but I have to tell you, it won’t be.” The narrative that unfolds after this only proves her right. During her time in the city, Lisa experiences the surprising simultaneity of boredom and fear, excitement and anxiety that only living in New York can bring … or so I assume.

I hate to admit that I’ve never been to New York. However, Yelling Fire never once let that fact disconnect me from Lisa’s story. Nor was it ever a drag! The film works so well because, while it’s ultimately commenting on New York and the (likely) shared experience of every post-collegiate 20-something who moved there, it’s also just the story of being 20-something in general. I laughed out loud multiple times because the characters are so accurate to those you meet at that age, the scenes (particularly a dinner scene about halfway through) so genuine in their portrayal of attempted bohemia that it almost reads as a documentary. Then again, that might also be down to the shooting style.

I’ll be honest here: Initially, the MiniDV format worried me. Indie films often take on a retro look because it’s cheaper than renting an ARRI, but they can also take on that look for aesthetic points. I immediately wondered if it was going to try too hard to seem cool and quirky, emulating nostalgia-pieces like Jonah Hill’s Mid 90s for the sake of surface level “indie vibes.” Not at all. Yelling Fire’s use of the MiniDV gives it a sense of realism; there’s none of that sheen that Hollywood or even indie films with higher production present. It draws you into the events and makes you feel like you’re sitting in the apartment, holding the shitty video camera, experiencing and commiserating with Lisa.

Isadora Leiva works wonders as Lisa. She is immediately likable and only gets better as we spend more time with her. Instead of playing Lisa youthful to the point of naivety, Leiva’s performance makes her into a kind of everyman character. She may be naive, but she’s not at all innocent and only as naive as any one of us would be in her situation. What makes Lisa work so well is her tenacity and how that conflicts with the inherent chaos of the life she’s chosen.

Everything that happens to Lisa is testing her persistence and her ability to put up with New York’s bullshit for another minute. Every friend Lisa makes can just as easily become a weapon at the will of life in New York as it threatens to break her. It’s a hell of a conflict full of dramatic moments, but the tone is never shaken. It’s dry, satirical and a pleasure to sit with.

The other lead actors—particularly Kelly Cooper as Holly and Michael Patrick Nicholson as Bill—anchor the film with their performances. Their relationship is complex and crumbling, supplying the film with the necessary dramatic and emotional beats, and some excellent comedic timing on occasion. Still there are a few moments where the bite of the arguments feels a bit toothless and dulled. The editing isn’t perfect, either, lingering longer than it should. This gives certain sequences a sort of choppiness. However, these moments are few and far between and sometimes even add to the rough charm of the movie.

Ultimately, I walked away from Yelling Fire in an Empty Theater with a smile on my face. Even without having been to New York, viewers will find it easy to relate to and connect with. It’s a timeless, double-layered slice of youth and indie culture that is sure to gain praise, and I’m happy to say that it deserves it. –Max Bennion