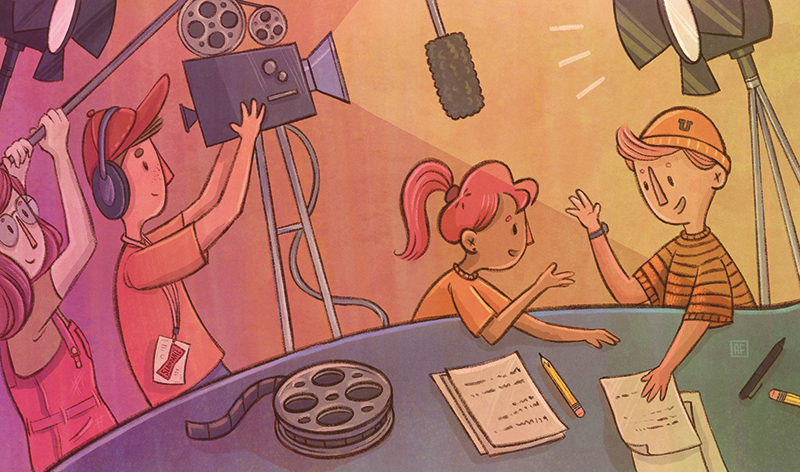 An Artistic Alliance: Slamdance’s Collaboration with the U of U Faculty and Film Students

The Slamdance Film Festival fosters a grassroots community for artists to showcase their work freely and independently. In 1995, Peter Baxter cofounded Slamdance alongside filmmakers who refused to depend on the excessive and meretricious film industry. Baxter, now the President of Slamdance, persists in providing a community wherein independent filmmakers can showcase their raw creativity. He and Slamdance Festival Manager Alina Solodnikova work with the University of Utah’s Department of Film and Media Arts professors—also twins and independent filmmakers—Miriam and Sonia Albert-Sobrino, to offer students roles in the Slamdance Film Festival.

“As filmmakers and educators, it is always our goal to give our students the necessary skills to become proficient filmmakers who can find real job opportunities, if possible, even before graduating,” Sonia says. In August of 2016, the Albert-Sobrino sisters reached out to Baxter to ensure students’ future success. “Slamdance came to mind first and was the logical place to try, given our very similar understanding of independent cinema and its geographical proximity,” Miriam says.

The Albert-Sobrino sisters’ appeal to collaborate with Slamdance came somewhat naturally, since they share an emphasis and passion for independent filmmaking. After the sisters reached out to Baxter, he began to conduct the Anarchy Workshop at the U. “We spoke about doing more together, and out sprung this partnership,” he says.

“As filmmakers and educators, it is always our goal to give our students the necessary skills to become proficient filmmakers who can find real job opportunities.”

The Slamdance community supplies students with indispensable experience for their advancement in the film industry. One success story is that of Summer Florence, a U graduate who now works for Slamdance. “I would not be where I am without Slamdance,” Florence says. Graduating from the U last spring, Florence has worked with Slamdance for the last two years, thanks to Baxter’s and the Albert-Sobrino sisters’ converging aims to support emergent, independent filmmakers. “Peter Baxter and the Slamdance family are great at creating a positive learning environment in which our students not only get to learn how a festival operates, but also do that in a very welcoming setting—all of that, while actually getting paid, as well,” says Sonia.

Florence’s latest short film, Salty Plastic, illustrates the six-year period following her withdrawal from the LDS faith and BYU. Her reclamation of individuality and independence inaugurated her passion for film and prompted her to attend the U. During her senior year at the U, the Albert-Sobrino sisters recommended her for a production-management position with Slamdance. This allowed Florence to exercise her educational skills and knowledge. For this upcoming Slamdance Film Festival, Florence has advanced to the position of Associate Producer.

The Albert-Sobrino sisters’ and Slamdance’s parallel goals led to a collaboration committed to developing student’s experiences, knowledge and abilities. “Sonia and I do our best to champion independent cinema among our students,” Miriam says. “Slamdance is the epitome of that, not only in origin but also ideologically.” Slamdance’s manifest mantra, “By Filmmakers, For Filmmakers,” coalesces with the Albert-Sobrino sisters’ esteem for independent cinema and upholding artistic integrity.

“Peter Baxter and the Slamdance family are great at creating a positive learning environment in which our students not only get to learn how a festival operates, but also do that in a very welcoming setting.”

The sisters also help their students who are interested in submitting films to a festival “understand how to make their projects in a way that, while reading honest and genuine to their style and interest, can still be competitive in this challenging industry,” Miriam says. “Being there, seeing the work of others and getting to know the talented people who work and screen their work at Slamdance is priceless.”

The Slamdance Film Festival necessitates collaboration, energy and ingenuity. “The festival in Park City requires lots of energetic production staff ready to engage with our DIY spirit: building theaters from the ground up, recording interviews for Slamdance TV, handling box office and balloting, rush lines, etc.—it’s a lot!” says Solodnikova. “The U students have been an integral part of the festival team in the last several years, and we can’t wish for a better group of people to weather the storm with, sometimes quite literally.”

Florence says, “Essentially, I support the Festival Producer, Michael Morin. We work together to ensure that Slamdance’s production needs are met.” They coordinate events, manage staff, obtain city permits and many other tasks to ensure the festival runs smoothly. “Slamdance gave me the opportunity to be seen as an equal and allowed me and my voice to be respected as part of something. I am so grateful.” Slamdance’s atmosphere initiates students’ transitions from film students to professionals.

“The U students have been an integral part of the festival team in the last several years, and we can’t wish for a better group of people to weather the storm with, sometimes quite literally.”

“We are confident that since our partnership began in 2016, our students are more aware today than ever of what independent cinema really is in practice, and that the best place to find it during the festival season is Slamdance,” says Miriam. This collaboration is beneficial for students because the connections they make serve as a door into the film industry—and Florence identifies that Slamdance celebrates a different side of film. “In the face of this big Hollywood film industry, I struggle because I don’t really want to be a part of that,” she says. “Slamdance is a sort of haven.”

The festival recognizes that there is value in unconventional mediums, ideas and techniques. Slamdance remains committed to its goals and roots while forming partnerships along the way. “Slamdance really is, to its core, 100% invested in fostering a community for emerging artists,” says Florence. The 2020 Slamdance Film Festival runs Jan. 24–30. Visit slamdance.com to buy tickets or learn more about a festival that embodies genuine artistic integrity and endorses rising filmmakers.