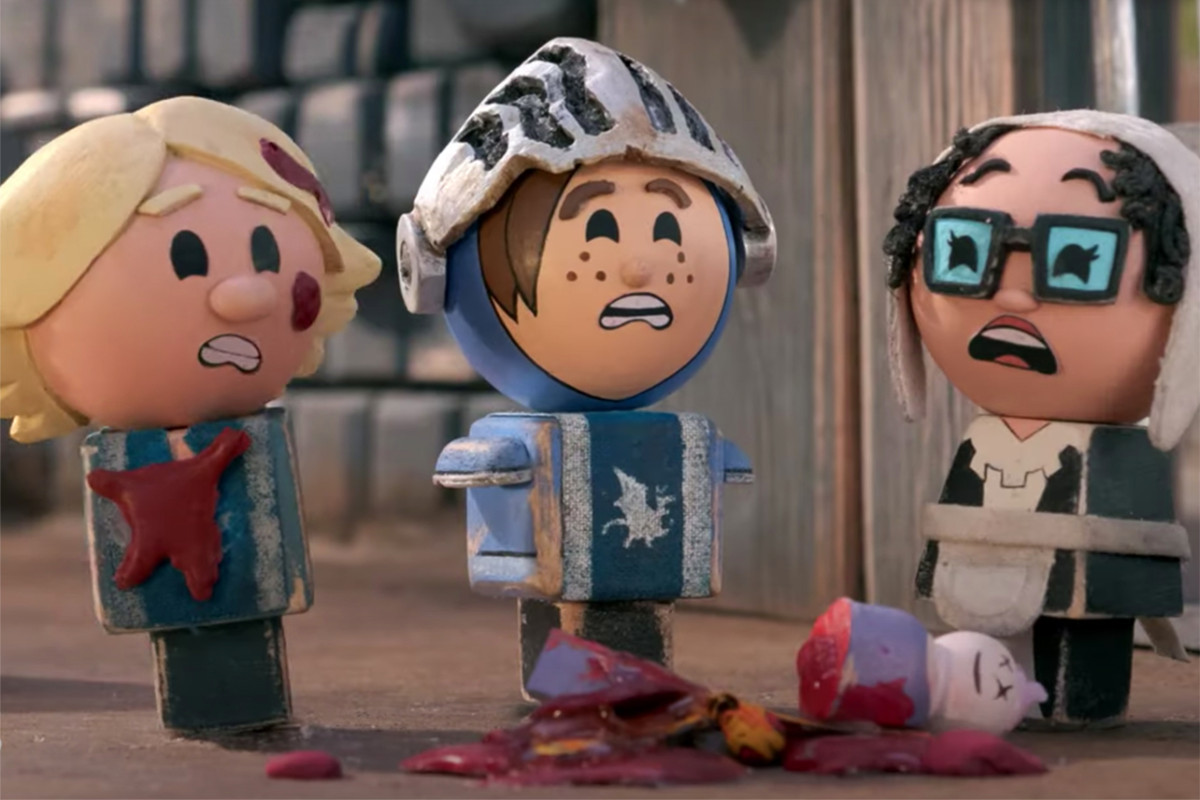 At its best, the TV-Ma can be an artistic boon, allowing adult stories that require adult content to be told the right way. But at its worst, it’s a cheap and exploitative device that tries to draw viewers to content that has very little else going for it apart from the ability to showcase harsh language, graphic violence or nudity. The vast majority of these shows fall somewhere in between, making good use of the license at times and at others relying on it a bit too heavily to the point where it starts to feel tedious. I’ll say that, after 10 years of being a critic, I’m a bit desensitized and not easily offended. But Crossing Swords, the new animated medieval comedy premiering on Hulu, wherein all the characters are made to look like “peg people” toys, did offend me—as much with its bawdiness as it did with its sheer laziness. It’s probably the most ill-conceived, inert and juvenile exercise in shock value comedy that I’ve seen since The Happytime Murders.

Crossing Swords centers around young Patrick (voiced by Nicholas Hoult), a goodhearted peasant who has always been the black sheep of his family because he wanted to be a knight instead of a criminal like his siblings. Patrick lands a job as a squire at the royal castle, but his enthusiasm dims when he learns that his beloved kingdom is run by corrupt and depraved monarchs, including a sex-crazed Queen. Even worse, Patrick’s valor made him the enemy of his family, and now his criminal siblings have returned to make his life a living hell.

I’m tempted to compare this colossal misfire to Fish Police, the infamous ’90s dud that personified the pathetic attempts by the big networks to cash in on the success of The Simpsons, but it’s honestly not even that good. It feels more like one of those YouTube videos where people goof around with toys, but with more money for animation and writing that makes homemade YouTube clips suddenly look pretty good in comparison. I can only assume that creators John Harvatine IV and Tom Root are going for The Lego Movie with very R-Rated sensibilities, including full frontal cartoon nudity and a steady stream of profanity and vulgarity that seems to come straight from a junior high lunch room.

But they seem to have forgotten there was a point to that movie being done with Legos. While the animation is good and the style kind of cute, the peg people gimmick here serves no purpose beyond trying desperately to evoke the memory of Robot Chicken (both Harvatine and Root worked as producers on the Adult Swim hit). There are scattered moments where it comes close to almost being mildly amusing, but that’s the best that can be said about it.

The most perplexing aspect of this show is why a talented and charming star such as Nicholas Hoult would waste his time on it, and he’s not the only one. The voice cast includes such stellar talent as Luke Evans, Tony Hale, Yvette Nicole Brown, Breckin Meyer and Seth Green—okay, so those last two are  no surprise—and especially for Hoult’s sake, I hope Crossing Swords gets canceled soon and is quickly forgotten, rather than become a serious blemish on his filmography.

Even in this time of stay-at-home orders, there are plenty better things to do with your times then to waste it on even one episode of this boorish, adolescent idiocy. If you want irreverent medieval comedy in animated form, you are far better off revisiting Disenchantment, and I say that as someone who never bothered finishing season two.  –Patrick Gibbs