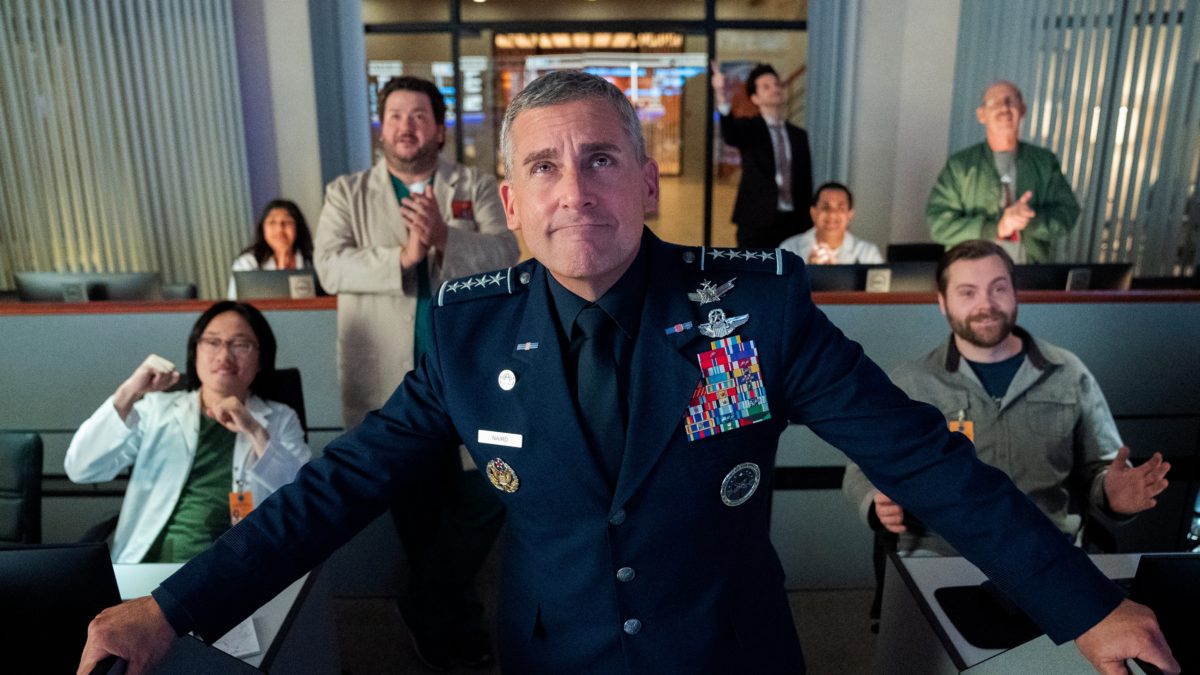 When it was first announced that Netflix would be making a Space Force series starring Steve Carrell, who would be re-teaming with Greg Daniels, creator of the American version of The Office, I think most of us basically assumed we’d be getting Dunder-Mifflin aboard a space station. But after watching the series, it’s clear that the aim is to create a 21st century M*A*S*H or Catch-22. Space Force may not entirely accomplish that bold mission, but it certainly achieves lift off.

When we are introduced to General Mark Naird (Carrell, who is doing a Buck Turgidson voice that comes and goes), he is receiving his fourth star. Mark hopes to command the Air Force, but is given the unenviable assignment of heading up the infamous, newly formed sixth branch of the US Armed Forces. The General then uproots his family and moves to a remote base in Colorado. Here, he and civilian scientist Dr. Adrian Mallory (John Malkovich) are tasked by the White House with getting American boots on the moon once again. The team is to do this as quickly as possible so that POTUS—who is never directly mentioned by name, but there is no mistaking his identity—can show off the size of his rocket and declare total dominance over space.

The 10-episode first season—there is no question they are counting on a second—is not without kinks to be worked out, but the top-quality production values count for a lot. This looks and feels like a movie, which helps set it apart from The Office, even in the moments when Carrell is slipping into just playing a more macho Michael Scott. The individual directors (including Dee Rees of Mudbound fame) do stellar work, and the cast is excellent all around, with a hilariously uptight Malkovich stealing the show with a performance that is refreshingly low key without ever seeming phoned in. But there’s no denying that even with a few handicaps, Carrell is a great comic lead, and there’s no show here without him.

There are a number of great supporting players: Tawny Newsome‘s snarky helicopter pilot and Diana Silvers as Naird’s teen daughter, Erin, standing out among the standouts, but Ben Schwartz also gets plenty of laughs. And if you are anywhere near the Waiting For Guffman fan that I am, you will likely squeal with delight at the presence of Don Lake as Naird’s right hand man, but feel mixed emotions at seeing the late, great Fred Willard as Naird’s father. I’m a huge fan of this comedic giant, and it pains me to say that his plot is my least favorite aspect of the show, as the cutaways to Mark’s senile and rapidly declining parents were just sad rather than funny to me. I also had issues with the vagueness of the subplot with Mrs. Naird (Lisa Kudrow).

Still, Space Force just gets better as the season progresses, and despite some difficulty in knowing how to approach the most politically topical characters and sometimes veering into Mad Magazine territory, the show wins big by nailing the question of how to deal with by far the biggest obstacle it faces: How do you root for Mark, Adrian and the Space Force when you don’t want to root for the manchild who stuck them with his brainchild? The last three episodes had me glued to my screen and wanting more.

Space Force isn’t perfect, but it exceeded my expectations. It remains to be seen where it goes from here, but the good news is that there is plenty of reason to care. I for one will be anxiously awaiting the launch of season two, and it will be quite interesting to see how the show deals with potential changes in the political climate. –Patrick Gibbs