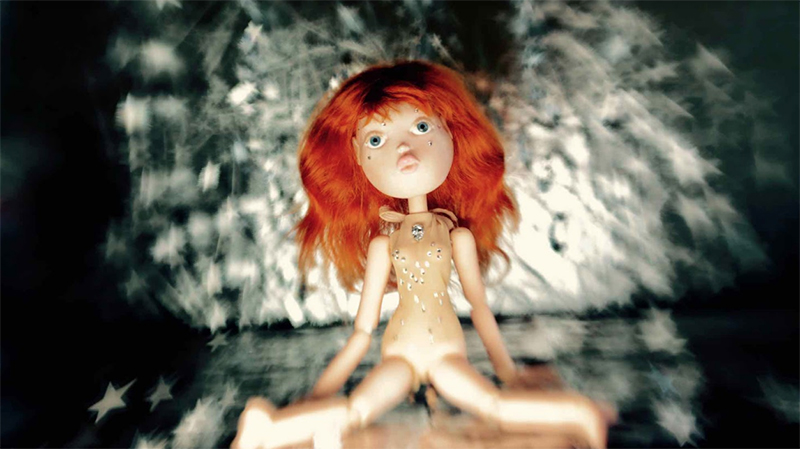 With a title like Dollhouse: The Eradication of Female Subjectivity from American Popular Culture, Nicole Brending’s debut feature dismisses any pretense of subtlety. The film is exactly what it markets itself as, an exploration of the manner in which female pop stars are exploited and misrepresented through the media and entertainment industry. With characters entirely comprised of plastic and clay dolls acted out through stop-motion, Brending takes a purposefully over-the-top approach to her filmmaking, resulting in a movie that is—in both a positive and negative sense—unforgettable.

Dollhouse follows the life of child star Junie Spoons, a mid-aughts success that mirrors the downward spiral stories of Britney Spears and Lindsay Lohan. Like these real-life personas, Junie’s endless struggle for happiness and acceptance is marred by abuse, kidnappings and the literal commodification of her body as a gay couple purchases her vagina in the film’s absurd final act. The most successful part of Dollhouse is the visual component, as Brending’s careful construction and movement of the puppets allows for some moments of potent discomfort, where the grim realities of Junie’s troubled life are plastered onscreen with unapologetic exposure.

While the craft, technicality and conceptual commitment of Dollhouse are laudable, the storyline, execution and social criticism of Brending’s film fall flat. The biggest problem is her failure to commit to any one lens or idea. Especially when it comes to satire, criticism without a firm focus is a dangerous game. Never is it entirely clear who or what the main target or audience here is. Brending’s approach is classic “no one is safe”—pop stars, the media, the academic left, the working class, the LGBTQ+ community and more get at least a nod or a joke. While taking issue with some of the film’s edgier moments risks falling into the same language policing that Brending lampoons, giving creatives free reign under the guise of satire is equally misguided.

Recent films like The Square or Sorry to Bother You satirized similar outlets, though to much greater effect. Ruben Östlund and Boots Riley, respectively, also showed the complicity of everyone in these power imbalances, but they imbued their work with a stronger sense of real justice. Especially in Sorry to Bother You, nihilism was replaced by a revolutionary appeal to individual responsibility and communal support. In Dollhouse, the overwhelming feeling is hopelessness. The villains win, and Junie, the one slightly sympathetic character, perishes at their hands. Art has the unique opportunity to reframe reality. Most people born before Y2K will vividly remember the events alluded to in Dollhouse—we know the unfortunate endings of Spears’ and Lohan’s respective careers, and this film simply rehashes and exasperates the drama under the guise of feminism instead of offering a unique take.

Even greater than the narrative shortcomings, though, is the half-baked conceptions of Brending’s politics. The character of Trans Junie highlights the messiness of Brending’s agnostic grey area. The film’s entire second half follows a Junie super fan as he undergoes extensive surgeries to become his object of infatuation, eventually stealing Junie’s identity and career. The criticism on Junie’s lack of agency lands, but at what cost? Trans Junie is a mockery of a character, playing out as reality-ignorant bully with David Cronenberg-style grotesqueness (bulging eyes, mismatched doll parts). A news anchor even comments that everyone accepts Trans Junie solely to avoid lawsuits. Junie’s story aims to highlight the way young women are stripped of their personhood in order to please the ruling forces of the patriarchy, but ironically commits an eradication of trans subjectivity from American independent cinema.

Brending takes similarly sticky turns in her attempted jokes about black crime, working-class aspirations of fame and—in a completely unnecessary scene—Trump’s infamous “locker-room talk.” Brending tries to situate Junie’s tragedy at the heart of a web of societal tensions, but employs neither the critical nuance or the sheer runtime to do so accurately. Spears and her contemporaries have been repeatedly attacked by comedy outlets like SNL or South Park, and Brending enters into a dialogue when she, once again, rewrites celebrity history. While the film’s press materials would have you believe that Brending and her team are taking a more sympathetic approach, the messiness of her narrative and her lack of focus shows that she’s barely punching above the rest. –Audrey Lockie