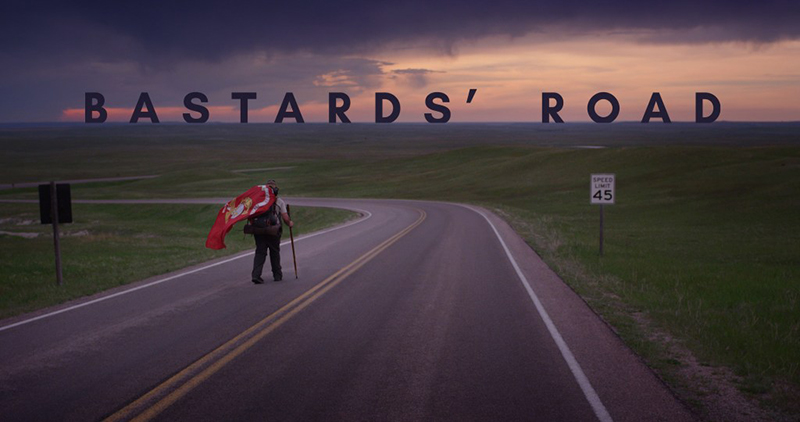 A lone figure walks along the American countryside with a red Marine Corps flag flying off of his backpack. With a long, unkempt beard and a battered appearance, Marine Combat Veteran Jonathan Hancock started his journey in 2015 walking from Maryland to Camp Pendleton, California. Hancock visited members of his unit, the 2nd Battalion 4th Marines, known as the 2/4 or The Magnificent Bastards, as well as visiting families of those who died in combat.

The Magnificent Bastards suffered some of the greatest casualties of the Iraq War—as the film states, that one out of four were either wounded or killed. However, for Hancock and other members of his unit who are interviewed in the film, being home and adjusting to civilian life was also a harrowing experience. The film focuses on the epidemic of suicide among veterans, who have a 50% higher suicide rate than the rest of the population, according to a Veteran’s Affairs report from 2019. Hancock, who suffered from PTSD and once attempted suicide, felt as though the only way to overcome his PTSD was to make this journey.

What I think Bastards’ Road does particularly well is allow Hancock and other members of his unit to express their experiences in their own words. At first, Hancock says that he feels despair over the fact that a lot of his friends are moving on, getting married and having children while he suffers multiple setbacks and strained relationships due to PTSD. However, through the interviews of the other veterans, it becomes clear that even though some of them have started families or seem to have everything together suffer from terrible PTSD from their time in combat.

While the walk is supposed to be a healing process for Hancock, it becomes clear that his outreach and presence makes a huge impact on the families of those killed in action and his fellow veterans. One former Marine, Roseanna Powers, lost her brother Caleb Powers and fiancé, Rick Lord, within a matter of two days to combat in Iraq in 2004. In the film, she states that sharing the burden of loss with Hancock, who took up her brother’s post immediately after he was killed, has helped her cope. One member of Hancock’s unit, Chris MacIntosh, gives a particularly impactful testimony to his own ongoing struggle with PTSD. However, he seems to light up when Hancock appears at his door, reminiscing in the happier times with him during his visit.

For me, Bastards’ Road was very eye-opening to just how bad the epidemic of PTSD and suicide is among combat veterans, especially those who have fought in recent wars. The film portrays a sense of hope in veterans creating their own network, breaking down the stigma of struggling with PTSD and reaching out to one another. There is only a little bit of combat footage included when necessary—this is shown in between interviews and beautiful shots of Hancock walking through different parts of America. These scenes made Hancock’s statement of wishing that his fallen comrades could experience the natural beauty all the more gripping. As a civilian, I cannot truly comprehend combat or the PTSD that these veterans went through, and the film gave me a compelling glimpse into the struggles when veterans face returning home and how they continue to push through them. –Ali Shimkus