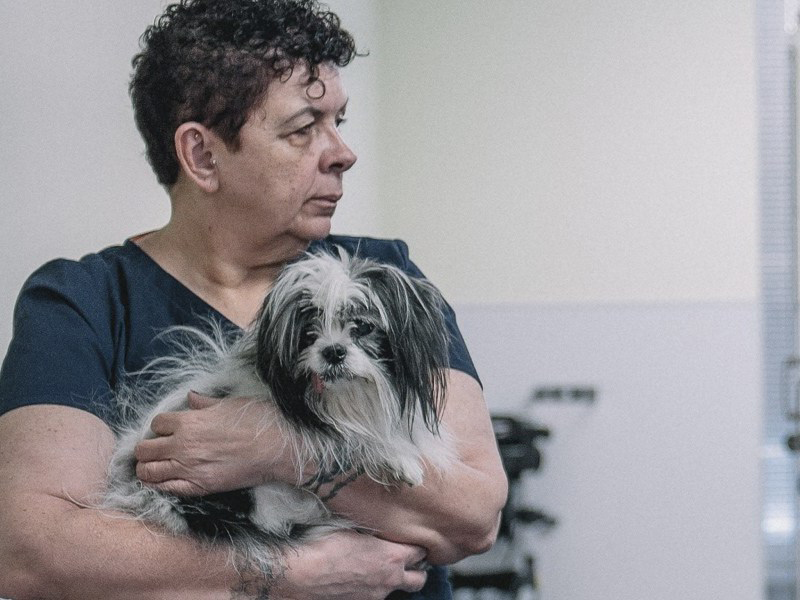 Love, loneliness and dependence are all themes that have been portrayed many times on film, but writer-director Heather Young approaches them from a different angle in her award-winning feature debut, Murmur. Donna (Shan MacDonald) is a single, overweight woman in her 60s, living alone and putting in community service hours at an animal shelter due to a driving-while-impaired conviction. Donna has a daughter who refuses to speak to her, and too often finds herself discovering her only source of comfort comes in a bottle.

Donna’s heartbeat is irregular, but her heart is also big. She is constantly taking in animals that have nowhere to go and, in some cases, are slated to be put down. Donna’s newest houseguest is Charlie—he’s an aging, sluggish mop of a dog who doesn’t do much, certainly doesn’t look like much and isn’t really wanted by anyone. Donna relates to these qualities and makes Charlie her new companion. She can’t stop with Charlie though, and soon she starts taking in more and more of the animals. It’s too many for her to handle on her own, but she refuses to give up on them the way she feels that everyone has given up on her. In doing, so she puts them ahead of her own health and well-being.

Young and cinematographer Jeffrey Wheaton have chosen to shoot the film in a boxy 1.37:1 aspect ratio, a bold choice that seems to be at least partially motivated by a desire to focus on the intimate story and the mundane aspects of day-to-day existence. This reminds me of the recent Paul Schrader triumph, First Reformed. In this case, it works most of the time because the film eschews camera movements in favor of meticulously framed static shots, some of which are strikingly beautiful—only occasionally do they feel awkward and unsure—and Young’s use of negative space underscores Donna’s quiet despair.

Not much else is there in terms of underscoring. Young has chosen to forgo a traditional musical score, a choice which is again very effective most of the time but would be helpful in the moments where it starts to feel like a short that has been stubbornly forced out to feature length. The choice to accentuate Donna’s feeling of isolation by having the other actors remain faceless and speak to her from off-screen was a good one in theory, but it ended up playing to me like an unintentional comedic reference to the adults in Peanuts cartoons.

The cast is made up mostly of first-time actors, and MacDonald gives a performance that is unpolished while still being raw, likable and committed. It may seem like a slight to praise Charlie as giving arguably the most impressive performance in the film, but I was genuinely astounded at how effectively Young was able to get this presumably untrained and aged animal to cooperate, and there is an undeniable chemistry between Charlie and Donna that is something truly special. For me, it really made the movie.

It’s hard for me to shake the feelings that Murmur is a good feature that would have been a truly great short, but it’s a skilled and intriguing piece of filmmaking from a thoughtful and promising new artist who clearly has a lot of passion. If you’re looking for a different kind of moviegoing experience from this year’s Slamdance, Murmur just may be just the ticket. –Patrick Gibbs