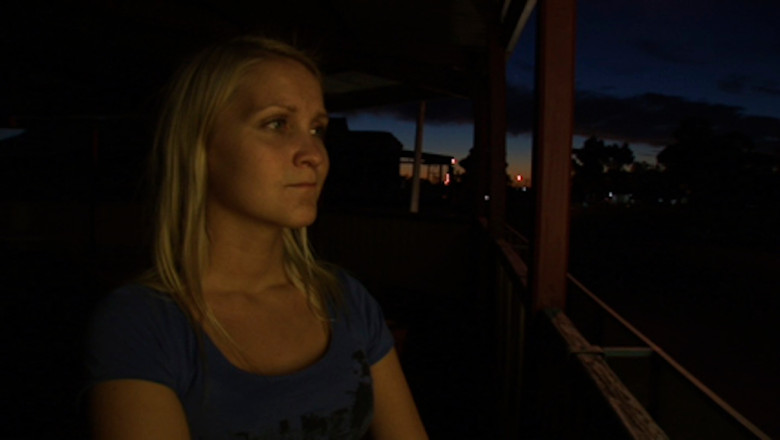 Somewhere in Western Australia is the remote town of Coolgardie, which touts a gold rush history and a population of roughly 1,000. At the hotel in town is a pub, where every three months, a new pair of foreign women comes to tend bar—the quarterly arrival of each new pair (“fresh meat”) is a big occasion for the town’s male locals. After getting their credit cards stolen and travel savings drained in Bali, Finnish travellers Lina and Steph decide to work the pub stint, hoping to replenish their funds while also having an authentic travel experience in the Australian outback.

Coolgardie isn’t anything close to what Lina and Steph were prepared for, however. They’re expected not only to serve pint after pint, but also to cater to and meet the local men’s expectations. They’re constantly accosted and mocked by their boss, who finds the women incompetent, diffident and unsuited to the job. The patrons are raucous and irreverent, and they incessantly chase after and harangue the two women.

At points, Hotel Coolgardie is so shocking and relentless that it’s hard to believe that the film is a documentary. Director Pete Gleeson takes a compelling, cinema vérité–style look into Lina and Steph’s lives, imbuing a sly and lighthearted humor throughout an otherwise astonishing narrative. Week by week, Gleeson follows along as the pair uneasily dodges the men’s unwarranted advances and humors some of the more eccentric characters that frequent the bar. (The unkempt and toothless Canman, for example, makes his living by delivering bales of aluminum cans, has a small dog who lives in his repugnant-smelling car, and expresses his concern for Lina and Steph by gifting them oddly flavored alcohols and silver-plastic-bead bracelets.)

Even more cringe-inducing—and strangely fascinating—than Lina and Steph’s predicament is the drunken, hot-blooded, toxic masculinity that saturates the isolated Coolgardie bar. From the start, the men make bets about how long it’ll take to sleep with one of the “barmaids.” One mean-spiritedly teases them with a spider, and another plays up his physical strength (“I can bench the both of you”). Where one patron might decry all women for his relationship woes, another might rush to be Lina and Steph’s white knight. A number of the men have no problem inviting themselves upstairs to Lina and Steph’s apartment to crash for the night on their couch—or in their bed.

Of the bar patrons, Gleeson offers viewers a long, unflinching look, more thought-provoking than condemning or scornful. While we enter Coolgardie with Lina and Steph—as outsiders—we unexpectedly leave with a sense of the confinement and remoteness that pervades the town for tourists and locals alike. Gleeson’s documentary captivates from intriguing start to bittersweet end, striking exactly the line between the bizarre and the decidedly real. Strangely, Hotel Coolgardie is also one of the most moving films being presented at this year’s Slamdance Film Festival. –Kathy Zhou