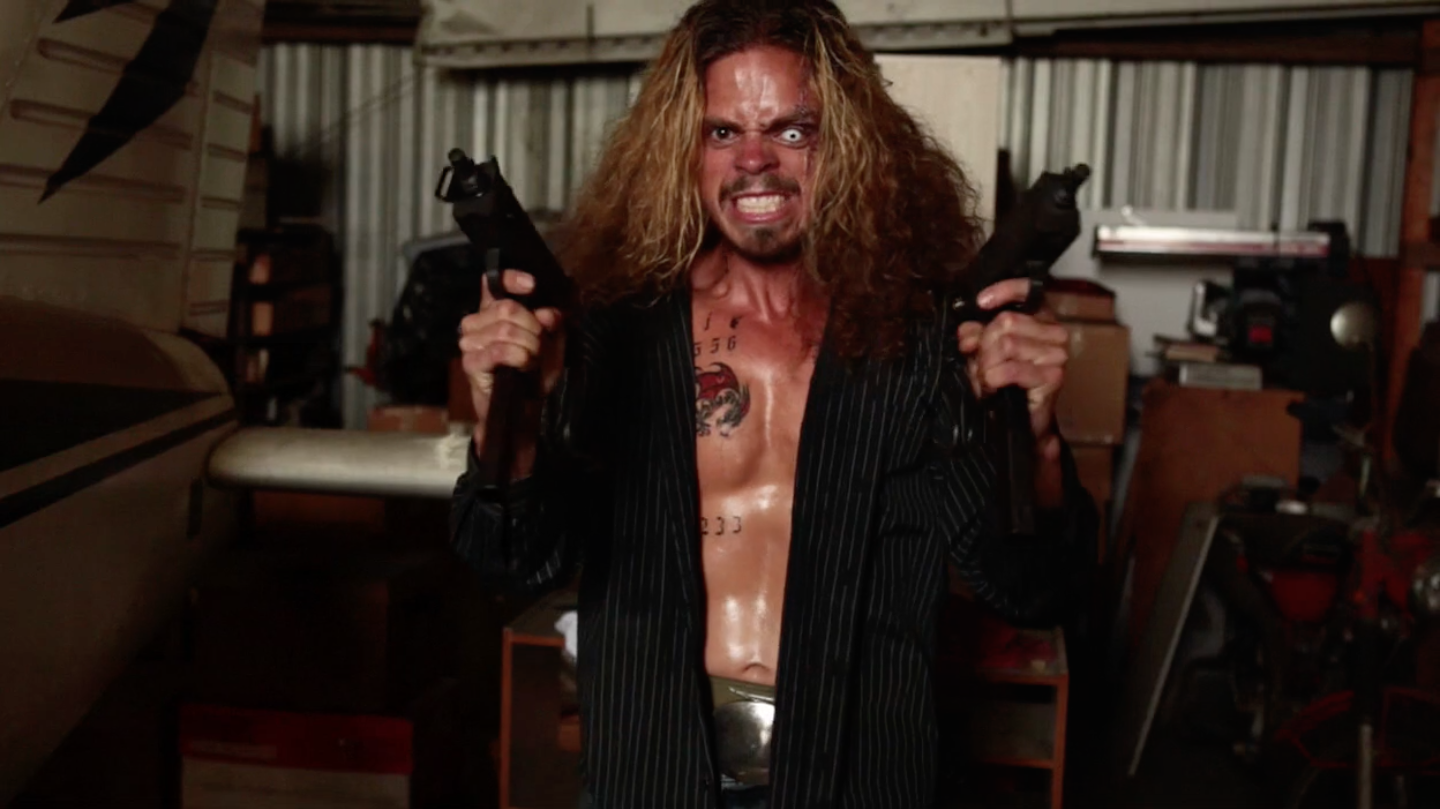 Somewhere on the border between genius and insanity, Germán Alonso, aspiring director/filmmaker/puppeteer, works on an endless array of puppets and small films in his studio—a rented-out hangar on a small Los Angeles–area airport. Alonso’s main project is Mexman, an idea Alonso first worked on for his senior thesis at USC. It’s a crazy story—one about a Mexican immigrant who comes to America for a better future, who then dies unexpectedly and is subsequently turned into a “cyborg slave.” It is an idea that has caught the attention of script writer Tyler Soper, as well as well-renowned producer Moctesuma Esperanza, who is willing to invest money into the project—if Alonso and Soper are able to successfully show him a promising script with well-crafted scenes.
While Soper has an awe and fascination with Alonso’s genius, he is somewhat forced into becoming the voice of reason guiding the Mexman project along on schedule. Alonso proves to be difficult to rein in and give focus to, choosing to spend a sizable chunk of his time crafting a puppet-based film for a decades-long crush and arguing about conspiracy theories with his friends. When Soper shows Alonso his script, Alonso yells, “Where’s the mysticism?” From then on, he is locked in a struggle with Soper for creative control, while Soper tries to use the best parts of Alonso’s ideas to make something polished for Esperanza. The results are not what either one had intended, and Soper goes as far as to suggest that Alonso needs to go to therapy and directing classes before he can help Alonso with Mexman, while Alonso muses that he doesn’t need a therapist when he can create a puppet to talk to.

Like its protagonist, Mexman feels a little disjointed at times, focusing on Alonso’s mental health, romantic struggles, ideas on Mexican culture versus American society, and struggles with self-image and relating to others. As the viewer, it is difficult to focus on one aspect of Alonso’s life while there are so many side stories going on, but at the same time, this aspect of the documentary shows Alonso’s lack of focus on the task at hand with his Mexman project. It’s easy to see the power struggle between Soper and Alonso as they craft out their contracts and try to collaborate, only to butt heads throughout the filming. Throughout Mexman, it becomes clear that there are deeper problems and trust issues in Alonso and Soper’s relationship than first meet the eye, even to themselves. Despite the problems between Alonso and (mainly) Soper throughout the film, director Josh Polon does a fair job in not antagonizing Soper, instead showing his point of view and his ultimate admiration for Alonso.

Mexman balances the question of Alonso’s sanity and the validity of his artwork with ease. His many puppets include a morbid figure who keeps on ominously growing—Alonso keeps adding to this figure, which he says represents “evil” or a “cancer of the brain.” The moments that linger on Alonso’s many eccentricities are some of the most powerful as well. One particular scene shows Alonso as he goes through his daily workout routine, running and jumping through a field of flowers, with his long curly hair flying behind him. Even though it’s hard to follow Alonso’s train of thought due to his overactive imagination, it is easy to sympathize with him and see what Soper admires so much about him—through Mexman, we see Alonso as a creative genius with a truly unique take on the world around him. –Ali Shimkus